The sons and daughters of Adam and Eve continued to turn their backs on their Creator and do their own thing. Their children and grandchildren were so wicked that God decided to judge the earth and everything that lived on the earth. But God knew one man who followed Him. That man was Noah. God spoke with Noah and told him that He was going to judge the earth by water—a global flood. However, God had chosen to spare Noah. So He told Noah to build an Ark, which would hold his wife, his sons, their wives, and two of every kind of air-breathing, land animal and bird (and seven of some). This boat was huge. It was approximately 450 feet (135 meters) long and 45 feet (13.5 meters) tall. 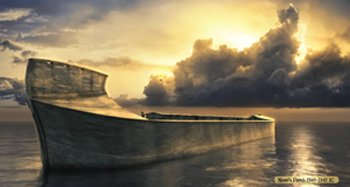 It took Noah quite a while to build his boat (probably around 70 years), but once he, his family, and the animals were on board, God closed the door. Then for 40 days and nights, the water in the atmosphere (rain) fell. The fountains of the great deep (waters in the earth) broke open. For 150 days, water flooded the whole earth, covering even the earth’s highest hills by over 22 feet (7 meters). And the waters remained on the earth for many more months.

Finally, just over a year after the Flood started, Noah and his family could leave the Ark. All the people and land animals outside the Ark died. The waters were so powerful that tons of rocks and dirt were moved around during the Flood. Plants, animals, and even humans became buried in the muddy sediments. The remains of some of these have been dug up today; they are called fossils. Not all fossils are from the Flood, but most of them are. After the floodwaters drained into the ocean basins, the whole earth was changed—mountains, valleys, canyons, the climate … everything. This happened around 4,300 years ago—approximately 2348 BC.

When all members of a certain type of animal die out, that animal is said to have gone extinct. Extinction may occur because of sickness, disease, starvation, changes in habitat, or by hunting. Many animals have become extinct in the past, and extinction can happen to any animal population. One of the more famous extinct animal groups is the dinosaur. When talking about the dinosaurs, or any other extinct animal, we must keep some things in mind. First, we know that dinosaurs were real because the Bible says that land animals were created on Day 6, and since dinosaurs are land animals, they were included in this creation (sea and flying reptiles such as pteranodons and plesiosaurs were created on Day 5). We also know that dinosaurs were real because their bones have been discovered and preserved for us to see.

Second, we must remember that when God sent the Flood to punish mankind’s wickedness, God preserved His creation by sending animals onto the Ark. The various kinds of dinosaurs would have also been on the Ark and preserved from the Flood. Dinosaurs could have fit on the Ark, since they were, on average, about the size of a small pony. And God would have preserved the younger representatives of the different dinosaur kinds to reproduce after the Flood.

Third, since representatives of the dinosaur kinds were on the Ark and survived the Flood, something had to have happened to them after that, which caused them to die out. There are many things that could have contributed to the extinction of the dinosaurs, including climate change, starvation, diseases, and hunting by humans and/or other animals (some of the same reasons animals today become extinct!).

Finally, we should remember that some animals that were thought to have been extinct for a long time have actually been found alive and well in different parts of the world (e.g., the coelacanth). So, is it possible to ever find a live dinosaur on earth again? Maybe …!

At the beginning of the Flood, the “fountains of the great deep” broke open, and warm water from inside the earth poured into the oceans. Eventually, the floodwaters covered the land. At the end of the Flood, the waters drained off the land into the oceans. They were still warmer than they are today from all the volcanic activity caused by the “fountains” breaking open and the land masses moving around. Being warmer, the ocean water would have evaporated much faster than it does today. Clouds formed and moved over the landmasses. But these clouds were bigger, carrying more water than today’s clouds, because there was more evaporation from the oceans. So, there would have been much more snow and rain in the years after the Flood.

Also, the snow fell over a much larger area—in places that do not have snow today. That is because the volcanoes had blasted so much fine dust high into the air that the sun’s warmth was blocked from the earth. So places which are warm today were much cooler then. With all the volcanic dust and clouds keeping the land cool, the snow on the ground would not have melted during the summer. Instead, it turned to ice, and gradually built up thick ice sheets which eventually covered about one-third of the land on the earth. After many years, the oceans cooled down. So with less evaporation, there was less snowfall. Also the volcanoes weren’t as active and the dust cleared away, letting the sun’s warmth through to melt the snow and ice each summer. Eventually the Ice Age was over. This Ice Age probably lasted around 700 years. Some scientists suggest that it peaked around 500 years after the Flood, and lasted 200 more years. (For more information, see Oard, M., Frozen in Time, Master Books, 2004.) From observations of today’s glaciers (found on mountain tops around the world), scientists can learn how ice sheets in the past may have changed the earth’s surface.

Although museums may claim that there have been many “ice ages” over millions of years, the truth is that there really was only one—it was one of the results of the Flood, and its effects can still be seen today!