“Once upon a time,” read the librarian, “millions of years ago, there lived a dinosaur. He was all alone. You see, he was the first dinosaur to evolve. He used to be a small frog-like creature. But over millions of years, he changed and changed until finally, he was a dinosaur with spikes on his back.”

Justin and Jessie gave each other a funny look. This story the library lady was reading didn’t seem right. But they couldn’t leave. Justin’s mom said she would be back when the story was over, so they just looked at the pictures as the lady continued reading.

When the story time was over, Jessie and Justin stood near the door to wait for Justin’s mom.

“Hi, guys!” It was Matt, their neighbor from across the street. “How’d you like the story?” he asked. “Wasn’t it great? Dinosaurs are super-awesome!”

“I love dinosaurs, too,” said Justin, “but that story was pretty silly. It didn’t say anything about God or how He made dinosaurs on Day Six.”

“Huh? You guys are weird,” Matt said and shrugged his shoulders.

“Are you all ready to go?” asked Justin’s mom as she walked into the room. “Hi, Matt! You’re supposed to ride home with us, remember?”

On the way home, Jessie turned to Justin. “Maybe we can tell him about what the Bible says,” she whispered.

When they all got back to Justin’s house, Mom went to fix lunch, but the three kids went to the backyard to play.

“Let’s be dinosaurs!” Matt shouted. “I’ll be the only one though, since you guys haven’t evolved, yet. You can be slimy toads. And you have to hop away so I don’t step on you and squish you.” 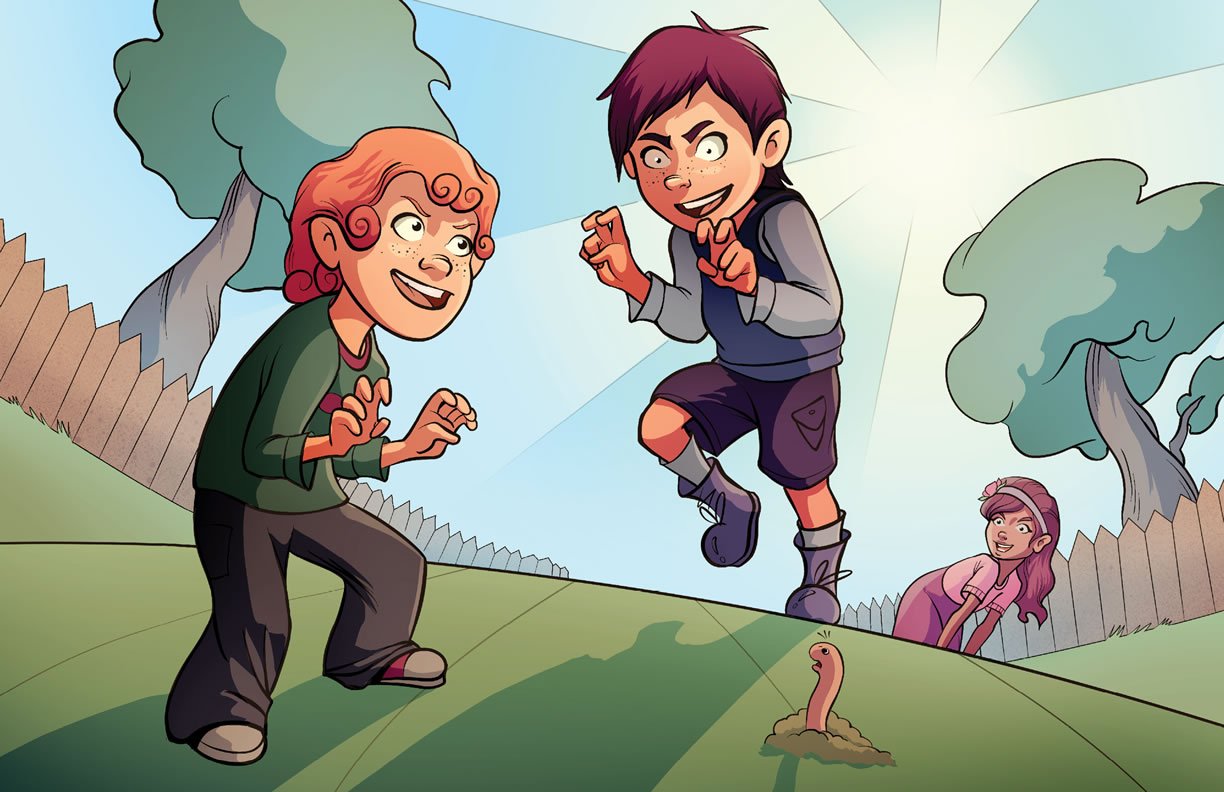 “Oh, brother,” said Jessie. She sat down on the steps. “I don’t think I want to play this game.”

“Well, because dinosaurs didn’t evolve. We all want to play dinosaur, but I want to do it right,” Jessie explained.

“But how do you know what’s right?” asked Matt.

“The Bible tells us,” Justin replied.

They went inside and washed up. As they were eating lunch, Justin’s mom asked, “Did you enjoy the story at the library today?”

“Yeah!” said Matt. “It was about a super-awesome dinosaur!”

“A dinosaur? Really? I thought the sign said the story was about a lost teddy bear.” Mom looked at Justin. “It was about a dinosaur?”

“Yeah. It was a dinosaur that changed from a frog-like thing. It said it all happened millions of years ago,” explained Justin.

“And he was lonely ‘cause the other animals weren’t all changed yet,” added Jessie.

“No it’s not!” cried Matt. “It’s true. That’s what they say on TV. And my brother told me the same thing. It says so in his school books. Everything evolved over millions of years.”

“Hmmm. Interesting,” Mom said as she stacked the dishes in the sink. “He learned it from a book? Well, the book I have tells it differently. Would you like to hear it?”

They all went outside. Mom handed a tiny shovel to Ellie and sat her down in the sandbox to play. Then she sat down on the porch with her Bible on her lap.

The kids gathered around as she turned to Genesis and read about how God spoke and everything was made in just six days.

“See, Matt? God made all the land animals on Day Six, and that includes the dinosaurs. Right, Mom?” asked Justin.

“Yes, that’s right. And God also talks about an enormous dinosaur He made called Behemoth. It was really strong and had a giant tail that swooshed back and forth like a huge cedar tree,” Mom added.

“Cool! I wanna be a Behemoth. Let’s play dinosaur, only we can all be dinosaurs now, like your book says!” exclaimed Matt as he ran out into the grass, stomping around like a giant Behemoth.

“Yeah! I’ll be T. rex, who chases after you two,” said Justin as he growled his biggest, loudest growl.

“Okay. And I’ll be a stegosaurus!” shouted Jessie. “Rarrr!!” 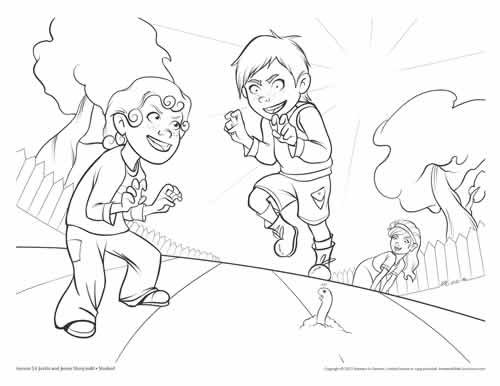