AiG and the Titans

I had the privilege of speaking at the Sunday morning chapel service for the Tennessee Titans this past weekend. Reggie, their team chaplain, has a long relationship with our ministry (Ken Ham spoke to the team several years ago), so he wanted an AiG speaker this year.

Over the last few weeks, we had been considering the topic to be presented, and we finally settled on the issue of death and suffering. With the recent tragedies in Kansas City and in Dallas, this seemed appropriate.

I arrived early at the team hotel in Indianapolis (as it was an away game for the Titans), and I got together with Reggie. While on the elevator, Reggie mentioned that AiG’s talk on racism would be well received. So on the spur of the moment, I changed my whole talk.

There were about 40 players and coaches at the chapel service. This was one of the most attentive and appreciative audiences I have had in a long time. They seemed very connected to the talk, and they asked a lot of good questions.

After the talk, the majority of the players and coaches came by to thank me and shake my hand. Several of the young men gave me a hug and said that they had never heard anything like this before! A few of them said that they wanted to visit the Museum after their season ends.

We gave everyone a copy of Ken Ham’s book, The Lie, and copies of my new DVD on death and suffering.

After the meeting was over, the Titans were kind enough to provide us with tickets for the game.

All in all, it was a really great day. 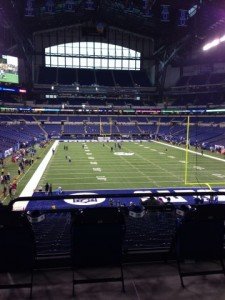 Previous Article An Amazing Year Next Article I Guess They Liked It!