On September 30 and October 1, we held a wonderful, two-day Día Latino event, with the first day at the Creation Museum and the second day at the Ark Encounter. Joe Owen, AiG Spanish ministry manager, recalls the challenges encountered, the Lord’s provisions, and the blessings seen at this year’s Día Latino event.

Answers in Genesis’ largest domestic outreach to the Spanish-speaking population is an event that we call Día Latino (Latino Day) at the Creation Museum. Our first Día Latino was in the fall of 2013.

For this annual event, we wanted to position our specialists and staff throughout the museum with interpreters to give our guests a summary of each room and how the rooms systematically work together to give us the biblical “7 C’s of History” message. We had various workshops with interpretation, as well as a conference about creation apologetics in our Legacy Hall. We also gave out a few prizes.

In 2013, this all sounded like a great idea, but we were left scratching our heads and asking, “How do we get our Spanish-speaking friends to come?” We took our then-small list of Spanish-speaking contacts in the United States and made good use of Google to put out a mailing to invite many to this special outreach. To our great surprise, after only a few months of preparation and much prayer, we received over 400 Spanish-speaking guests! For the next two years, the attendance more than doubled, and we received between 850–900 Spanish-speakers on each occasion!

So this year, we approached IV Día Latino with optimism but also with a big question mark: How can this work for both the Creation Museum and now the new Ark Encounter 45 minutes away? We decided to have two Día Latino celebrations: Friday, September 30, at the Creation Museum and Saturday, October 1, at the Ark Encounter. This would require much more help, a longer commitment of time for our volunteers, and some logistical challenges in setting up at two locations! We usually have only a few more than 20 volunteers for Día Latino on top of the regular Creation Museum and Answers in Genesis staff who go the extra mile to help. This year, however, would require more people!

With God’s help, we recruited 45 Spanish-speaking volunteers! We had the continued loyalty of ministry friends such as Dr. Hector Aybar and Dr. Maritza Lopez Aybar (a Puerto Rican couple who are both MDs and practice in Minnesota), and Dr. Marcos Garza-Madrid (associate professor at Maranatha Baptist University in Wisconsin, originally from Mexico) who travels here yearly with bilingual students and gives invaluable help to our team and all of our guests. Also David and Ann Casas come up from Georgia along with their children to interpret and to take pictures and video. As an example among others, a good friend and former colleague David Iduma has participated from the beginning in our outreach efforts without missing a single one! There are many other volunteers who yearly give their time and energy to come alongside our ministry and proclaim the truth about God’s Word and His gospel through Jesus to so many in their heart language. 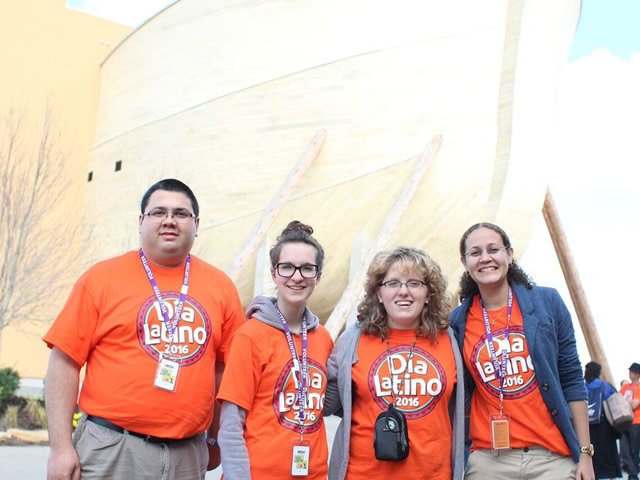 Dr. Marcos Garza-Madrid, associate professor (originally from Mexico) at Maranatha Baptist University, on the left with a few volunteers and Dr. Gabriela Carvalho (from Brazil) on the right. 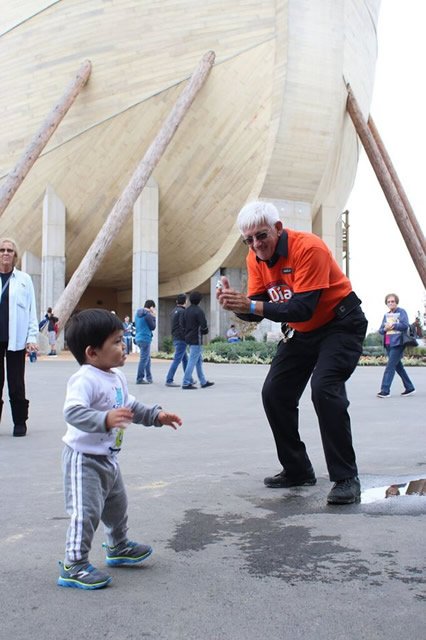 A volunteer entertains a young guest.

Well, this year’s Día Latino event extended to the new Ark Encounter and, again, we prayed and also did our responsibility in planning, even though it was hard to know exactly how it would work out. We prayed and planned for up to 1,500 guests at the Ark, set up Answers in Genesis specialists and their interpreters outside of the exhibits, and placed the other 30+ bilingual volunteers to help register, guide, and serve the guests in any way possible. On October 1, we received a whopping 2,116 (maybe more) Spanish-speaking guests. It was just amazing! 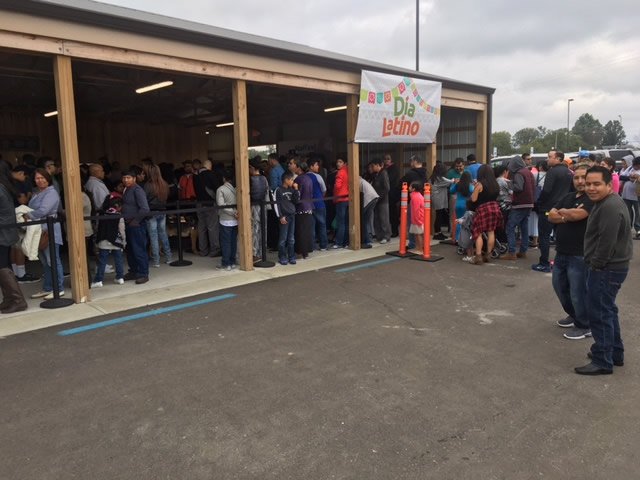 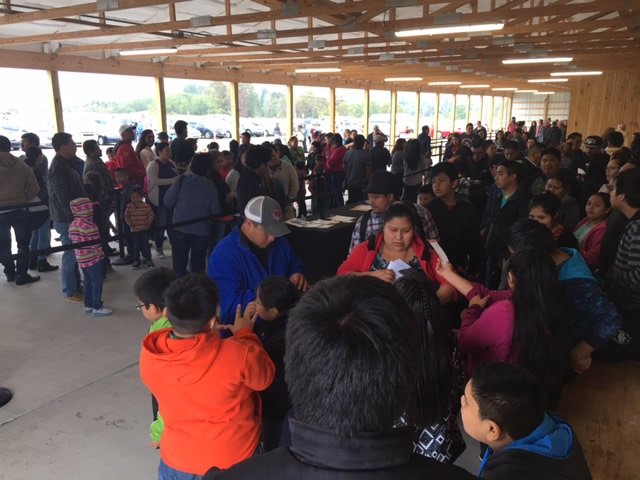 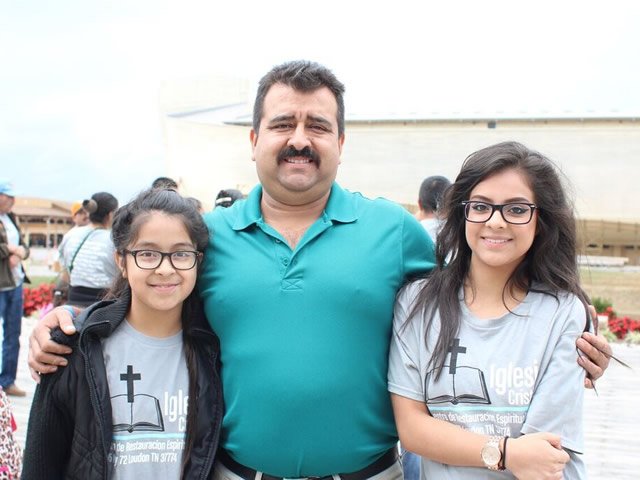 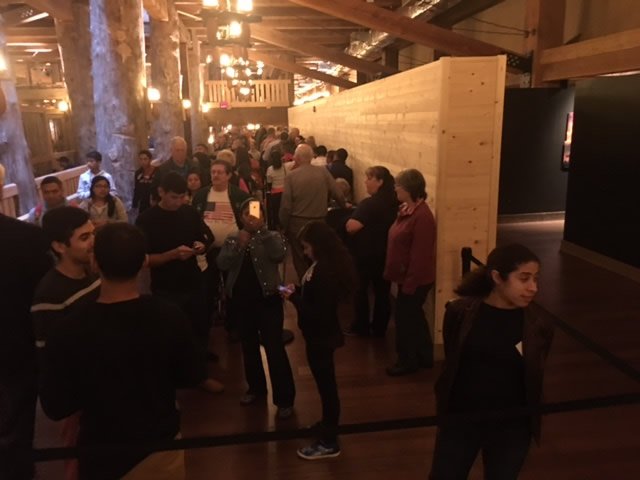 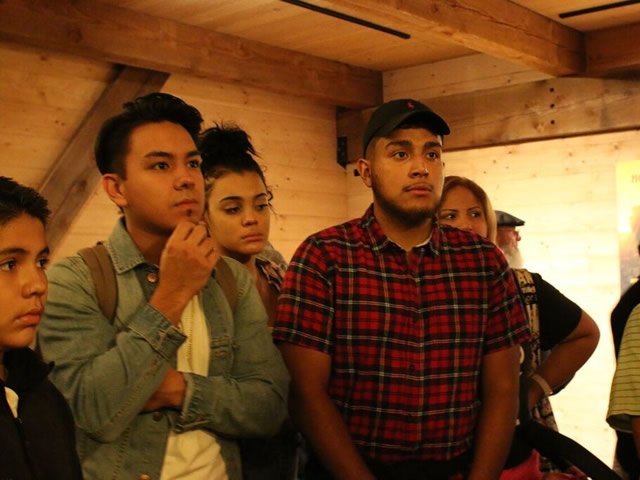 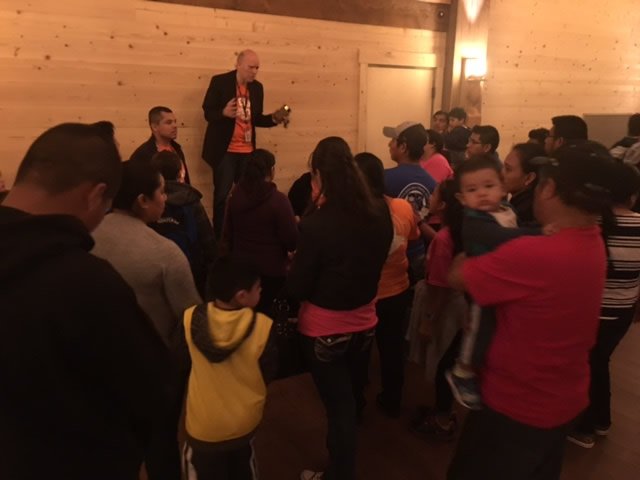 Special Spanish Events at the Ark

The guests loved hearing the explanations of the exhibits in Spanish and having the opportunity to ask questions and get biblical answers! At one end of the Ark, we had a screen and booths for folks to watch The Last Adam film in Spanish (El Postrer Adán); they also heard speakers like Steve Ham (AiG’s international outreach director) explain the Pre-Flood World exhibit, how God was faithful in past judgment, how He will be faithful in future judgment, and how Christ is our only hope for an escape. The guests also enjoyed teaching from specialists and staff such as Tim Chaffey, Dr. David Menton, Dr. Nathaniel Jeanson, Steve Ham, Dr. Andrew Snelling, Dr. Danny Faulkner, Dr. Terry Mortenson, Tony Ramsek, and others! 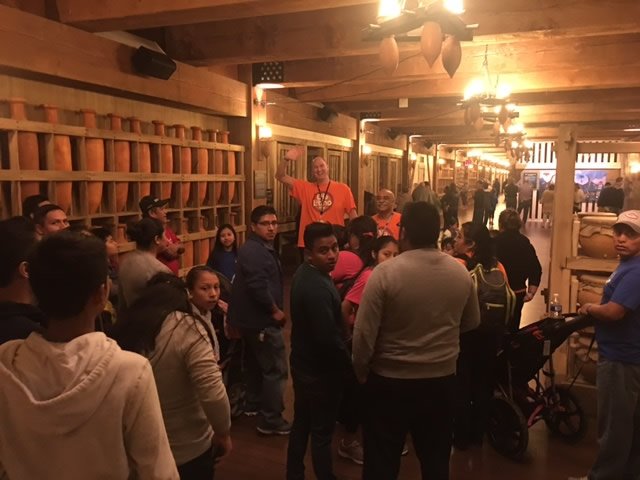 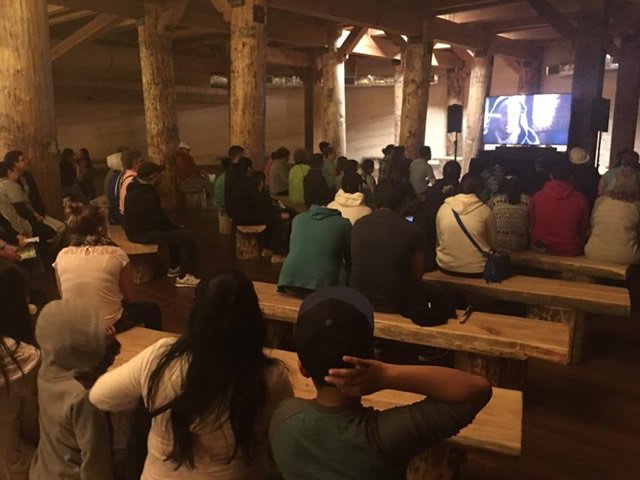 Two Hispanic artists, Humberto Martinez and Oscar Nava, designed and created some of the Ark Encounter exhibits. As an added feature during Día Latino, theses talented men stood at their exhibits and, in Spanish, taught what the exhibits meant and how they designed them. 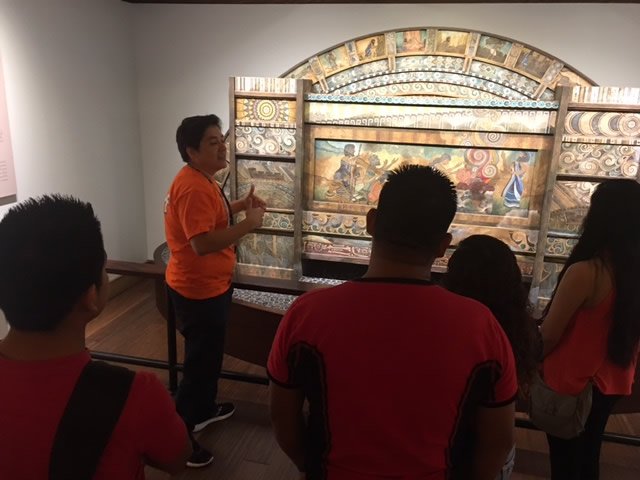 Oscar Nava explains the meaning behind the Rainbow Covenant exhibit that he designed.

Another interesting aspect of this year’s event was the presence of the Bolivian Evangelical University’s band who played for our guests at the museum and the Ark. These musicians, who came all the way from Bolivia, not only blessed our staff and guests with their great talent and skill, but they also received great biblical teaching from Answers in Genesis staff and specialists. 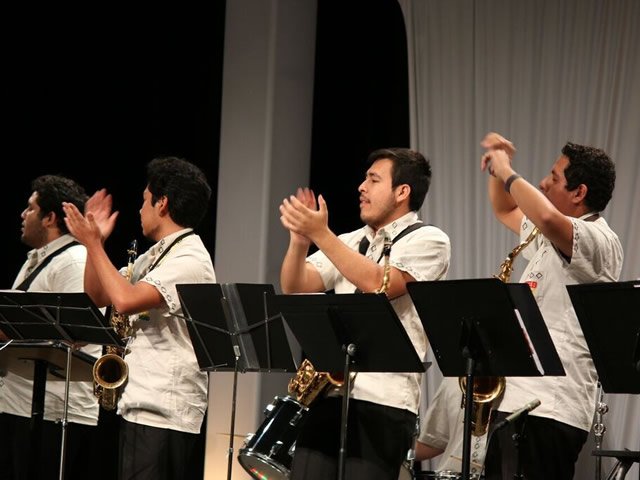 Our guests’ responses can best be summarized as overwhelming awe. One pastor told me that he just couldn’t believe how large the Ark was and how edifying the exhibits were for his own personal faith. The word of the day, when asking for feedback was, “¡asombroso!”— amazing. For many people, the exhibits and teaching helped them understand the historical foundation in the Bible (Genesis 1–11) for the world that we live in, where the gospel itself lies in that history, and where they stand in relation to the gospel.

There were many other people at Answers in Genesis, the Creation Museum, and the Ark Encounter who worked so hard to help this event take off, and we are constantly amazed at how God glorifies Himself through Christ while using such common instruments as ourselves. Due to the constant onslaught of naturalistic indoctrination through our media, public schools, and government, sometimes it’s easy for Christians to forget that because we are in Christ, the Victor, we are already on the winning side. We want others to hear the Good News so they can be brought to the winning side also.

What a blessing to have so many people exposed to the biblical authority message of Christ as Creator and Redeemer, both at the Creation Museum and the Ark Encounter, and to see lives impacted with the gospel! This is just one part of our ministry that is reaching many different cultures and language groups around the world.

You can find out about AiG’s faith-building and evangelistic resources in Spanish.