Is The Virgin Birth Really That Important to the Christian Faith?

According to Rob Bell, founding pastor of Mars Hill Bible Church in Michigan and featured in the short films called NOOMA, the answer is no. Over the past few years, several friends have questioned me about Rob Bell’s theology, and when I saw his books at a Christian college bookstore, I decided to investigate what he believed. His church in Michigan is quite large, he goes on speaking tours, has authored several books, and I have seen his NOOMA DVDs in about every Christian bookstore I visit. While he may be quite popular in Christian circles, what I found concerning his beliefs was, needless to say, shocking. Below are several quotes from his book, Velvet Elvis: Repainting the Christian Faith.

What if tomorrow someone digs up definitive proof that Jesus has a real, earthly, biological father named Larry, and archaeologists find Larry’s tomb and do DNA samples and prove beyond a shadow of a doubt that the virgin birth was really just a bit of mythologizing the Gospel writers threw in to appeal to the followers of Mithra and Dionysian religious cults that were hugely popular at the time of Jesus, whose gods had virgin births? . . .

What if that spring was seriously questioned?

Is the way of Jesus still the best possible way to live?

Or does the whole thing fall apart?

I affirm the historic Christian faith, which includes the virgin birth and the Trinity and the inspiration of the Bible and much more. . . .

But if the whole faith falls apart when we reexamine and rethink one spring, then it wasn’t that strong in the first place, was it? (pp. 026-027) My answers to his questions of “Could you still be a Christian?” and “Or does the whole thing fall apart?” are an emphatic no and yes, respectively. If the virgin birth of Jesus Christ is not true, then Jesus is not God and the Bible is not true. And while Mr. Bell says he “affirms the historic Christian faith,” many of his writings and presentations suggest otherwise. There are some doctrines, like the virgin birth, that are absolutely essential to the Christian faith. It doesn’t make the Christian faith weak, as he suggests, but makes it strong in that it depends on certain absolutes found in Scripture. Christianity is not an “anything goes,” postmodern, relativistic faith. Beginning with the absolute truthfulness of the Bible, the scenario he suggests concerning Jesus’ birth, will never happen! My good friend Todd Friel of Wretched Radio posted a clip concerning Rob Bell’s newest book, Love Wins: A Book About Heaven, Hell, and the Fate of Every Person Who Ever Lived, and I encourage you to watch it.

I don’t really find it all that surprising, albeit sad, that Christians today are questioning the importance of doctrines like the virgin birth and resurrection of Jesus Christ. Many have been taught that God’s Word isn’t true, especially when it comes to Genesis, and it is just a slippery slope to not believing other parts of Scripture as well. In fact, if the doctrines of creation and the Fall aren’t true, then the whole birth, death, and resurrection of Jesus Christ is pointless! 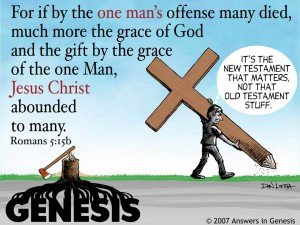 Please be in prayer for Rob Bell and the many people who are being deceived about Christianity by not listening to teachers of sound doctrine (2 Timothy 4:3).