On Friday, April 9, I led the first Answers in Genesis field trip to Red River Gorge. This eight-hour excursion began at the Slade, Kentucky, rest area on the Bert T. Combs Mountain Parkway. The Parkway passes through the Gorge. The Slade exit is one of two exits where one may gain access to Red River Gorge. Most of the 29,000-acre Red River Gorge Geological Area is north of the Parkway, while Natural Bridge State Park is south of the Parkway (and only about two miles from the Slade exit via KY-11). We made four stops in the Red River Gorge Geological Area, and I encouraged our 29 participants to explore Natural Bridge on their own.

The weather could not have been better. It was sunny all day, with a low in the morning of 58 degrees F, but the temperature quickly warmed to a high of 78 degrees. After the first stop, I changed from my jeans to shorts. Everyone on the trip was enthusiastic, and it was a pleasure to share my experience and knowledge of the Gorge with so many people.

The first stop was Chimney Top Rock. This overlook is one of the best in the Gorge, at least among the overlooks that are easy to reach. The North Fork of Red River Gorge is visible nearly 450 feet below. The surrounding cliffs a half-mile or more away show the vertical faces that the cliffs of Red River are famous for. It also was a great setting for a group photo. 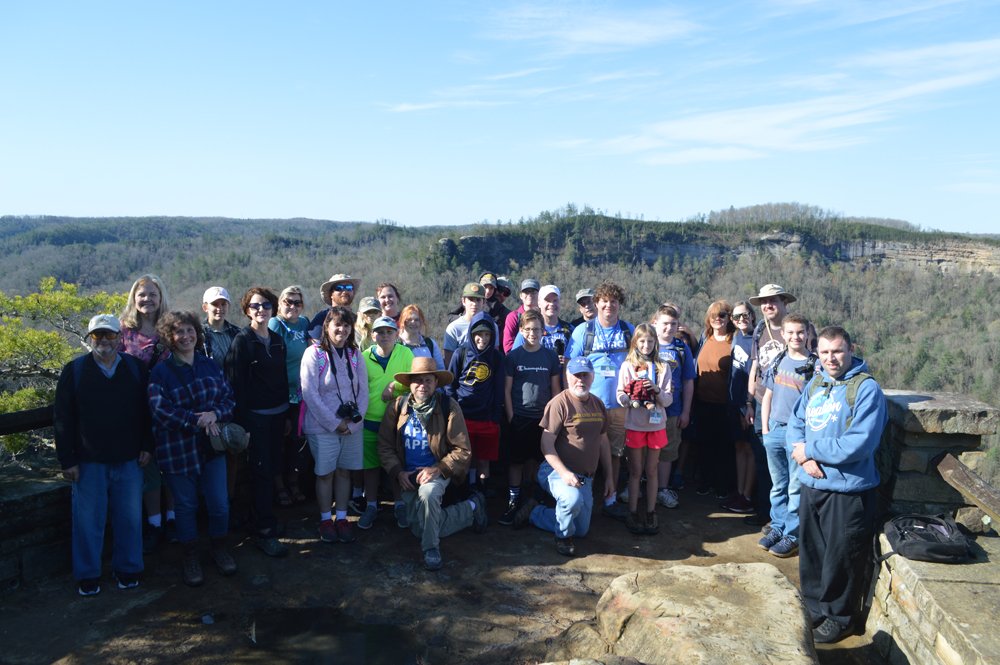 Our first arch of the day was Princess Arch. The trail comes out on the top of the arch, but in order to see the arch itself, you need to climb down from one of many easy routes. This lovely medium-sized arch was a good start. Many of our guests were rightly impressed with Princess Arch, but I had to caution them that we were just getting started – there were better arches to come. There are some large holes in the rock here that some of the children climbed into to get their photos taken. I was delighted that one woman in our group almost immediately found Little Princess Arch, a shelf arch in a small rock shelter nearby. It’s much better when people discover things like this for themselves rather than me pointing them out.

Our next stop was Sky Bridge. This one is a real beauty, so it stands out among arches in Red River.

Our next stop was Sky Bridge. This one is a real beauty, so it stands out among arches in Red River. What makes Sky bridge so special? It’s relatively large, very symmetrical, and it has a second, smaller arch inside, making this a double arch. Some of the interesting geological features of the Corbin sandstone, in which most arches in Red River are found, show up nicely here. I pointed out vertical jointing and piping along the trail to the underside of Sky Bridge.

As wonderful as Sky Bridge is, it doesn’t hold a candle to Rock Bridge, my favorite arch in the Gorge. We spent some time here, including our lunch break. This is where I broke out the Cheerwine. I provided a bottle of this delicious cherry soda for everyone. These glass bottles of Cheerwine are the best because they are sweetened with cane sugar rather than corn syrup. The children had a blast climbing on Rock Bridge and wading in Swift Camp Creek. After I finished eating, I shared more information about Red River, and then I packed up and spent some time wading in Rockbridge Fork, just around the bend from Rock Bridge. The water was cold but standing in the creek is the best place to get photos of Creation Falls, which is just above where Rockbridge Fork joins Swift Camp Creek.

This inaugural field trip was so successful that we likely will have a couple of them per year. Hopefully, we will have another Red River field trip in early autumn. Stay tuned for announcements of future trips.