Last week I blogged about Comet NEOWISE, the brightest comet in several years. In that blog I posted a photo of the comet that I took the morning of July 8. The weather cooperated well enough that I was able to photograph the comet on four of the five mornings afterward. Here is a photo from the morning of July 13. This probably is my best photo of Comet NEOWISE so far. In the photo you can see the bright head of the comet and several degrees of tail. While I could see the head and tail of the comet with the naked eye, the view wasn’t as impressive as in this photo. However, the photo does match well how the comet looked through binoculars. Below is a comparison of two photos showing the motion of Comet NEOWISE over five days. The first photo is from July 8, and the second photo is from July 13. In either photo you can see two bright stars off to the right for comparison. Compared to those stars, the comet has moved noticeably to the left. Notice that the tail has rotated counterclockwise slightly as the comet’s position has changed. Comet tails always point away from the sun, which is below the horizon in the photos. From the changing orientation of the tail, you can get a sense of how much the comet’s position has changed with respect to the sun over just five days. 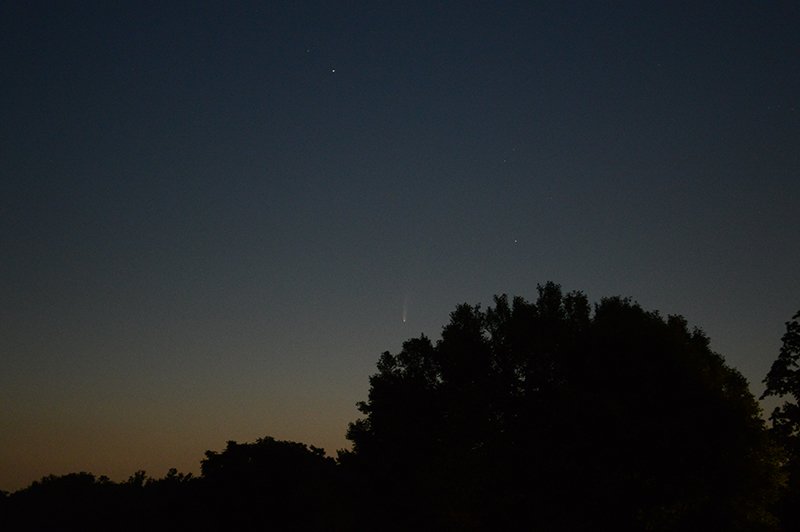 North is to the left, so the comet’s motion is toward the north. It is this rapid northward motion that will cause Comet NEOWISE to transition from the morning to the evening sky. The comet will get increasingly difficult to see in the morning, becoming impossible by early next week. Meantime, Comet NEOWISE will appear low in the north-northwest evening sky by the middle of this week. Therefore, the comet will be visible both evening and morning for a few days. After that, the comet will grow higher in the evening sky the rest of the summer. That normally will make the comet easier to see, but the comet will rapidly fade too. Comet NEOWISE might be visible to the naked eye for a few more weeks. It will continue to be a nice sight through binoculars even longer.

This website has finding charts to help you find Comet NEOWISE morning or evening.

Previous Article A Bright Comet Graces the Morning Sky Next Article Was E.W. Bullinger a Flat-Earther?