On Saturday, February 22, Mike Hughes, aka “Mad” Mike Hughes, died in the crash of his homemade rocket. Videos of the launch show that his parachute opened and detached from the rocket almost instantly, dooming Hughes to a high-velocity impact on the desert floor shortly after that. Hughes famously launched himself nearly 1,900 feet upward in a homemade steam-powered rocket early in 2018. That launch seemed to go flawlessly, as the parachute remained intact and slowed his descent. While that landing was hard, Hughes said that he received no serious injuries. Hughes claimed to have achieved nearly 1,400 feet altitude in a similar craft in 2014, though there are some doubts about that flight.

In 2016, Hughes came out as a flat-earther and stated his motivation was to eventually build a rocket that would take him high enough to prove that the earth is indeed flat. This earned him a speaking spot at the 2018 Flat Earth International Conference (FEIC) in Denver. He was quite the celebrity among that flat-earthers at that meeting. I passed by the display of his rocket several times, hoping to speak to him, but he was always busy talking to other people, so I never got the chance. He announced at that meeting that he was negotiating a deal with a TV network to cover his launch attempts. That network was the Science Channel, and their cameras were at the fatal launch to record part of a series Homemade Astronauts, in which Hughes would star. Given the tragic turn of events, it’s doubtful that this series will go forward.

I’m also concerned that impressionable people might see the attention that Hughes sought in life and is now getting and might be induced to try similar dangerous things.

The reaction of the flat-earth community has been varied. Already I’ve seen some flat-earthers claim that nefarious agents of the government sabotaged and hence assassinated Hughes. Others have claimed that Hughes was whisked away by authorities to learn from him, and so his death was staged as a cover for Hughes’ disappearance. Still, other flat-earthers believe that Hughes never thought the earth is flat but merely used the flat-earth movement to gain fame and financial backing. That belief has circulated among flat-earthers since his appearance at the 2018 FEIC. Indeed, there is evidence that Hughes claimed to be a flat-earther as a publicity stunt. I’m sure that many other flat-earthers will continue to revere Hughes as one of their own as they mourn his death. I’m also concerned that impressionable people might see the attention that Hughes sought in life and is now getting and might be induced to try similar dangerous things. 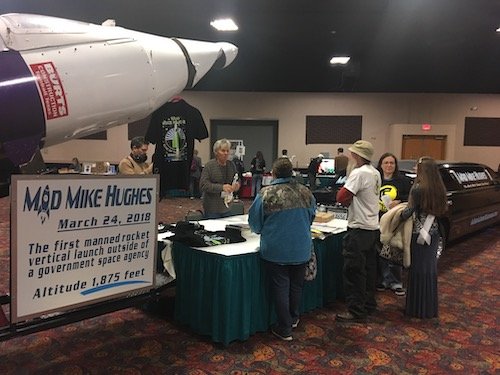 Mike Hughes and his rocket at the 2018 Flat Earth International Conference I attended in Denver.

When I first heard of Hughes two years ago, I thought at the time that if he continued doing this, it would kill him. I also wondered if Hughes was serious about the earth being flat; assuming he was, I thought about the implications of his death when it came. Certainly Hughes was a daredevil who knew the risks of these rocket launches, and regardless of his incentives, tragically paid the ultimate price for his celebrity. But it occurred to me that if Hughes were to die in a launch, those promoting the flat-earth movement would have at least some blood on their hands. When I raised this on a flat-earth discussion group after Hughes’ death, one flat-earther objected strenuously. He said that my suggestion was tantamount to auto manufacturers being responsible for car accidents. That is nonsense. If a manufacturer of cars or any other product knowingly makes things that are defective that ultimately results in severe injury or death, then they are culpable. Even if a company unknowingly manufactures faulty products that result in grave injury or death, they hold some responsibility. Similarly, those who promote the flat-earth movement (primarily on the internet), particularly such stunts, bear some responsibility for Hughes’ death.

This is particularly true of those in the flat-earth movement who aren’t serious about the earth being flat. Why would people promote such a lie? Some undoubtedly do it for pleasure. Some people just get perverse delight out of fooling people into believing something absurd. I think that Samuel Rowbotham, who launched the flat-earth movement in the 19th century, fell into this category. Still, others are motivated by money. It took me two years to figure out how this works. Have you noticed the many advertisements that pop up when you are surfing the internet? The more views that a site has, the more potential customers see the ads. Advertisers pay money to owners of websites that generate enough views to justify the expense. The more outlandish and provocative the content, the more interest, and hence more views. Some prominent flat-earthers don’t appear to have a regular job, so one must wonder how they make money. I’ve heard that some make six figures promoting a flat earth. If those people promoting a flat earth for profit and don’t believe the earth is flat had any decency, I would hope the death of Mike Hughes would cause them to stop.

Previous Article The Scientific Method and the Flat Earth Next Article Betelgeuse Is Coming Back!