The most anticipated astronomical event of 2018 is the apparition of Mars. This summer, Mars will be closest to earth since 2003. Usually, Mars is far from earth and thus appears quite small. But Mars and Earth occasionally line up in their orbits on the same side of the sun, reducing the distance between them, and offering the best opportunity to see Mars. We call this opposition, an event that occurs roughly every 26 months. However, Mars’ orbit is more elliptical than most planetary orbits, so some oppositions are closer to earth than others. Really good oppositions happen at intervals of 15–17 years. So far, I’ve seen three good Mars oppositions, in 1971, 1988, and 2003, so I’m looking forward to my fourth one this year. Mars reaches opposition on July 26, but it’ll be closest to earth on July 30. Mars will be at its best the months of July and August. 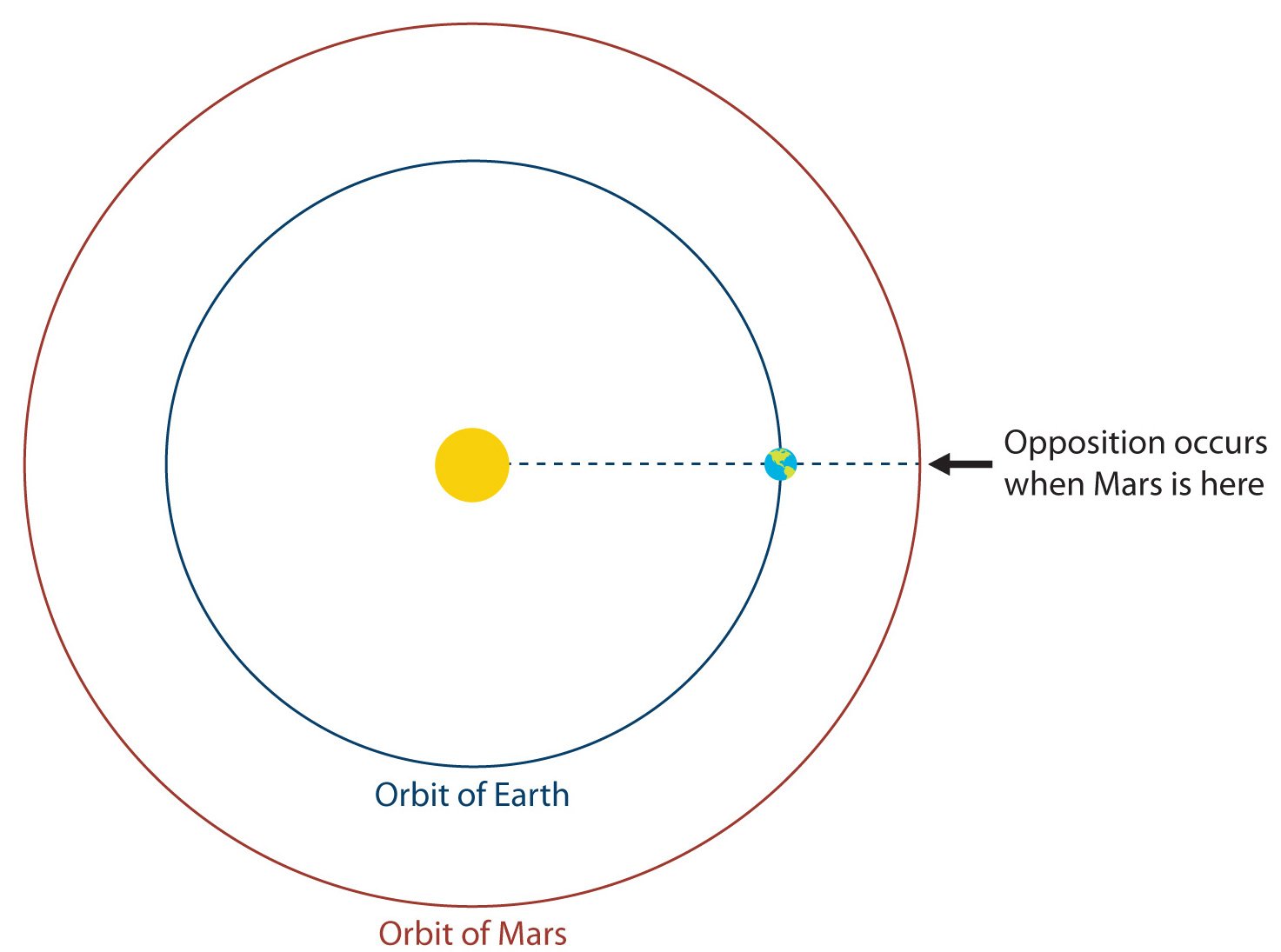 Mars comes closest to earth at opposition, when the earth and Mars line up on the same side of the sun. When Mars is at any other position on its orbit, it is not as close to earth as when at opposition. Mars comes to opposition at intervals of 26 months. 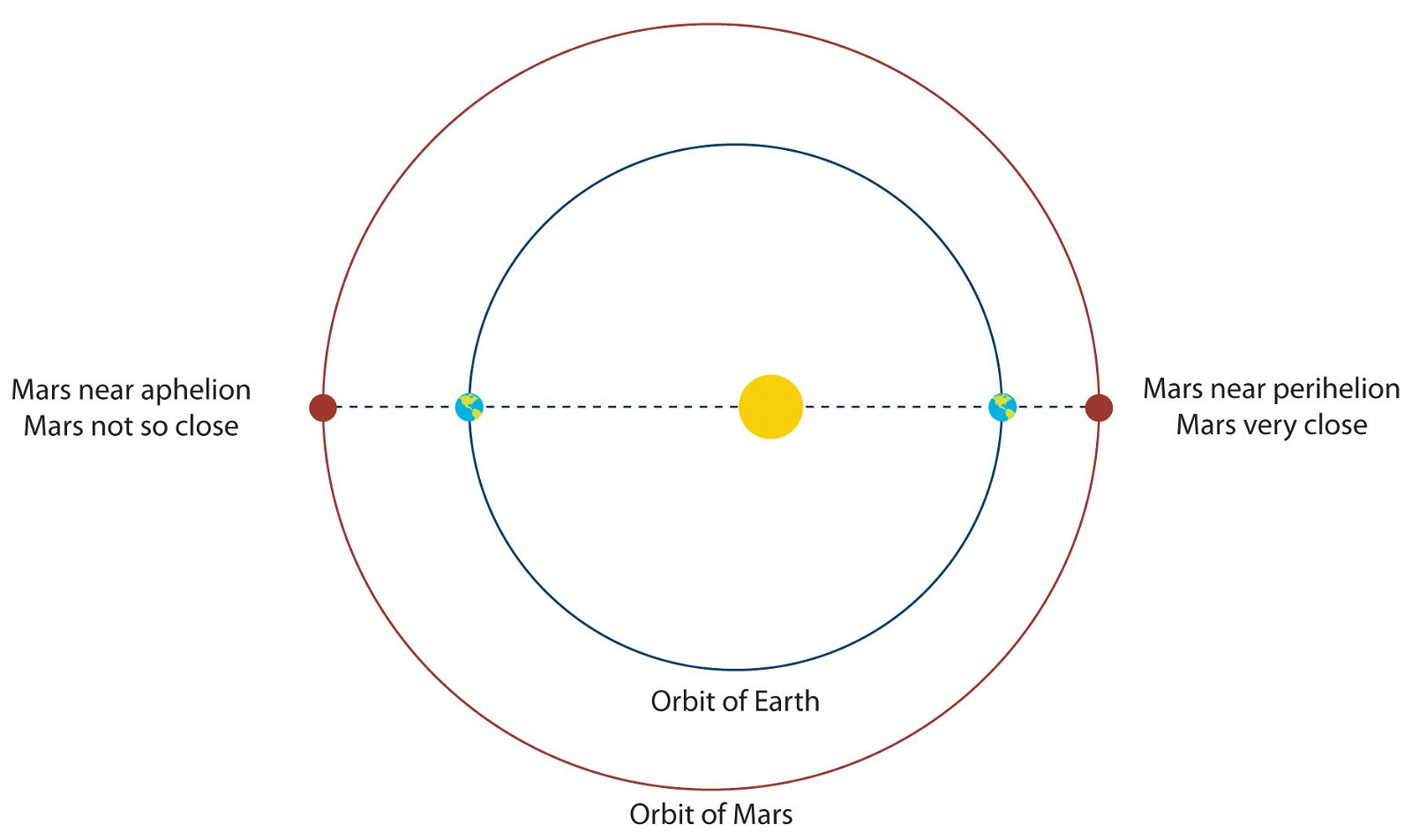 Since Mars’ orbit is so elliptical, not all oppositions are as good as others. Particularly good oppositions occur when Mars also is near perihelion. These more favorable oppositions happen every 15 or 17 years.

What can you expect? Alas, even at its best, Mars can be very disappointing. This is because Mars is a small planet—it’s only half the earth’s size. When closest to us, Mars will be only 24.3 arcseconds across. At 1,800 arcseconds angular diameter, the moon appears 75 times larger. Therefore, to the naked eye, Mars will appear as a very bright star in the southern sky. However, even with a small telescope, you will be able to see the disk of Mars. For comparison, Jupiter generally appears twice as large as Mars will be this summer. Still, you may see some faint details on the Martian surface. Some of the lighter and darker regions on Mars may show up. When looking at Mars with a moderate or large telescope, it resembles a naked-eye view of the full moon. Color filters can help improve the contrast to see these features better. Also, you may notice a polar ice cap as a white tinge near the edge of Mars. One last thing—at opposition, Mars will be up all night, but it will be low in the sky. Turbulence in the earth’s atmosphere tends to blur images. This is accentuated for objects low in the sky, so it will be best to view Mars when it is as high in the sky as possible. This will be around local midnight, but with DST (daylight savings time, or as I prefer to call it, daylight stupid time—perhaps in a future blog I’ll explain why I dislike DST) in effect, this will be after midnight according to our clocks.

What are the other planets doing? Jupiter reaches opposition on May 8, followed by Saturn on June 26. However, while Mars is best in the month or two around opposition, the much larger orbits of Jupiter and Saturn are more forgiving, so Jupiter and Saturn will be good for viewing from spring (early morning) into early autumn (early evening). Even with a small telescope, Jupiter and Saturn are worth a look. Jupiter’s four Galilean satellites (or moons) will be visible, unless one or more of them are passing in front of or behind Jupiter at the time. They will look like stars lined up with Jupiter. If the telescope is large enough, you might see some dark bands in Jupiter’s atmosphere. Saturn’s rings are my favorite thing to look at with a telescope. I never get tired of seeing them. 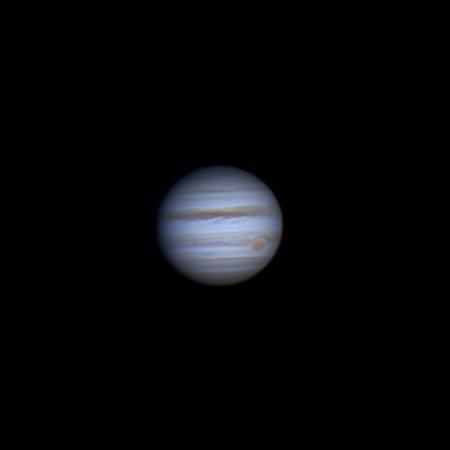 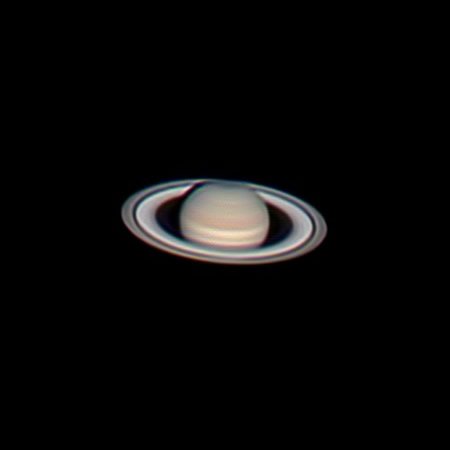 Venus begins the year near superior conjunction (January 8), which means it is on the other side of the sun, so it won’t be visible. Throughout the rest of winter, Venus slowly will creep up into the evening sky, eventually showing up as a bright star low in the west. All this time, it will be far from us, so it will be a disappointing sight through a telescope. However, by early summer, it will begin to get interesting. By then, it will be a gibbous phase, but the amount of Venus that appears lit will shrink while the apparent size of Venus will grow. Venus reaches greatest elongation from the sun on August 17, when it will appear half-lit. After that, Venus will increase in size while becoming an ever-thinner crescent. Around September 20, Venus will be at greatest brightness, after which it will plunge toward the western horizon and disappear from the evening sky over a period of a couple of weeks. After this, Venus will reverse its act in the early morning sky. It will reemerge from the sun’s glare in the eastern sky in early November, reaching greatest brightness in early December. All the while, the apparent size of Venus will shrink, and its thin crescent will swell.

Watching the rapid changes in Venus’ appearance over the summer through a small telescope will be a fascinating study, even a good home school project. It would be best to view it every few days and keep a log of observations, including drawings of Venus. The early-morning show in November–December and continuing into early 2019 would be a good exercise too, though, being early in the morning, and during months of late autumn and early winter, it won’t be as easy. These changing phases of Venus, from nearly full to a very thin crescent and back, are proof that Venus orbits the sun. This was crucial evidence that Galileo Galilei used four centuries ago to disprove the Ptolemaic model, the dominant cosmology at that time. Hence, this is a good opportunity to see direct evidence of the heliocentric model for yourself.

There will be two total lunar eclipses in 2018. The moon will be totally eclipsed on the morning of January 31 in western North America and the evening of January 31 in Australia and eastern Asia. I may be able to see the partial phases at the beginning of this eclipse here in northern Kentucky. The second total lunar eclipse will be visible from Europe, Africa, and Asia, on the evening of July 27, and in the morning of July 28 in the Far East. Since, at best, I’ll see just the beginning of one of these five eclipses in 2018, I almost didn’t mention them. But then I must realize, not everyone reading this lives near me.

Finally, this ought to be a good year for the Perseid meteor shower. The Perseid shower is one of the most dependable showers (with a peak rate of 60 or more per hour). With this dependability, combined with comfortable summer temperatures in early mid-August (at least in the Northern Hemisphere), the Perseid shower is very popular. The shower lasts two weeks, with peak activity on the morning of August 13, but the activity will be high a few nights either way. In some years, the bright moon interferes, but not this year, as the moon is new just two days before the peak.

To watch the Perseids, try to get to a dark sky, because city lights will make all but the brightest meteors difficult to see. Also, the greatest number of meteors will be visible between 1:00 a.m. and dawn. The number of meteors visible early in the evening can be disappointing. Though the meteors radiate from a spot in the constellation Perseus (hence the name of the shower), they can be seen in any part of the sky. I will watch this year’s shower on the “Geology by Day, Astronomy by Night” raft trip through Grand Canyon with Canyon Ministries. I would invite you to join me, but, alas, the trip is filled (maybe next year). I got into astrophotography 2 ½ years ago, and I managed to photograph one Perseid from my deck in 2016 (I didn’t try in 2017, because the moon was bright). I’ll have my camera and tripod along on the raft trip, so I hope to capture many more Perseids this year.

Stay tuned to my blog, as I’ll probably share any interesting astrophotos I take this year, as well as update any unexpected events. Keep looking up!