Something New on (Not Under) the Sun

During busy times at the Creation Museum (such as during summer), we offer our Sun Spotting program. We use a white light filter on a telescope to view sunspots. In addition, we use an H-alpha filter on another telescope to view solar prominences. Prominences are loops that appear off the limb (edge) of the sun. When many guests see prominences, they mistakenly think they are looking at flares. This is understandable. Most people have seen images of flares taken from spacecraft, and the structure of flares sometimes resembles prominences. However, flares produce very little energy in the part of the electromagnetic spectrum that we can see. The images of flares are taken in parts of the spectrum, such as the ultraviolet, that we can’t see. The people producing these images must select a color for the images, and that color usually is red. That’s unfortunate, because prominences are red, so the confusion continues.

While sunspots are relatively easy to see, prominences often aren’t. Prominences usually have low contrast, making them difficult to see. Furthermore, if no large prominences are located on the sun’s limb, then there isn’t much to see. The H-alpha filter has is a very narrow bandpass, letting in only a very narrow range of red light wavelengths. Because prominences are moving, their motion produces a Doppler shift that moves part or even all of some prominences out of the filter’s bandpass. I can tune the filter to improve this, but heat generated by exposure to the sun tunes the filter too. This can be difficult to keep up with on a day when there are small clouds that intermittingly move across the sun’s disk, alternately heating and cooling the filter.

Labor Day was one of those rare occurrences when sunspots were more impressive than the prominences.

This was the situation on Monday, September 4, 2017 (Labor Day). I searched for prominences before I finally found a very modest faint one that appeared detached from the sun (the rest of the prominence connecting it to the sun was not visible). Only half the people in the Sun Spotting workshop could see it. Normally, prominences are the showstopper, being much more impressive than the sunspots. However, this was reversed on Labor Day. I set up about 11:00 a.m. for the 1:30 p.m. Sun Spotting program. Normally, I set up the telescope with the white-light filter first, but this time I set up the telescope with the H-alpha filter first. While sunspots are visible in H-alpha, they look much better in white light. However, I immediately saw two huge sunspot groups. I quickly set up the other telescope to get a better look in white light. I hadn’t seen such good sunspots in several years. Later in the day, about 4:00 p.m., I took this photo. So Labor Day was one of those rare occurrences when sunspots were more impressive than the prominences. 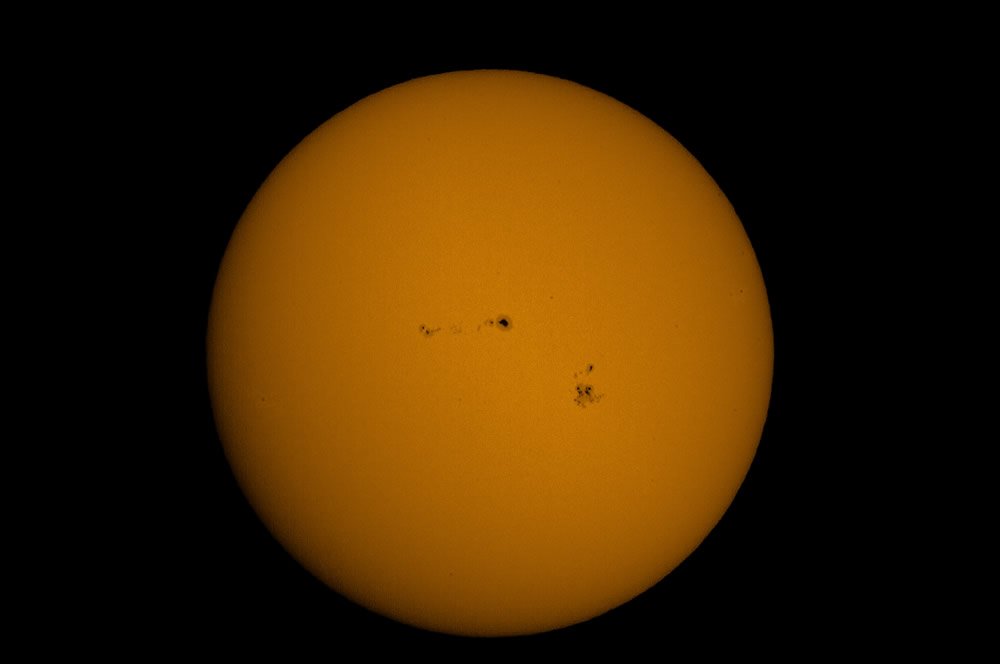 The spot group on the right is AR 2673, while the one on the left is AR 2674. The AR stands for active region. Since 1972, solar astronomers have been sequentially numbering this way any region on the sun with sunspot activity.

This has been a weird sunspot cycle (Solar Cycle 24). Sunspot minimum since the last solar cycle (Solar Cycle 23) was unusually long. As Solar Cycle 24 began, it looked lackluster, with the early activity being the least in a century. This implied that Solar Cycle 24 would have much less spot activity than in recent decades. Sunspot maximum appeared to be in 2012, but as sunspot numbers dwindled, a second peak occurred in early 2014. While not unprecedented, double peaks are not common. The peak was the least in decades, and we are two and a half years past the second peak, with sunspot minimum expected in 2019–2020. Being so close to sunspot minimum, large and numerous spots ought to be unusual by now. As I recently mentioned, some nice spots appeared on the sun a week before the solar eclipse last month, offering a great opportunity to photograph the spots on the partially eclipsed sun. However, as those spots rotated off the sun’s disk, new ones took their place, including the ones photographed above. Therefore, we’ve had three weeks of unusually intense activity on the sun. What does this mean? We don’t know yet. This activity is unusual, but again is not unprecedented.

My only concern for this is the current extremely high level of excitement over supposed prophetic events to be fulfilled on September 23, 2017. On that date, many people expect Revelation 12:1–2 will be fulfilled literally. Many people have tied the total solar eclipse of August 21, 2017, to this event, arguing that the eclipse amounted to fulfillment of the prophecy of the sun being turned dark. Furthermore, some people have said similar things about the tetrad of four lunar eclipses in 2014–2015 being a fulfillment of the moon appearing as blood. If the people who support all this fast and loose prophetic prediction hear about this unusual activity on the sun, they likely will claim it is some great sign in the heavens. At the risk of repeating myself, the sort of activity that we recently have seen on the sun, while unusual, has happened before. As with solar and lunar eclipses, it sets the bar very low for this recent solar activity to be an apocalyptic sign. If such activity were to increase tremendously, then it might amount to a sign. I’ll keep an eye on things and let you know if they change. In the meantime, don’t fret over what day the Lord might return, but instead, following Jesus’ command to always be ready.