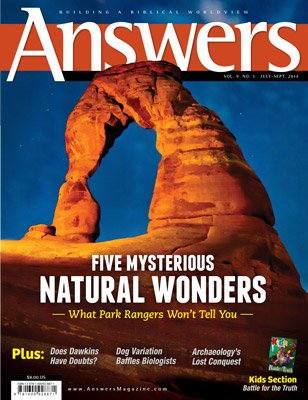 On June 18, our five-year-old daughter was diagnosed with amblyopia. The following day we received our new Answers magazine. We were surprised and encouraged to read the article about God’s amazing design for human vision written by an author with amblyopia! God has used Answers to comfort and encourage us personally. All the time, God is good!

Editor’s Response: Simply put, the Bible is unclear whether insects are nephesh life. People and some animals are described in Genesis as having, or being, nephesh. The Hebrew word nephesh conveys the basic idea of a “breathing creature,” but some passages indicate that nephesh creatures may only be the ones that have blood. For example, Leviticus 17:11 states that “the life [nephesh] of all flesh is the blood of it.” There is no example in Scripture of “blood” ever being used in reference to invertebrates. In fact, in the biblical and everyday sense, invertebrates do not have blood [Hebrew, dam].

Was Cain the Firstborn?

I just read “How Long Was Adam in the Garden?” Nowhere in the Bible does it say that Cain was the firstborn. Please tell me where I am wrong.

Editor’s Response: While the Bible does not specifically say that Cain was Adam and Eve’s first son, the sequence of the Hebrew text and Eve’s comment about his birth very strongly imply that he was the first.

But the most important reason we know Eve couldn’t have had children, or even have conceived a child, before the Fall is that any such child would be born without sin. In fact, God tells us that in Adam all sinned—we all inherited original sin from him.

I think you may have missed one possibility in explaining the relationship between dogs and wolves [“Suite Dogs”]—that is that there may be no relationship at all from an ancestry perspective.

Although it is certainly possible that man domesticated animals from the wild, it is also possible that God provided Adam and Eve with a unique companion in a dog.

Editor’s Response: Most creationists, including those at Answers in Genesis, have defined “kinds” as animals that can interbreed. Since dogs can interbreed with wolves, and since Noah took two of each unclean kind on the Ark, most creationists would lump the dogs and wolves together in the dog kind.