As the Ark Encounter celebrates its fifth anniversary today, the internationally popular life-size Noah’s Ark in N. Kentucky is seeing record crowds, with attendance returning to pre-pandemic levels and beyond, and is announcing future expansion plans—which include a Tower of Babel attraction that will tackle racism issues, showing how all people groups have developed from one biological race.

Ken Ham, founder and CEO of Answers in Genesis, owner and operator of the Ark Encounter and its sister attraction, the Creation Museum, noted: “Compared to other national attractions right now, we are blessed. We don’t know of any that are seeing numbers equivalent to or better than their 2019 attendance. Ark attendance will only increase as more international visitors resume traveling and as bus tours return to levels we’ve experienced before, such as up to 50 tour buses in a day. I believe this summer will be our best season ever, particularly with our 40 days and nights of gospel music, August 2–September 10.”

On recent Saturdays, the Ark has drawn over 7,000 daily guests. As a result of excellent 2021 attendance, area hotels, restaurants, and other tourism-related businesses are booming. “An incredible number of visitors are coming to the Ark and Creation Museum and hotel occupancy in the region reflects that,” said Julie Kirkpatrick, president/CEO of the tourism group meetNKY. “Florence hotels ran close to 77% occupancy in May; the national average was 59.3% as reference.”

Last week, the Ark Encounter, which features a 510-foot-long Ark as its centerpiece, was named Kentucky’s “most popular attraction” by Attractions Magazine, based on the number of Google reviews. In five years, the Ark Encounter and the high-tech Creation Museum in Petersburg have made N. Kentucky the leading faith-based destination in America. With much more still to come on the 800-acre Ark site, attendance and economic impact will continue to grow. 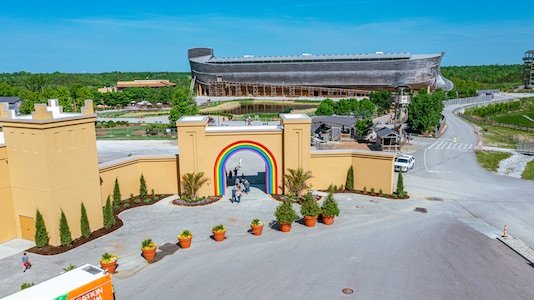 On many Saturdays, the Ark Encounter, which now features a rainbow arch entrance (based on Genesis 9:13), has been welcoming over 7,000 guests a day.

As the pandemic slows, the Ark Encounter and Creation Museum are seeing many more people willing to travel. Attendance at the Ark and museum is equal to their excellent 2019 numbers, and on many recent days, record attendance is being set at both facilities. The numbers are even more impressive when noting that very few motor coaches have been arriving—people are only now beginning to feel more comfortable traveling by bus and sitting among other passengers.

What’s New and to Come

In addition to the Tower of Babel attraction, Ark Encounter expansion plans include a massive indoor scale model of what Jerusalem may have looked like at the time of Christ (open likely in 2023), and a themed carousel to be enjoyed by families and children. The Ark Encounter will begin raising funds for the Tower of Babel this year, which likely will take three or more years to research, plan, and construct. Among other things, the huge Babel structure will help people understand how genetics research and the Bible confirm the origin of all people groups around the world (and all people belonging to one biological race) and will tackle the racism issue.

A new exhibit opens at the Creation Museum this week, Borderland: Israel at the Time of Jesus. The stunning exhibit features artifacts, models, original artwork, and replicas of what life was like in Israel in the time of Jesus.

Despite the pandemic, the Ark managed last year to open a $3 million high-tech Virtual Reality experience, Truth Traveler, funded by a supporter. Guests are outfitted with VR headsets as they sit in seats that move and vibrate and travel back to Noah’s time. It’s like a ride, only it’s done virtually. Also, many new animals have been added to the Ark’s Ararat Ridge Zoo, including lemurs and sloths. In addition, seating has been increased at Emzara’s Restaurant, in the shadow of the Ark—on a busy day it can accommodate up to 1,700 diners at one time, making the themed restaurant one of the largest in all of N. America. Lastly, the lower level of the massive Answers Center (the top level seats 2,500 people) is finished, including a fully equipped science laboratory in this multi-purpose center that is already in use for daily programs for Ark guests and select conferences.

Since the opening of the Ark Encounter, many challenges have been overcome. By far, the biggest was the government-mandated COVID-19 closure of the Ark last year that lasted almost three months. But a very strong 2021 is seeing the Ark not only returning to its 2019 position but is witnessing record crowds on many days.

Another challenge since opening in 2016 has been countering myths about the Ark Encounter, like the rumor that state money was used to build and open the Ark Encounter. Also, it has had to counter the myth that the city of Williamstown is at risk on $62 million in Ark bonds. The bonds are “private activity bonds” and are not a debt of the issuer (Williamstown) but only the borrower (the Ark Encounter). AiG supporters funded the bond offering, and all bond payments have been paid on schedule.

Today, the Ark’s biggest challenge is hiring the hundreds of seasonal staff needed for the busy summer season that is already here. Also, construction costs, especially for wood and steel, have skyrocketed this year. Projects planned at the Ark Encounter have now become much more expensive to build.

Economic Benefits of the Ark Encounter

For its first four years, the Ark paid state sales taxes that are collected within the attraction totaling $10,211,017. Of this amount, the Ark has received $7,181,739 back in a tourism incentive/rebate program. So the state gained from this incentive, netting $3,029,278 more than was paid for the rebate. Of course, taxes collected by the Ark only constitute a small part of all taxes paid by Ark visitors in the region: they pay various taxes when they stay in hotels, eat in restaurants, fill up their cars, etc.

Over the years, directly and indirectly, the Ark has added many tens of millions of dollars into the state and local treasuries, plus has seen the construction of new hotels to meet guest demand, especially new lodgings in the city of Dry Ridge, just north of the Ark—yet recognizing that many more hotels still need to be built, for on some nights, no hotel rooms are available within an hour’s drive of the Ark. Also, the creation of the Ark Encounter has added thousands of jobs in tourism-related businesses, and these workers are taxpayers also. The Ark has been a massive net gain for Kentucky and Grant County, illustrating the wisdom of state legislators who created the sales tax rebate incentive.

Also, locally, the Ark has paid $2.72 million in property taxes to Grant County, as well as $902,000 in property taxes to the city of Williamstown. In addition, Williamstown has received approximately $1.6 million in safety fee assessments from the Ark for the past four years. Furthermore, the Ark, Creation Museum, and the Answers in Genesis organization that owns the two attractions employ about 700 full-time (salaried and hourly) staff, and up to 600 seasonal staff at various times. AiG and its attractions are significant employers in Northern Kentucky.

Bimal Patel, President of Rolling Hills Hospitality which represents ten properties in the region, expresses his appreciation for the visitors the attractions have brought to the area: “Thank you for being great partners and driving immense amounts of tourism to Northern Kentucky,” he said. “The state owes your organization big time for changing travel in our state.”

Research has shown that over 92% of Ark and museum guests come from outside Kentucky. Ham observed too that “we are discovering that many of our guests decide to stay for a few days in the area, not only to spend more time at our ever-growing attractions but to visit other places. Northern Kentucky has experienced a significant financial impact from our Ark guests.”

Answers in Genesis is a multi-faceted apologetics (i.e., Bible-affirming) ministry based in Northern Kentucky. AiG launched an on-demand video-streaming platform last year, Answers TV, with over 3,000 videos and growing daily. In addition to operating the Ark Encounter, AiG runs the Creation Museum, which has also become a major family attraction, with over 500,000 annual guests. This year, all children 10 and under continue to be free at both attractions when they come with a paying adult.