Pro-Life Exhibit to Open at the Creation Museum

Answer to “When Does Human Life Begin?” Presented in Stunning New Exhibit

Using the latest scientific discoveries along with teachings from the Bible, a team of artists, technicians, and scientists at the Creation Museum has created a $1.2 million visually striking exhibit, Fearfully and Wonderfully Made. With life-like models depicting a baby’s remarkable development in the womb and other displays, along with 4D ultrasound videos, this tastefully done exhibit opens to the public on September 25, 2020, and is offered at no extra admission charge. The exhibit was entirely funded by donations.

The name of the exhibit, Fearfully and Wonderfully Made, comes from a phrase in Psalm 139:14: “I praise you, for I am fearfully and wonderfully made. Wonderful are your works; my soul knows it very well.”

Ken Ham, CEO and founder of Answers in Genesis and its Creation Museum, declared: “This new exhibit is spectacular and very powerful in its presentations. Our talented artists and A/V staff, working from the research of our PhD faculty, have created a tastefully done exhibit that includes exquisite models, starting with the baby as a fertilized egg. Guests then see models showing the development of the child over nine months.” 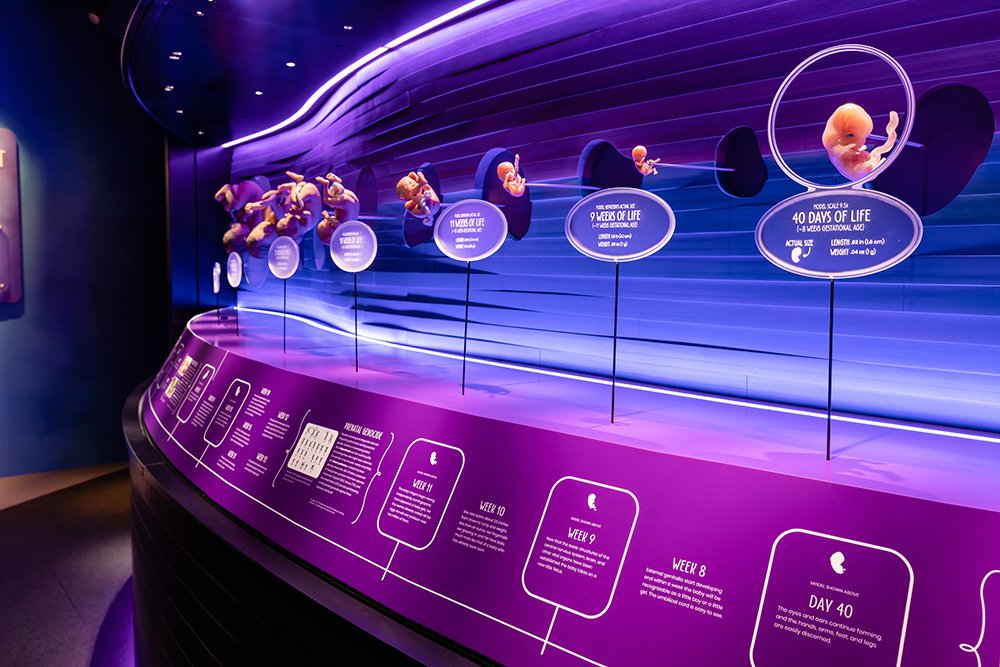 Ham added: “Medically, there can be no doubt: life begins at fertilization. As the exhibit states, ‘when the chromosomes from the sperm and the egg combine . . . a genetically unique individual is formed.’ And biblically, we know from Genesis chapter 1 and other passages that we are all made in the image of God and thus have value.”

With the models on display, guests can see how the organs develop inside a baby’s body. Visitors will also watch stunning 4D ultrasound footage of babies growing in the womb. The associated signage presents the biblical and scientific evidence that life begins at fertilization. 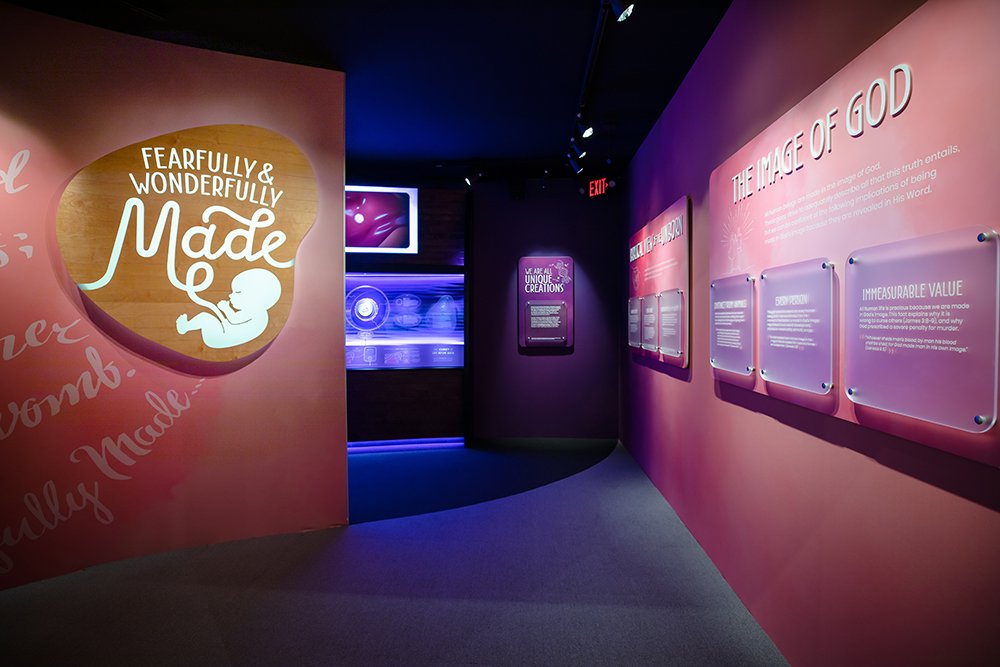 The research and text for the exhibit was overseen by AiG’s anatomist, Dr. David Menton (PhD, Brown University), who served as an award-winning professor at Washington University School of Medicine in St. Louis for 34 years. Dr. Menton is honored with a large plaque at the exhibit to recognize his decades of groundbreaking research into human anatomy and how medical science confirms biblical truths.

Fearfully and Wonderfully Made will respectfully engage visitors with the case that human life begins at fertilization.

Fearfully and Wonderfully Made will respectfully engage visitors with the case that human life begins at fertilization. The topics will also be addressed with a message of hope for people who may have lost a child through miscarriage or an elective abortion. For these families, the exhibit will present God’s love as the only real hope in coping. Ken Ham noted: “It presents the sanctity of human life inside the womb, shares messages of hope, and presents the adoption option. There is no other exhibit in the world like this one. Fearfully and Wonderfully Made opens at an important time in the culture as Supreme Court justices and various legislators tackle the question of when human life begins.”

Free literature will be available at the exhibit for guests to take with them so they can further consider and share what they have seen at the museum.

In June, the Creation Museum added a $1.2 million planetarium. It is a part of a massive upgrade of the first third of the museum’s 75,000-square-foot space, entirely funded by donations. The new Fearfully and Wonderfully Made exhibit is located towards the end of the museum experience.

Ham also announced today that the popular “Kids Free” program will return to the Creation Museum and its sister attraction, the Ark Encounter, in 2021. Children 10 and under accompanied by a paying adult can visit through the end of next year at no charge. Ham noted that because the museum and Ark were closed for almost three months during COVID-19, “we were aware that many families with young children were hoping to visit us in the Spring, but we were not able to welcome them due to the closures. We wanted to make it up to them for the rest of 2020 and through 2021.”

The Creation Museum and the Ark Encounter are following the procedures summarized on the website and in a detailed, robust 45-page “COVID-19 Preparedness Plan.” The attractions continue to conduct temperature tests of staff, regularly clean and sanitize its facilities, outfit its employees with masks, and engage in other safety practices.

”Since we reopened our attractions in June, I have been greatly encouraged to see so many families, including lots of children, visiting us once again,” stated Ham. He added: “We have also been pleasantly surprised by the strong attendance, as have our local hotels, B&Bs, and restaurants.”

Answers in Genesis is an apologetics (i.e., Bible-defending) ministry based in Petersburg, Kentucky (with the Creation Museum next door). The ministry employs 950 full-time and seasonal/part-time staff. The Ark Encounter in Williamstown, Kentucky, opened in 2016 and features a 510-foot-long Noah’s Ark, Ararat Ridge Zoo, and a high-tech VR Experience that just opened. The Ark Encounter recently announced that next year it will host the world’s largest Christian music festival, “40 Days and 40 Nights of Gospel Music at the Ark.” About 200,000 people are expected to attend and hear 90 artists and a dozen popular speakers, August 2 – September 10, 2021.

For more information on the two attractions, the new pro-life exhibit, and the music festival, visit CreationMuseum.org and ArkEncounter.com.