[Editor’s note: This article was adapted from a news release that was recently distributed to the media.]
A high-tech $3 million virtual reality experience called the “Truth Traveler” has just opened at the Ark Encounter, featuring its first VR show, A Flood of Reality. Guests are outfitted with state-of-the-art VR headsets containing studio-quality headphones and, as they sit in special-effects motion seats that move, vibrate, and interact with the guests to enhance their experience, they travel back to the time of Noah and the ark.

Guests will be ushered back almost 4,500 years in history to see Noah and his crew building the ark, watch the animals entering the massive ship, experience the flood’s dramatic beginning, ride in the ark as it floats on the flood waters, and see the ship perched at rest on the mountains of Ararat.

Ken Ham, CEO and founder of Answers in Genesis, the organization behind the Ark Encounter, said, “I’m excited about this fantastic high-tech VR addition. As people have come to expect at the Ark Encounter, the bar of excellence is set extremely high, as it is again with this experience.”

Ham, who appears as a hologram at the beginning and end of the program, added: “This 4K VR experience is like no other. While its quality of production and immersive feel are what you would expect from Walt Disney World or Universal Studios, the message is different. A Flood of Reality presents Noah’s ark and the flood as factual history and reinforces the truth of the Bible.”

Inside the VR building, 12 separate bays hold 4 seats each. These custom-made MX4D Motion EFX Experience seats (manufactured in California) further enhance the guests’ immersion into the experience during their journey back in time. The seats add wind blasts, scents, and full motion, giving the sensation of flying.

The top-of-the-line commercial-grade virtual reality headsets help put guests into a highly immersive experience, with state-of-the-art headphones that produce engaging sounds and audio narration from a lively animated guide, “P.O.D.” P.O.D is a robot who presents a fun, guided tour of the time travel. Meanwhile, as the seats move, they poke and blast guests with air and scents as the seats coordinate with what is seen through the VR headset. The VR experience requires a timed-ticket that is purchased onsite for an additional charge above the regular Ark admission fee. 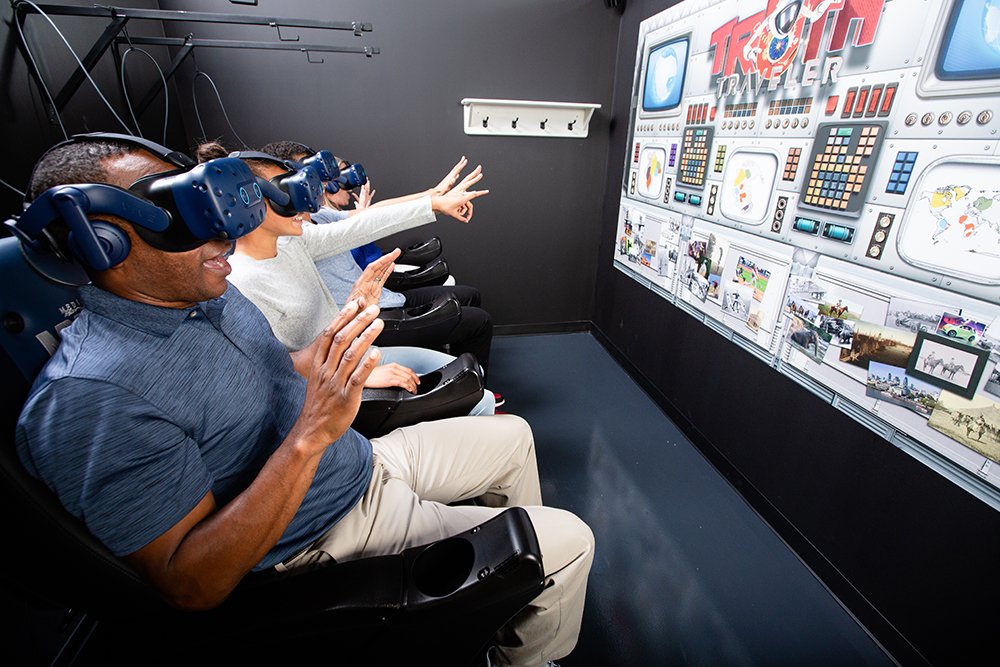 In creating the VR experience, the Ark Encounter worked with the owner of Virtual Truth Experiences, who is an AiG supporter and someone passionate about utilizing VR’s potential to share biblical truth. Two leading VR experience companies were engaged to develop the 10-minute highly interactive program: MediaMation, which made the special motion EFX seats, and GrooveJones, which created the program’s stunning animation and technology structure for the experience (based on a script provided by Ark Encounter staff).

The Ark’s sister attraction, the Creation Museum in Petersburg, continues to add exhibits, as well as a $1.2 million planetarium using laser projection that opened in June. The first third of the upgrades to the museum’s 75,000-square-foot space opened late last year, entirely funded by donations.

The Ark Encounter and Creation Museum are following the procedures summarized on the website and in a detailed, robust 45-page “COVID-19 Preparedness Plan.” The attractions continue to conduct temperature tests of staff, regularly clean and sanitize its facilities, outfit its employees with masks and engage in other safety practices.

”Since we reopened our attractions on June 8, I have been greatly encouraged to see so many families, including children, visiting us once again,” Ken Ham said. “Having been shut down for nearly three months, and with all that’s happened across the nation, we weren’t sure what to expect for the first several weeks. But we have been pleasantly surprised by the strong attendance, as have local hotels, B&Bs, and restaurants. Our attractions continue to have a significant economic impact on the region, as recognized last week by receiving the Community Award from the Northern Kentucky Chamber of Commerce.”

Ham added: “Many local hotels have informed us they have very strong bookings for the rest of the summer. With our national TV ads and social media letting people know we have reopened, we expect these excellent attendance numbers to rise over time. However, like other attractions, we don’t expect attendance to be back to normal levels until the Spring of next year.”

To help spread out the crowds and avoid long lines, the Ark and Creation Museum have created an incentive: for a limited time, guests who arrive after 1 p.m. with a ticket that they have purchased online (not at the gate) will enjoy a free lunch or dinner that day.

Answers in Genesis is an apologetics (i.e., Bible-defending) ministry based in northern Kentucky, near Cincinnati, and employs 850 full-time and seasonal/part-time staff. The Ark Encounter opened in 2016 and features a 510-foot-long Noah’s ark. The Ark Encounter recently announced it will be hosting the world’s largest Christian music festival next year, “40 Days and 40 Nights of Gospel Music at the Ark.” About 200,000 people are expected and will hear 80 artists and 10 popular speakers, August 2–September 10, 2021.