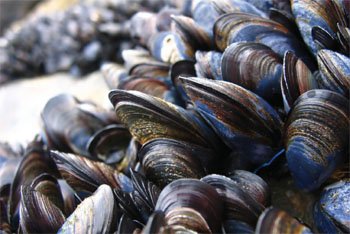 Common mussels live in large colonies and release their gametes (eggs and sperm) synchronously (at the same time) in the water column for maximum fertilization. The mussel was also created with the ability to make extremely tough fibers, called byssus threads, that it uses to attach itself to other things. These threads resemble soft rubber at one end and rigid nylon at the other and are 5 times tougher than a human tendon.

Size: 2–5 in (5–13 cm)
Diet: Organic matter and phytoplankton
Habitat: Coasts and estuaries of north and southeastern Atlantic Ocean, and the northeastern and southwestern Pacific Ocean