My Trip to Brazil

Hey kids, welcome back to our series on the mysteries of created kinds.

This week, we are taking a detour from examining the ark kinds and delving into some fish. I just returned from a very profitable expedition to Brazil, and I want to share some of my exciting finds with you!

First, a little about Brazil. It is the largest country in South America, and the locals speak Portuguese. It is a mix of big cities, small towns, and open countryside covered in brush. Most famous for the Amazon River, Brazil houses thousands of unique species, many of which are very colorful and highly under-studied.

I was not in the Amazon rainforest. Instead, I was in a small town on the Acaraú River. While I was there, some people from the church I attended in town took me fishing. They were fishing to eat, but I was there for science. Every species they caught, they were gracious enough to allow me to photograph. You can see some of the photographs below. I was able to identify three of the species and have a good guess at the genus for the others. If someone recognizes the ones I’ve been unable to identify, feel free to reach out and let me know! Without further ado, let’s meet the species I identified. 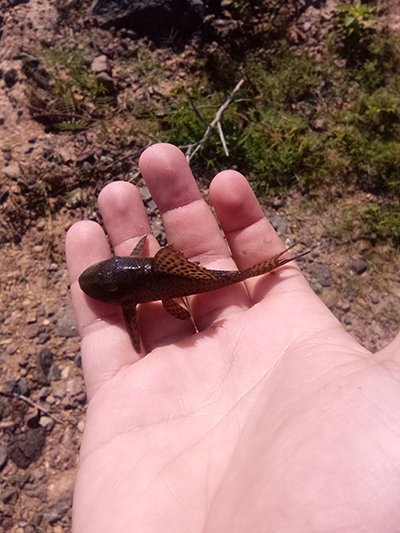 For fishkeepers, this one is a find! This pleco gets its name from its very conspicuous spotted pattern that you can see in the photo. The fish has distinctly lengthened lobes on its tail as well. The fishermen tell me it can reach up to a foot in length, though I could not verify this. All the ones I saw were small, a mere three to four inches long. They were found in darker, rapidly flowing water with large rocks and a sharp gravel substrate. The diet of the species is unknown, but there was significant algal growth in the river where they were found, so I suspect algae is part of their diet. If my identification is correct, this is the first report (that I can find) of this species from the Acaraú River. This species is now on my “must have” list for aquarium care. 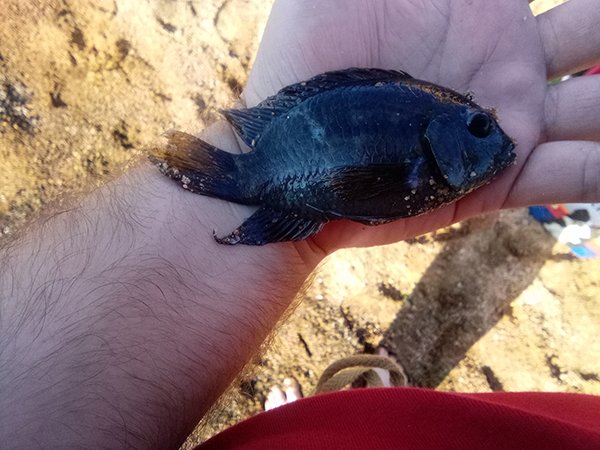 This species of cichlid lacks a common name. I have a member of the same genus in an aquarium at home, so I know a little about it. The members of this species that I saw were about four to five inches long and about as wide as a human hand. They like fast-moving water and were found in the same habitat as the Jaguar pleco. They are known to spawn in the Brazilian rainy season, releasing large batches of eggs at the same time and spawning multiple times in a breeding season.1 Hundreds of babies will hatch at a time, making it difficult for predators to eat them all. 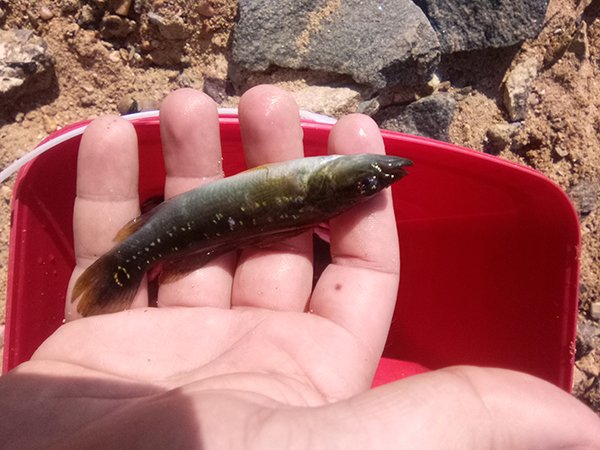 This is a species of pike cichlid and was the least common of the three species I was able to identify. The specimens I saw were four to five inches long, but I was told they can get several inches longer than that. They are sexually dimorphic during spawning season but not the rest of the year.2 They are ambush predators, waiting for their prey—most likely the small Astyanax sp. we will discuss in a minute—to come within reach and then pouncing.

I can place these species to a genus (I think), but I am unable to definitely identify a species. There may be as many as three species in the river area I explored. There are likely at least two. They school in groups containing hundreds of fish. Most are too small to be caught by the cast net the fishermen were using, but a bottle trap will catch dozens of the small ones. The larger, more colorful ones may not be an Astyanax species, but I have been unable to place the genus so far. If someone knows, please contact me and I will update the article.

The number of created kinds represented here is unknown. Fish are highly under-studied from a baraminological perspective. My gut tells me there are four kinds here, but Cichlasoma and Crenicichla share the same family (Cichlidae), so it’s possible there are only three. This trip was especially fun for me because on my desk at work is my friend Chiclet. Chiclet is a female convict cichlid (Amatitlania nigrofasciata) who was hatched in one of my aquariums at home. She was the only survivor of her fry, so she came to work with me as a mascot. If all cichlids are of the same kind, she is probably distantly related to the two cichlids I found on my trip. However, if my instinct is right, she is probably only related to the Cichlasoma species.

Here is your clue for next week:

This snake kind takes its name from its diminutive size and digging lifestyle.

Have you ever had a question about created kinds but didn’t know who to ask? Have you ever wanted to learn more about your favorite kind? Well, now you can! You can ask me, Inspector Barry Mins, a question! Have your parents help you fill out this form, and you might get your question answered in my column! If you have any questions about created kinds, feel free to send them my way!