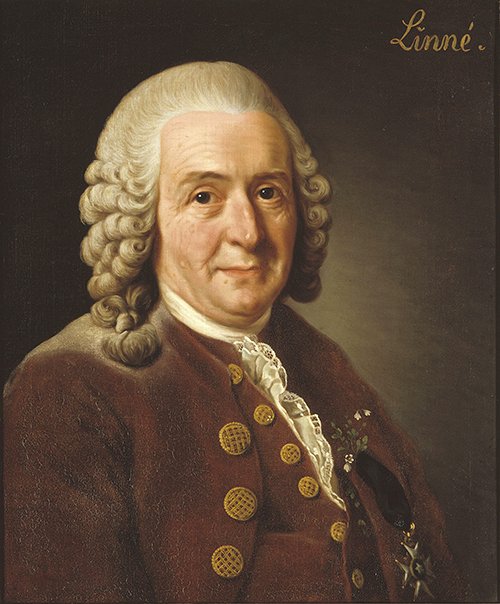 Carl Linnaeus in a portrait by Alexander Roslin [Public domain], via Wikimedia Commons

Carl Linnaeus, also called the father of taxonomy, created the system for the classification of plants and animals known today as the Linnaean System. He believed in the constancy of kinds, the idea that one animal kind could not evolve into another.

Carl Linnaeus was born in Sweden in 1707. With a father who was a pastor and an amateur botanist, Carl became interested in botany, the study of plants, at a young age. His garden at home fueled his love of plants, and when grew up, he studied botany and physiology in college. When he went to Uppsala University to study medicine and science, his professors were so impressed with his knowledge that they made Linnaeus a lecturer of botany in 1730. He began teaching geology (the study of the earth) three years later.

In 1732, Linnaeus was chosen to go on a trip to Lapland to study the local plants and animals. He wrote poetry about his trip, and began by calling God the “Almighty Creator and Preserver of all things.” During his expedition, he traveled through Germany, France, Holland, and England, taking notes on all the wildlife he found.

Linnaeus returned to Sweden in 1738 and started a successful medical practice, developing a new way to cure certain diseases. He eventually became a professor at Uppsala University, teaching students about medicine and hygiene. A year later, he became a professor of botany, lecturing in zoology (the study of animals) and geology as well.

In 1747, Linnaeus became the chief royal physician, and although he loved studying medicine, his main passions were still botany and zoology. He continued in his studies and later created a system to classify plants and animals. Many would argue his classification system was his greatest contribution to science.

The Linnaean System was important because so many new plants and animals were being discovered, and it was hard to keep track of all of them. The Linnaean System helped sort the animals and plants into categories, making it much easier for scientists at the time to process all the information. He began his system by dividing plant and animal kingdoms into phyla, then classes, and then orders. Orders branched into families, then genera, and then different species. Then the plant or animal was known by its genus and species. For example, Felis catus is the scientific name for a domestic cat.

Linnaeus strongly believed that animals and plants were created according to separate kinds, just like the Bible says in Genesis 1:21: “So God created great sea creatures and every living thing that moves, with which the waters abounded, according to their kind, and every winged bird according to its kind. And God saw that it was good.” He opposed the evolutionary idea of animals and plants changing into other kinds, also known as transmutation. He once said, “Let us . . . not set aside God’s works, but, guided by them, revere the Master!”