The largest-known open-ocean crocodile was more than 20 feet (6 m) long and had a head the size of T. rex.

The largest-known open-ocean crocodile was more than 20 feet (6 m) long and had a head the size of T. rex.* Larger than modern saltwater crocodiles and even great white sharks, Plesiosuchus had flippers and a fish-like tail for swimming in the open ocean. Plesiosuchus probably attacked and ate fairly large prey: its teeth were large, with serrations like steak knives, and most tooth specimens found were generally free from wear.

But the unusually wide skull and oft-broken teeth of Dakosaurus, a smaller marine crocodile found in the same rock units, point to a different way of catching prey. When Dakosaurus opened its mouth quickly, it created a strong suction force that could pull in fish and other animals.** 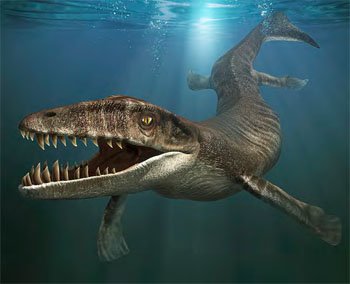 When Dakosaurus opened its mouth quickly, it was able to create a strong suction force that could pull in fish and other animals.

The researchers who described Plesiosuchus and Dakosaurus thought it was strange that two large swimming crocodiles would share the same patch of ocean without a fight. But they found a similar situation with today’s killer whales. It turns out that the smaller killer whales are often suction-feeders, and their mouths are filled with cracked and broken teeth. Larger-bodied populations, though, attack sharks and other whales, and show less tooth damage. Perhaps Plesiosuchus and Dakosaurus managed the same kind of specializations in prey items. If so, they could live in the same place, but not compete with each other for food.

These two extinct crocodiles were likely part of the same created kind (but a different kind than living crocodiles), so their different physical forms and modes of life were part of their created designs to “Be fruitful and multiply, and fill the waters in the seas” (Genesis 1:22).

We can only guess about the appearance of the teeth and jaws of the original created crocodile kinds. After all, created as vegetarian creatures, they did not eat other creatures in the beginning. Eventual variations of crocodiles, which maximized their hunting ability in a fallen world, did not involve evolution, just variation within a created kind.