I am a 14 year old Christian homeschooled girl. I have always loved the ocean and everything in it, and I do a lot of research on it. I have always been very interested in sharks. But lately, I have been coming across an extinct shark called the megalodon. Since it is extinct, they don’t have much info on it. I was wondering what your take on this shark is, and is it even real? Did it ever exist? What would the bible say about this giant shark? Thanks!

Ellie, megalodon was a real sea creature that was very common in pre-Flood waters. We know this because of fossil evidence that has been found, including fossilized teeth and a few vertebrae. Based on the teeth that have been discovered, it is estimated that megalodon could have been close to 60 feet long—twice as long as a great white shark—with jaws that could open nearly six feet wide and seven feet high!1 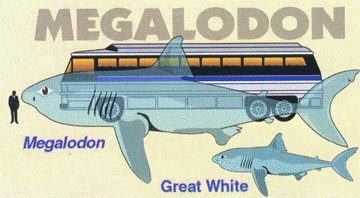 The Bible tells us that God created sea creatures, including sharks, on Day Five of the Creation Week around 6,000 years ago (Genesis 1:20–23). The Bible also tells us that all sea creatures originally ate plants (Genesis 1:29–31), although this changed at some point after Adam and Eve sinned in the garden of Eden. We know there was a global Flood (Genesis 7:11–24) during which all people and land animals perished—except for the people and animals on Noah’s Ark. Many sea creatures also died during the global Flood. This is evident from the fossil record that we see today.

The Flood was a catastrophe that changed the entire earth, including its climate. Since conditions changed both on land and in the sea, it was harder for some creatures to survive. The Bible confirms that large sea creatures existed after the Flood, such as the leviathan described in Job 41:1–34. However, megalodon is one of those creatures that may have become extinct, although we really can’t be sure, given the size and depth of the oceans.

To read more about megalodon, sharks, and sea monsters, please see the following: