When we start with the Bible, we know that God created everything in just six days (Genesis 1; Exodus 20:11). Each day of creation He formed something unique and amazing that brings glory to Him. Day Six was His final day of creation. What did He make on this day? 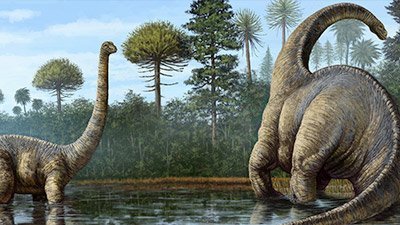 On Day Six, God commanded the earth to bring forth living creatures (Genesis 1:24). All of the animals that live (or lived) on the land—such as elephants, horses, and dinosaurs—were created on this day (Genesis 1:24–25). And each kind was unique and different, from tiny mice to the huge T. rex to howling monkeys. Each one was created to reproduce according to its kind (Genesis 1:25), so one kind will never turn into another kind. Dogs always have baby dogs, cats always have baby cats, and horses always have baby horses.

After He finished creating the animals, God turned His attention to His most important creation—mankind (Genesis 1:26). God created man and woman in His very image (Genesis 1:27), “and God breathed into man the breath of life, and man became a living being” (Genesis 2:7). Man is unique among all that God made. None of the animals were created in God’s image, only man and woman were. God even created a special place for them to live, the Garden of Eden (Genesis 2:15).

God created Adam, the first man, from dust (Genesis 2:7) and made Adam’s wife Eve from his rib (Genesis 2:21–22). This was the very first marriage, created by God. He blessed them and told them that they were to rule over the earth and fill it with children (Genesis 1:28).

Now, Adam, Eve, and all the animals were created to be vegetarians. This means they only ate plants (Genesis 1:29–30). This is because there was no death in God’s original creation. Adam and Eve were created never to die, and so were the animals. So they only ate all the delicious fruits, vegetables, and plants that God had made on Day Three.

At the end of Day Six, God looked at all He had made, all the different animals and Adam and Eve, and He said everything was “very good” (Genesis 1:31). Then there was evening and morning, the end of the sixth day (Genesis 1:31).

Made in God’s Image

Where Was the Garden of Eden Located?