Birds, bats, bees, butterflies, and all sorts of living things are responsible for keeping the plants all around us growing and healthy. God’s design is everywhere, even in the tiniest insects! The next time you see a bumblebee, stop to look at what the little guy is up to. If he’s near a flower, he’s probably doing his job as a pollinator!

Pollinators carry pollen from one plant to another, allowing the plant to bear fruit and reproduce. But some of our pollinating friends don’t choose just any plant. They’re picky with their food, and certain species of insects are responsible for pollinating a certain type of plant. The relationship between these pollinators and plants is important: without it neither they nor their favorite plants would exist! 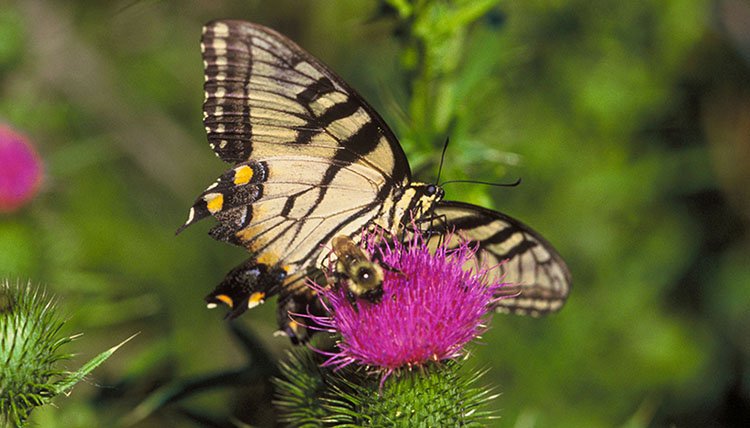 By John and Karen Hollingsworth, for the U.S. Fish and Wildlife Service, via Wikimedia Commons

Swallowtail butterfly and bee on a milk thistle.

With so many species of plants and pollinators roaming the world today, how do we connect them to what God’s Word says about Creation and the worldwide Flood? God created plants on Day Three, but he didn’t create pollinators until Days Five and Six. How did those plants survive without their pollinators? There is no way they could have survived for millions or even thousands of years. If we take into account that the days described in Genesis were actual days, not long periods of time, the plant life would only have to wait two or three days before their pollinating friends helped them reproduce.

What about the Flood? The earth changed dramatically after the Flood, and it likely took some time for certain plants to spring up again. Some plants were brought onto the Ark to feed Noah’s family and all the animals there, but God did not command that plants be aboard like he did the animals. Plants and pollinators after the Flood had to be less picky to survive, since they had to adjust to what was available to them. Many likely became extinct. Over time, some hardy plants and insects were able to form special relationships again. This is an example of plants and insects adapting within their kinds to be successful at what they do—and they didn’t need millions of years to do it.

God’s Word is the ultimate authority, but Scripture does not specifically address the relationship between plants and their various pollinators during Creation or after the Flood. And we weren’t there to see what happened! We can make a hypothesis, or an educated guess, based on the scientific evidence in the world around us and based on what the Bible has to say about plant and animal life existing together. God hasn’t given us all the answers to specific questions, but as Solomon says in Proverbs 25:2, it is to our glory to search for answers.