In the sun, the feathers of the hummingbird flash a metallic green and the throat of the male sparkles a fiery red color. 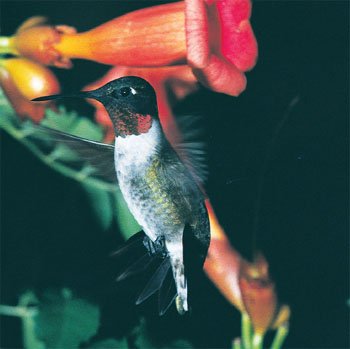 One-third of this bird’s total weight is made up of breast muscles. The energy needed is phenomenal—it eats twice its body weight every day. Operating at the same energy level as this tiny bird, our hearts would beat 1,260 times a minute and our body temperature would be 385 degrees centigrade. We would explode!

The hummingbird has a needle-like bill that penetrates deep into flowers to extract nectar. A long, trough-like tongue holds the nectar; this tongue can dart into the flower and be licked 13 times per second. This little bird is attracted to red flowers but also feeds on honeysuckle, petunias, lilacs, and other flowers, aiding in pollination. It is also fond of some insects and spiders. It will sometimes get into battles with bees over feeding rights.

The ruby-throated hummingbird migrates more than 1,850 miles (2,977 km) from Nova Scotia, Canada, to Central America, flying between 55 to 60 mph (89 to 97 km/h). Before migrating, the hummingbird will put on a fat layer equal to half of its body weight for traveling fuel.

During courtship, the male makes a display for its mate by flying back and forth in an arch. The female builds a small nest out of lichen and leafy materials, usually between 5 and 20 feet (1.5 to 6.1m) off the ground. During the night, hummingbirds enter into torpor, a sort of temporary hibernation. A nesting female, however, stays awake and keeps her eggs warm. The female incubates two white bean-sized eggs. In 16 days, the chicks hatch and are fed nectar and small insects. In three to four weeks, they leave the nest. Females are thought to return to the same nest every year. During incubation, the male may look for another mate.

Hummingbirds are spunky and attack birds much larger than themselves such as eagles and crows. Their enemies are large spiders, praying mantises, frogs, and dragonflies, just to name a few.

Weight: 1/10 ounce (3.11 g)
Length: 4 inches (10.16 cm)
Life Span: 5 years
Special Design Feature: The hummingbird can hover and fly forward or backward by beating its wings an incredible 90 times or more per second.
Did You Know? You would need to eat 1,300 hamburgers a day washed down with 63.4 quarts (60 liters) of water to equal the energy needed each day by the hummingbird. 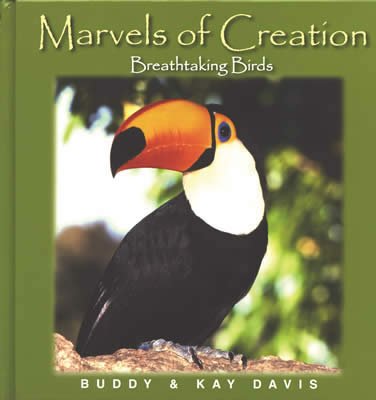