A Humdinger of a Challenge

Hummingbirds seem to have been designed specifically to defy evolution.

Hummingbirds seem to have been designed specifically to defy evolution. Ornithologists have long marveled at their thin wings, which beat at an incredible rate of up to 80 times per second. This blur of feathers allows them to hover near plants that can’t hold their weight. Now evolutionists have another marvel to explain: how the hummingbird's versatile bill “snapped” into place. 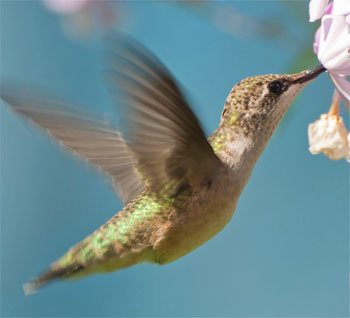 Unlike that of most birds, the hummingbird's beak is made from bone which allows it to flex almost like a diving board.

The hummingbird’s straw-like bill is excellent for sipping nectar from flowers, but these birds need to consume other types of food to fuel their wings. On a typical day, a hummingbird needs to consume 300 fruit flies or similar insects. While a straw may seem ill-suited for this task, researchers have discovered that the hummingbird’s bill is quite versatile.

Unlike that of most birds, the bone of the hummingbird’s lower beak is designed to flex almost like a diving board. The “springiness” means the beak can widen at the base to create a larger surface for grabbing insects in mid-air. While trying to understand how this unusual design really works, researchers discovered another marvel: the beak snaps shut in less than a hundredth of a second. When the bone reaches its maximum bend, the stored-up energy is suddenly released, causing the beak to snap back.

This is the first time that a “snap-buckling” design, famously employed by the Venus flytrap, has been seen in a vertebrate animal.1

No matter how intently some researchers may try to deny the Creator’s handiwork, it snaps right back into focus.