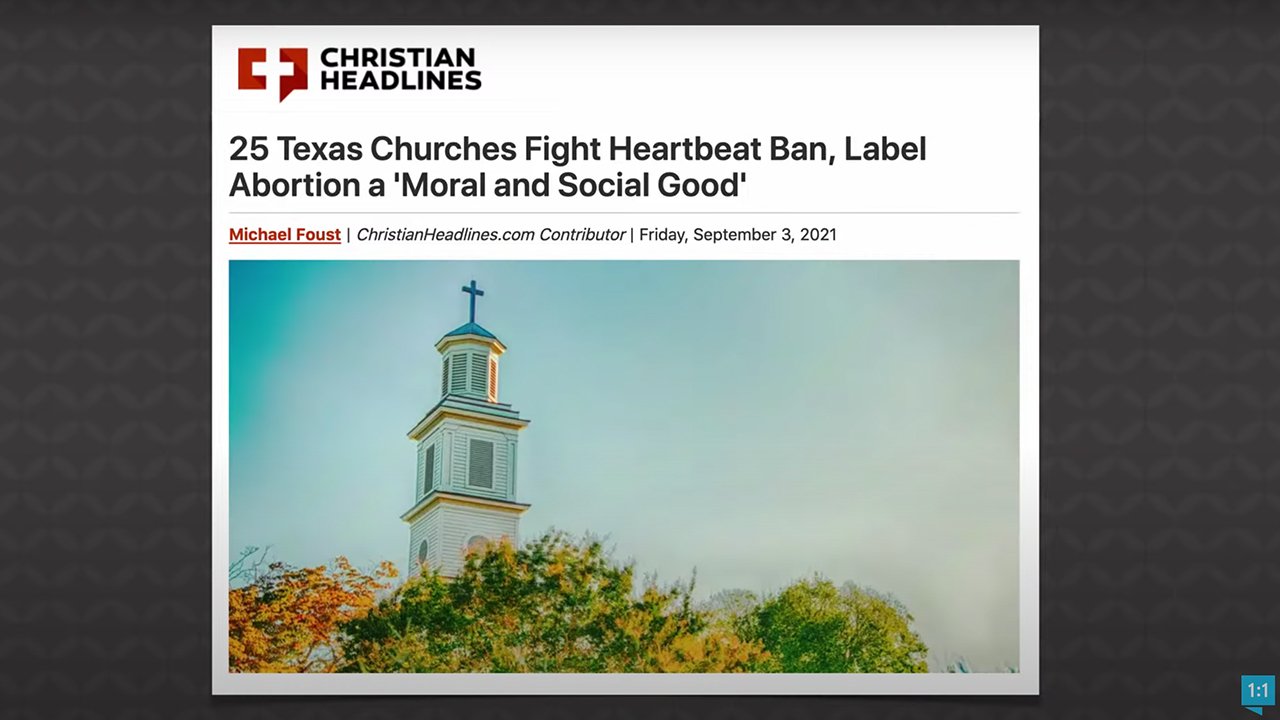 What is abortion—a hideous evil or “a moral and social good”? Well, that depends on your starting point, God’s Word or man’s word! Sinful human beings, who are in rebellion against God and ignore his Word and look to their own selfish, dark hearts for “truth,” will affirm darkness instead of light, death instead of life, and call good evil and evil good (Isaiah 5:20).

The state of Texas has been in the news recently because lawmakers have enacted a “heartbeat bill” that bans abortions after a heartbeat can be detected (usually around six weeks’ gestational age). This is, of course, a good step in saving unborn lives, but it doesn’t go far enough as every person is fully human from the moment of fertilization, not just when a heartbeat can be detected. But a coalition of 25 “churches” in Texas believes the opposite and is fighting to “eradicate stigma around reproductive freedom in Texas . . . one congregation at a time.”

Any congregation that wants to join the coalition (so far most of the “churches” are Unitarian Universalist, with some Presbyterian and one Baptist congregation as well) must affirm the following three principles:

Trust and Respect Those Who Murder?

To this group, “trust and respect women” means “allow women to make whatever choices they want—even murder—and applaud them for doing so, contrary to the clear teaching of the Word of God (e.g., Exodus 20:13).”

No Pricking of the Conscience Here!

A congregation “free from stigma, shame, or judgment” actually means “we will never judge your beliefs or actions against the authority of the Word of God (Philippians 1:9–11) and allow the Holy Spirit, through the bold, uncompromising preaching of his Word (John 16:7–8), to convict you and draw you to repentance. Instead, we will ‘lovingly’ affirm your sin (Romans 1:32) and allow the unrepentant to continue on a path towards eternal damnation (Revelation 21:8)”

As an aside before I get to the third point . . . do they hold this same standard for men in the congregation? If a young man fathers a child and then runs away, abandoning the young woman and the child, is he “trusted and respected” and freed from “stigma, shame, or judgment” for child abandonment? Likely they would not feel that way towards the father. But why the double standard? (And in his case, he merely abandoned the child—he didn’t murder him or her, as happens in an abortion!)

But why the double standard? Why is the child’s life suddenly valuable, simply because he or she has been born?

Or if, when the child is born, the man (or woman) decides he was not ready to be a parent, this child is too expensive, or this child simply doesn’t fit with his lifestyle, and he murders that child (which is exactly the same thing as abortion, just a different location and level of development—still the same child, made in God’s image (Genesis 1:27)!), will the church trust and respect him, offering him an affirming “safe space”? Very likely they would be horrified and turn him over to the authorities! But why the double standard? Why is the child’s life suddenly valuable, simply because he or she has been born?

On to number three: By “comprehensive and affordable reproductive health services,” they really mean “we believe in the freedom for a mother to murder her unborn child.” Health care does not result in the intentional death of a human being. That’s not health care . . . that’s murder!

And by “moral and social good,” they mean “by our arbitrary standard of right and wrong, we believe murder is a good (moral) way of addressing social issues such as poverty, fatherlessness, illness, disability, child abandonment, abuse, etc.” But killing people is not the compassionate way of addressing these issues! These churches need to reject our culture’s thinking and embrace the compassion of Christ who commanded his church to care for orphans and widows (James 1:27)—not kill them—and to speak up for the poor and destitute, who have no voice (Proverbs 31:9).

Many, many, many churches, organizations, and individuals across this nation are providing compassionate, practical, life-saving care to mothers, fathers, and babies in need. Instead of advocating the killing of the unborn, let’s base our thinking on the Word of God—not what is “easiest,” most “convenient,” or most socially acceptable—and understand and call out abortion for what it is—a hideous evil.

Neglecting the Most Important Message

By refusing to call out sin and urge people to repentance, these “churches” are neglecting to present women with the gospel message.

By refusing to call out sin and urge people to repentance, these “churches” are neglecting to present women with the gospel. People need to understand that all have sinned (Romans 3:23) and stand guilty before a holy God. Yes, abortion is a sin, but that’s why Christ came—to save sinners! He died on the cross, in our place, and took the penalty of death we deserve upon himself. Then he rose from the grave, conquering sin and death. He now freely offers new, eternal life and forgiveness from our sins to everyone who will repent and trust in him. And for those who have done so—no matter what they have done—they stand forgiven before the Father, no longer condemned because of what Jesus has done.

If we confess our sins, he is faithful and just to forgive us our sins and to cleanse us from all unrighteousness. (1 John 1:9)

There is therefore now no condemnation for those who are in Christ Jesus. (Romans 8:1)

If you confess with your mouth that Jesus is Lord and believe in your heart that God raised him from the dead, you will be saved. (Romans 10:9)

For God so loved the world, that he gave his only Son, that whoever believes in him should not perish but have eternal life. For God did not send his Son into the world to condemn the world, but in order that the world might be saved through him. Whoever believes in him is not condemned, but whoever does not believe is condemned already, because he has not believed in the name of the only Son of God. (John 3:16–18)

This item was discussed yesterday on Answers News with cohosts Bryan Osborne, Dr. Jennifer Rivera, and Roger Patterson. Answers News is our twice-weekly news program filmed here at the Creation Museum and broadcast on my Facebook page and the Answers in Genesis Facebook page. We also covered the following intriguing topics:

Watch the entire episode of Answers News for September 15, 2021.