Are Christians Against Abortion Because of an “Ancient Mistranslation”? 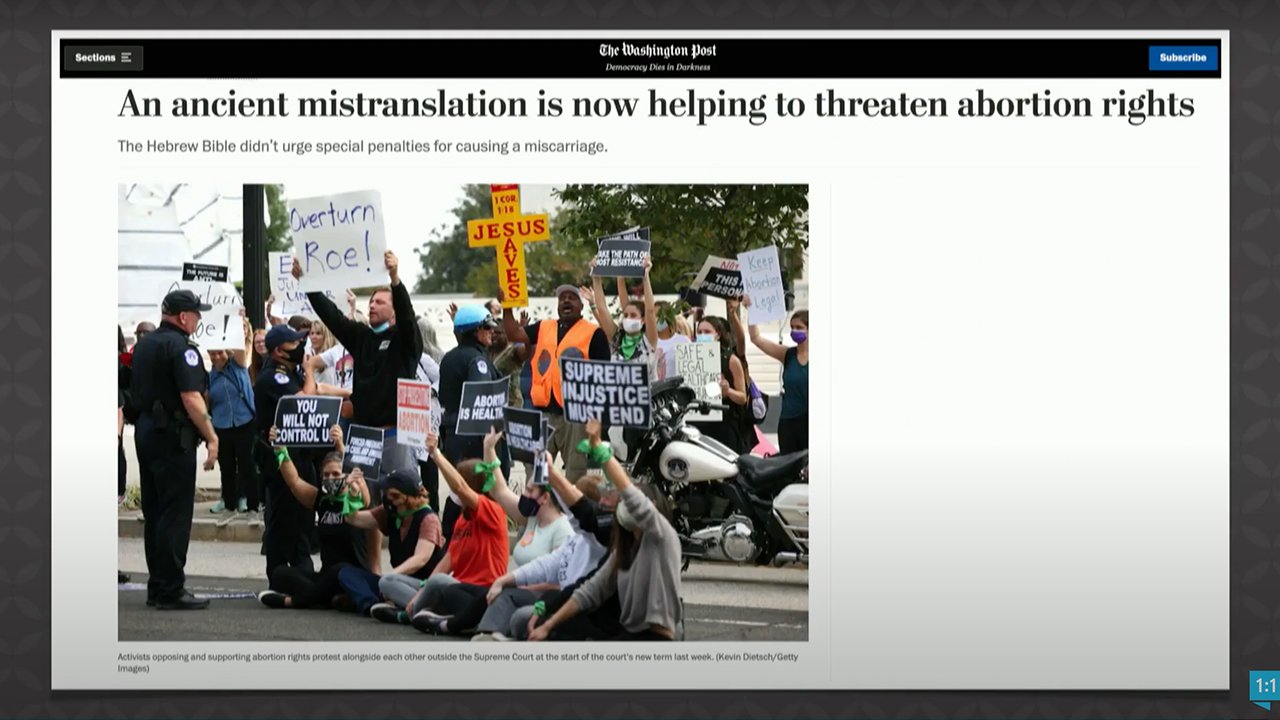 It’s amazing the way that those who want to justify immorality will use the Bible to do so! Often such people will take a passage that teaches one thing and twist it to “mean” the opposite of what the text clearly teaches. And a recent commentary in The Washington Post is a perfect example of such twisting of the Scriptures.

The authors argue that Christians are against “abortion rights” (there is no such thing—rights are endowed by our Creator, who said, “Thou shalt not murder,” Exodus 20:13) because of two verses from the Law (Exodus 21:22–23), which they believe are often mistranslated.

How absurd. Christians who believe the Bible are against abortion because of the totality of Scripture, which teaches that (1) humans are fearfully and wonderfully made (Psalm 139:14) in God’s image (Genesis 1:27); (2) murder is wrong (Genesis 9:6); (3) we’re to speak up for those who have no voice (Proverbs 31:8); (4) God hates those who shed innocent blood (Proverbs 6:16–17); (5) human life in the womb is described with the same terminology as children already born (Luke 1:41, 18:15); and (6) a human life has so much value that the Creator of the world stepped into history to pay the price for our sin so we might be saved from its consequences! While abortion advocates say we should sacrifice the life of a child for the desires of the mother, father, or others, the gospel says lay down your life for the good of another. That’s just the short version of why so many Christians are (or should be!) vehemently opposed to the slaughter of unborn children in their mother’s wombs!

But what about their argument that there’s a mistranslation in Exodus 21? AiG’s Tim Chaffey, the content manager for our attractions, thoroughly debunks that claim:

Put simply, The Washington Post commentary focuses on the wrong word in Exodus 21:22–23 and betrays an ignorance of Christianity. Since it’s in The Washington Post, we can have little doubt that they aren’t going to handle Scripture faithfully. In fact, I would go so far as to say that this paper wouldn’t publish a commentary supportive of pro-life using Scripture!

So, the argument in the article is that Christians cite only these two verses in Exodus to make a case against abortion:

When men strive together and hit a pregnant woman, so that her children come out, but there is no harm, the one who hit her shall surely be fined, as the woman's husband shall impose on him, and he shall pay as the judges determine. But if there is harm, then you shall pay life for life.

Back to the commentary: the authors claim that the keyword in Exodus 21:22–23 is the Hebrew ‘ason, translated as “serious injury” (NET), “harm” (NKJV, ESV), “injury” (NASB), etc. The LXX (Greek Old Testament) translators, who were generally very good in the Pentateuch, chose the word exeikonizomai, which The Washington Post authors say should be translated as “from the image” (ek as “out of, from” and eikon as “image”). While, as they say, that is a literal rendering, we need to look at the context to see what it means. The various LXX versions in English that I have each translate it as “not fully formed” or “imperfectly formed.” In other words, the idea is that the child who is born has some sort of deformity (“not in the form of”). This is obvious given the imposition of the lex talionis (law of retribution, i.e., eye for an eye, tooth for a tooth, etc.) in the following verses.

The real mistranslation in this verse occurs just a couple words earlier. (This is what I focused on in a 2011 article I wrote.) Some English translations (RSV, NRSV, and Amplified are the only ones I found) use the word “miscarriage” instead of referring to premature birth. By doing this, they make it seem as if it’s the mother’s injuries or life that are in view in the following verses. But this is not the meaning of the word or the point of the passage. It all has to do with what happens to the child. If there is no injury, then the man pays a fine. If the child is injured or dies, then the attacker pays eye for eye, life for life. You will notice that The Washington Post piece uses “miscarriage” in both “translations” of the passage, even though the word does not refer to miscarriage. The Hebrew and Greek both have a meaning of something like “the child(ren) go out.”

Think about how foolish the argument is in their article. The authors claim that Exodus 21:22 states either of the following:

Hebrew: If a man hits a pregnant woman so that she miscarries but there is no further harm (to the mother), then the man pays a fine imposed by the judges. (My 2011 article rebuts this view.)

What? How ridiculous is that argument? If the child is already dead, why would it matter if the child is deformed or not? Obviously, the verse is not talking about a dead child (unless caused by the attacker). It is talking about a child who is born prematurely and may or may not be injured/fully formed as a result. Rather than being a verse that could be used in favor of abortion, this passage teaches that the unborn has identical value to the one already born.

The writers of the article make other egregious errors. For example, they write:

Theology, based on that translation, soon followed. It’s easy to see how Saint Augustine, working out of the Septuagint, could develop his theory of ensoulment from here; a fetus early in formation, or in the early stages of gestation, did not have a soul, and thus it was not considered manslaughter to cause its accidental miscarriage. A fetus that was more “formed” did have a soul, so a person who caused its miscarriage would be, indeed, liable as though they had killed a fully formed person. Saint Thomas Aquinas, too, pointed to the moment of “quickening” — the moment at which fetal movement could be detected by the pregnant person — as the point of ensoulment.

Sorry, but Augustine wasn’t “working out of the Septuagint.” He struggled with Greek and didn’t know Hebrew. He may have been commenting on the LXX here, but he certainly wasn’t “working out of it” as his preferred translation. Later in life, he became a little better with Greek, but it is well known that he worked out of the Vetus Latina (the Old Latin prior to the Vulgate). The Vetus Latina was based on the LXX, so the statement isn’t necessarily 100% wrong, but notice how they are trying to connect a supposed mistranslation in the LXX (when really it means the same thing) to Christian theology, as though the church is basing its views on Augustine. In the Fearfully and Wonderfully Made exhibit at the Creation Museum, which makes a biblical and scientific case for the sanctity of unborn life from the moment of fertilization, we don’t ever cite Augustine or Aquinas. We cite Psalm 139; Genesis 1:26–27 and 9:6; Luke 1:43–44; Matthew 1:23; and Exodus 21:22–25.

Besides, three hundred years prior to Augustine, the Didache (Teaching of the Apostles, late first–early second century) stated, “[Y]ou shall not murder a child by abortion nor kill them when born” (Didache 2:2). The Epistle of Barnabas (late first century–early second—not the 16th century pseudepigraphal Gospel of Barnabas) states:

But never mind those details! Christians are supposedly against abortion, the columnists argue, because Augustine supposedly relied upon a supposedly unreliable translation of Exodus 21:22, and if we were to just listen to the liberal theologians’ non-sensical understanding of the passage, then we would “see” that the Bible doesn’t speak against abortion at all.

It’s so sad that people are so willing to twist Scripture in a way that leads to the murder of babies.

I discussed this item today on Answers News with cohosts Tim Chaffey and guest Patricia Engler. Answers News is our twice-weekly news program filmed live before a studio audience and broadcast on my Facebook page and the Answers in Genesis Facebook page. We also covered the following intriguing topics:

Watch the entire episode of Answers News for November 8, 2021.