It seemed like an impossible task, but the Creation Museum team has finally located them—Methuselah’s hands.

Unearthing incredible facts and artifacts for the Museum requires some exciting adventures. But this assignment was especially tough. How on earth were we going to find the hands of the oldest man who ever lived?

Methuselah, whose name means “when he dies it shall be sent,” was the longest living man on record. In the same generation that he died, at the age of 969, the Lord sent the judgment of a worldwide Flood. 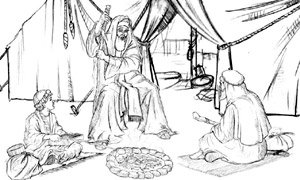 Methuselah was in a unique position: he could have known Adam personally, and yet he lived long enough to be able to share his knowledge with Noah and his children.

Because of his incredible age, Methuselah enjoyed a unique position in history (see table below). As a young man, he could meet Adam and hear first-hand accounts of life in the Garden of Eden; he also lived long enough to recount these true stories to his grandson, Noah, and Noah’s sons.

Methuselah had some amazing stories to tell. His father was Enoch, the godly man before the Flood who “walked with God” and then disappeared because “God took him” (Genesis 5:24). Methuselah also witnessed the moral collapse of Noah’s day, when “every imagination of the thoughts of [man’s] heart was only evil continually” (Genesis 6:5).

The Museum team decided that Methuselah would be the ideal Bible character to tell guests about the turbulent years between Adam’s Fall and Noah’s Flood. As we currently envision this scene in the Museum, Methuselah will be standing in front of his tent, regaling inquisitive “young” men (no older than 600 years) and some children about the true history of Adam and his family.

But where could we find a model for Methuselah’s head and hands? 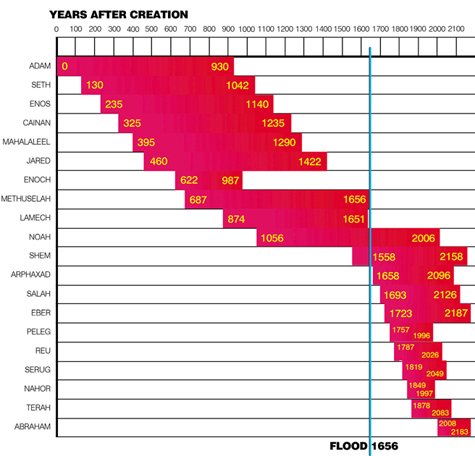 To create Methuselah, our lead sculptor, Brad Toschlog, did some portrait studies of extremely old people. Obviously nobody looks quite 969 years old, but certain facial features are common among the elderly. With some careful study and a bit of creative genius, Brad designed the head of Methuselah, as he’ll appear in the museum.

But as I was talking to Brad about the figure, he explained that human hands are extremely difficult to sculpt, although there is a relatively simple process for converting real people’s hands into casts.

I immediately thought of Ray Armand.

Ray is the oldest man in my church and a personal friend. A spry 86, Ray has the same physique that we imagined Methuselah had. He has the rough hands of a farmer, toughened by a lifetime of hard labor. (Although we will not be using Ray’s face in the Museum, I was struck by the amazing similarities between his wrinkled brow and that of Methuselah, whose head was sculpted before I thought of Ray.)

I still remember walking up to Ray at church the Sunday after my conversation with Brad. I picked up Ray’s hand, turned it over a couple of times, and declared, “I think it’ll do!” 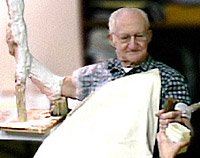 A jovial Methuselah “giving the museum a hand.”

Now, Ray isn’t easily befuddled. But I got him this time! After I gave some more details, Ray seemed to understand what I was suggesting. He graciously agreed to volunteer a morning at the Museum site.

He was a sport throughout the whole production. Alginate (the stuff dentist’s use to make impressions of teeth) gets very cold, and sitting still while it sets can be uncomfortable, but Ray never complained. In fact, our sculptor was so impressed with his new visitor that he asked for permission to cast his feet as well.

Poor Ray—you should have seen him, casts on both feet and another cast on his right hand (wrapped around a staff).

But now his hands—and feet—have been “immortalized” in the Museum. They’re the hands and feet of Methuselah.

We thank the Lord for gracious Christians like Ray, whose prayers and gifts of time will make this unique museum possible.

Listen Carefully to His Words

When people can finally visit the completed Creation Museum, and as they listen to the incredible tales of Methuselah, we hope every guest will hear the real message.

The basic message of the Museum, from beginning to end, is simple. Honor and obey God’s Word (starting with the true history of Genesis 1–11) and find life, or trust and follow man’s word above God’s Word, and suffer judgment.

Methuselah is just one of many, many voices in the Museum that will hammer this message home.

We believe it’s the message our faltering generation most needs to hear. Would you be willing to help us accomplish this vision?