Over the years in the AiG ministry, particularly during the time we were constructing the Creation Museum and now as we are building a full-size Noah’s Ark, I have come across many ‘‘Sanballats.”

Today, I can’t help but think of how the analogy of Sanballat (a character from the book of Nehemiah) relates more than ever to the people who oppose AiG’s proclamation of the creation/gospel message. Let me explain.

When Nehemiah announced he was going to rebuild the wall around Jerusalem, the Bible records the following:

But when Sanballat the Horonite, Tobiah the Ammonite official, and Geshem the Arab heard of it, they laughed at us and despised us, and said, “What is this thing that you are doing? Will you rebel against the king?” So I answered them, and said to them, “The God of heaven Himself will prosper us; therefore we His servants will arise and build, but you have no heritage or right or memorial in Jerusalem.” (Nehemiah 2:19–20)

When AiG announced the building of the Creation Museum several years ago, secularists did not hide the fact that they despised us for attempting to build a Bible-upholding project. Even some people in the church publicly spoke out against AiG. (One of the most vocal museum opponents was a local pastor, quoted frequently in the press!)

Back then, a local atheist, speaking at a public meeting, declared that building our Creation Museum would be a violation of the so-called “separation of church and state”’ because it would not agree with evolution!

After some intense struggles with museum opponents (which made headline news throughout the region), we eventually purchased the land and got the necessary zoning. But a lawsuit was lodged against us and we received additional intense opposition from atheists and others. It became a serious time of prayer for us.

Here is where Nehemiah’s Sanballat account comes in as it relates to the building of our Ark:

Now it happened, when Sanballat, Tobiah, the Arabs, the Ammonites, and the Ashdodites heard that the walls of Jerusalem were being restored and the gaps were beginning to be closed, that they became very angry, and all of them conspired together to come and attack Jerusalem and create confusion. Nevertheless we made our prayer to our God, and because of them we set a watch against them day and night. (Nehemiah 4:7–9; emphasis ours)

With the Ark Encounter, tens of millions of people will be presented with the truth of God’s Word.

When we first announced the building of the Ark Encounter, and then when we actually started construction in August, AiG experienced the same sort of angry opposition. In fact, the battles this time seem to be at higher and more aggressive levels than with the museum construction. You see, the secularists realize that with the Ark Encounter, tens of millions of people will be presented with the truth of God’s Word as they board the Ark and interact with its stunning exhibits.

As Nehemiah was rebuilding the wall, here is what happened:

Then Sanballat sent his servant to me as before, the fifth time, with an open letter in his hand. In it was written: It is reported among the nations, and Geshem says, that you and the Jews plan to rebel; therefore, according to these rumors, you are rebuilding the wall, that you may be their king.

And you have also appointed prophets to proclaim concerning you at Jerusalem, saying, “There is a king in Judah!” Now these matters will be reported to the king.” (Nehemiah 6:5–7)

I was reminded of this passage recently when we learned that the group Americans United for Separation of Church and State had written to Kentucky politicians (including the governor) and also stirred up the media (such as the two, left-leaning major newspapers in the state: the Courier-Journal of Louisville and the Herald-Leader of Lexington) to spread untruths and misinformation about the Ark project.

Anti-Christian groups and the secular media have launched a massive propaganda war (continuing to this day) in their attempt to undermine the Ark Encounter. (You can read about these false accusations—designed to try to turn the general public against the Ark—and read our refutations.)

But I’m reminded of how Nehemiah responded:

Then I sent to him, saying, “No such things as you say are being done, but you invent them in your own heart.” For they all were trying to make us afraid, saying, “Their hands will be weakened in the work, and it will not be done.” Now therefore, O God, strengthen my hands. (Nehemiah 6:8–9)

Now, we do answer the lying critics as we are able. But we don’t allow their opposition to be a distraction in building the life-size, evangelistic Ark. We keep our focus on the fact that the Ark will be one of the greatest witnessing outreaches of our time! 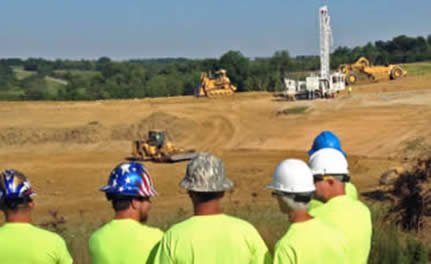 Looking back on the opening of the Creation Museum in 2007, I am reminded of the passage from Nehemiah: “Then it was, when the wall was built . . . .” (Nehemiah 7:1). Today the museum continues to be blessed by God as it draws large crowds and leads to many life-changing testimonies. God willing, the Ark Encounter that is now under construction will open in 2016.

The day the Creation Museum opened its doors, a few dozen atheists and other anti-Christians staged a protest at the front gate. To this day, many of the same vocal opponents are spreading falsehoods as a part of their new attack against the creation/gospel message.

As the opposition is now focusing its attack on the Ark project, I once again am reminded of Nehemiah:

“And it happened, when all our enemies heard of it, and all the nations around us saw these things, that they were very disheartened in their own eyes; for they perceived that this work was done by our God.” (Nehemiah 6:16)

Yes, there are many Sanballats active today. But we realize “there is nothing new under the sun” (Ecclesiastes 1:9).

Yes, the opposition can be an annoyance. But with faith, knowing that God has opened the door, we declare that as it was with the Creation Museum and is now happening with the Ark Encounter, “this work was done by our God” (Nehemiah 6:16).

Keep up to date at ArkEncounter.com.