This creature is of course the three-toed sloth, one of the slowest animals in the world. In fact its metabolic rate is 31% that of two-toed sloths, making it a slowpoke even among other sloth species.1

With surprising speed, the sloth has invaded pop culture over the past few years, showing up in memes, YouTube videos, and movies like Zootopia and Ice Age. We even have a whole day dedicated to them on International Sloth Day.

Named in the early 1600s for one of the Catholic church’s seven deadly sins, the sloth has been saddled with a bad reputation for centuries. Only in recent years have scientists uncovered research that has been incredibly contrary to our initial impression of these lollygagging sleepyheads. Turns out, the three-toed sloth is a complex creature that serves as a testimony to the resourceful and highly imaginative Creator God. 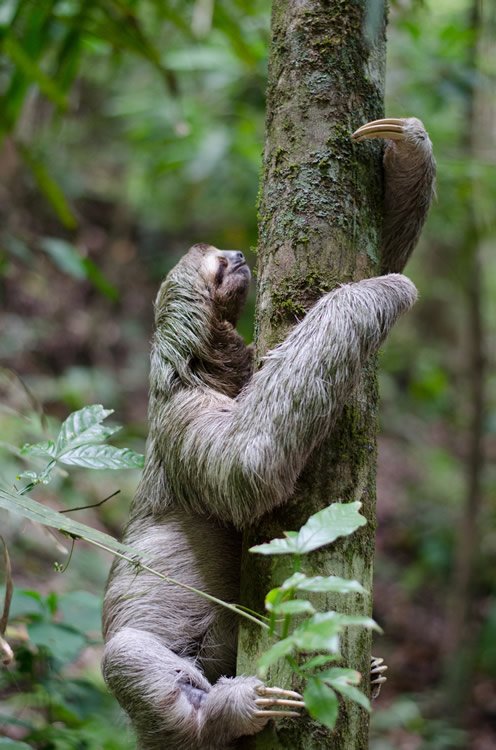 Image by Sebastian Molinares, via Unsplash.

You would be mistaken to assume that because the sloth is slow it is also lazy. Contrary to what we think about such a low-energy creature, the sloth doesn’t sleep much more than we do—about 10 hours (though in captivity sloths are known to sleep up to 15 hours a day). However, even when it’s not sleeping, the sloth spends about 70% of its time resting to conserve energy.2

The truth is that the sloth is not so much lazy or sleepy as it is efficient. Because the sloth has such a low metabolism and only about 25% the muscle tissue of other animals, it moves only when necessary, clocking in around 10 feet per minute.

The sloth can move quickly when the need arises, such as when it’s being chased by a predator—an eagle, a jaguar, or even a human. But for the most part, the sloth is the poster creature for energy efficiency.

In general, it exerts the most energy during its weekly (yes, weekly!) descent to the base of its tree to defecate. It can burn up to 8% of its energy in just one bathroom trip!3

The secret to the sloth’s super slowness is, in part, its diet. Sloths are folivores, which means they eat buds, shoots, and leaves (Cecropia leaves are their favorite). If you’ve eaten many salads, you know that leafy vegetables offer little more than an hour’s worth of energy.

However, the sloth compensates for its low-nutrient diet by digesting each leaf for up to 30 days, extracting every possible nutrient. To help with this digestion, the sloth has several stomachs, like a cow, regurgitating and chewing its food twice to fully digest it. 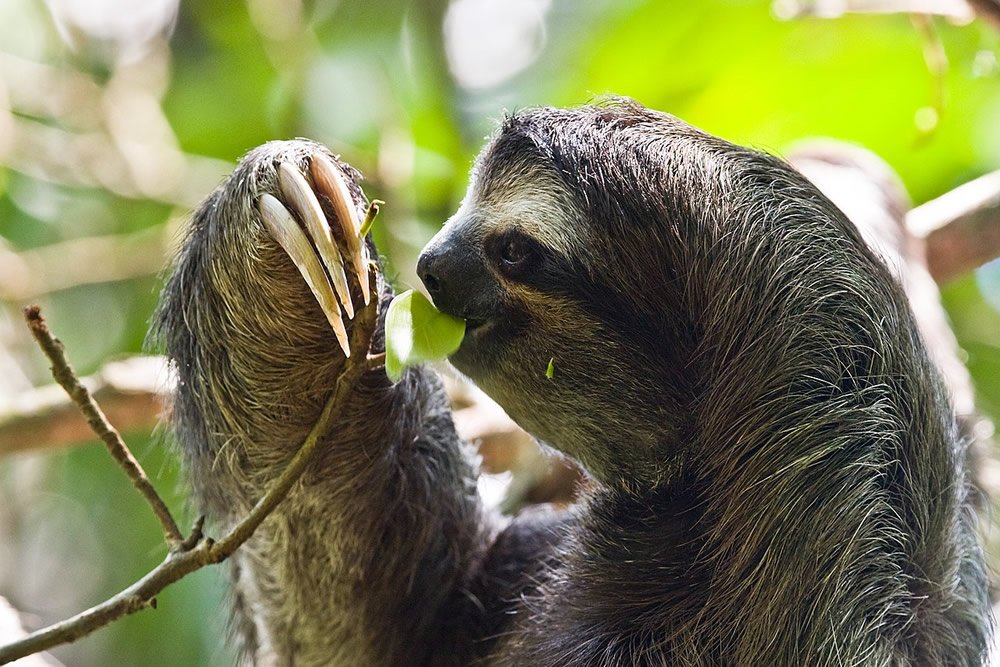 Image by Chmehl, via Wikimedia Commons.

Because the sloth retains its food for so long and only empties its bowels once a week, its stomach and intestines are perpetually full and heavy. This could be a problem for an animal that spends most of its time hanging upside down. However, in his good plan, God designed the sloth with fibrous connectors anchoring its stomach, liver, and kidneys in the abdomen. Without these anchors, the organs would press against the diaphragm and lungs, making it a struggle to breathe, thus expending valuable energy that the sloth doesn’t have to spare. Some researchers suspect that this special design could reduce a sloth’s energy use by 13%.4

Another way that the sloth conserves energy is by adjusting its internal thermostat. It can actually fluctuate its body temperature by about five degrees C to match the atmosphere temperature, further saving energy output.5

Sloths have super strength—and you would too if you spent your entire life hanging from trees. A sloth eats, sleeps, mates, and gives birth to its young in trees. Its 3- to 4-inch-long, curved claws help it cling to branches, and its fingers work the opposite of ours: the sloth has to exert effort to open its fists—like a clip on a chip bag. This function works so well that dead sloths have been found still clinging to a branch.

With all that strength, the sloth is an excellent swimmer, often dropping from a branch into the river to swim to yet another tree. In fact, it can swim three times faster than it can move on land. Its light muscle weight and long arms make for strong breaststrokes, and because it can reduce its heart rate to a third its normal rate, the sloth is able to stay under water for up to 40 minutes.

The Company They Keep

The sloth lives a solitary life in Central and South American rainforests.7 But it’s never really alone. Turns out, the sloth has a sidekick, and in some cases hundreds of sidekicks, living in its fur. New York Times author Nicholas Wade said, “The sloth is not so much an animal as a walking ecosystem.”8

Some researchers report finding roaches, ticks, mites, and beetles within the sloth’s fur; however, the most consistent inhabitant is a species of the pyralid moth, also known as the sloth moth.

It’s quite the deal really. The moths live in the sloth’s fur. When the sloth takes its weekly trek to the ground to defecate, the moths lay their eggs in the sloth’s waste. The larvae feed on the waste, and when they’re mature adults, they fly up to continue the proud tradition of freeloading on the sloth.

The sloth takes a considerable risk leaving the safety of its tree and exposing itself to predators. So what’s in it for the sloth? 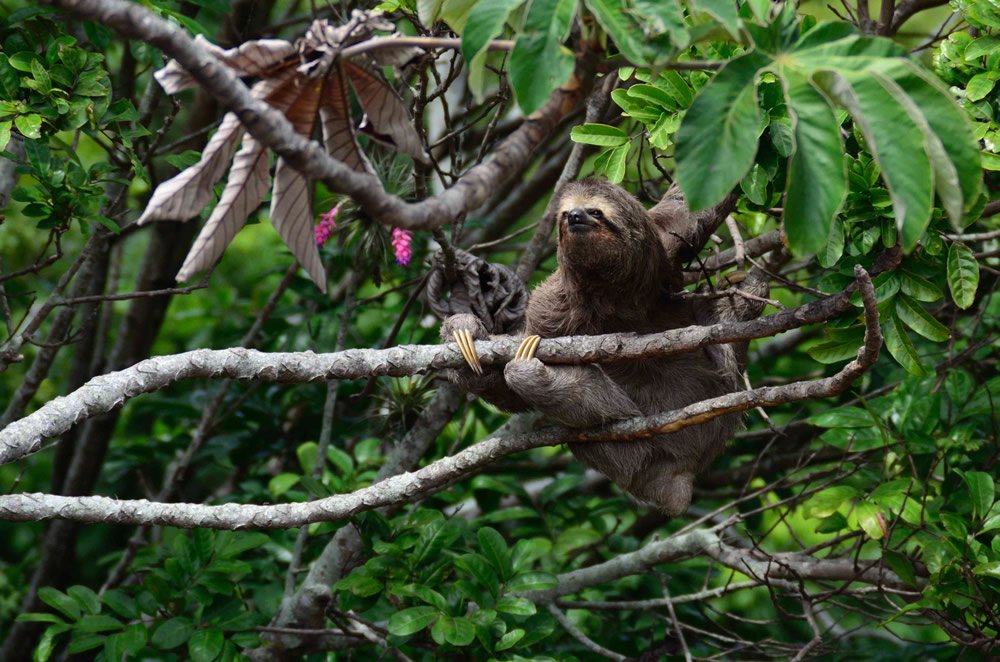 The most likely theory is that the moths help the sloth stay camouflaged. Researchers believe that as the moths die, their decomposing bodies keep the sloth’s fur rich in ammonium and nitrogen; these chemicals create the perfect environment for a bumper crop of algae on the sloth’s fur, which acts as an invisibility cape among the foliage.9

Though sloths are harmless, they are also easy prey in our fallen world. But God designed camouflage as the sloth’s first line of protection.10 Like a moldy shag rug flung in a tree, the sloth grows green algae on its back, allowing it to blend into its arboreal habitat and become virtually invisible to predators and even to researchers. (This is one of the reasons that scientists don’t have much data on sloths—it’s difficult to spot and catch them.)

The sloth’s fur has a short layer that provides it with warmth, and a coarse, long outer layer. In this outer layer, the strands of fur have cracks that collect the frequent rain and moisture in tropical climates. According to National Geographic, the sloth’s fur is “a miniature hydroponic garden for growing algae.”11

Some researchers even postulate that the sloth eats these algae, which are high in lipids, to supplement its otherwise low-nutrient diet. But other researchers cast doubt on this since sloths don’t lick but rather groom themselves with their claws.12

Sloth to the Rescue—But First a Nap

Perhaps no other creature seems more unlikely to offer a life-saving resource than the sloth. However, in 2013, researchers discovered at least 20 types of new fungi on the sloth’s fur.13 Some properties of these fungi could be developed into pharmaceuticals that might potentially fight against malaria, Chagas disease, some cancers, and even MRSA (an antibiotic-resistant superbug). 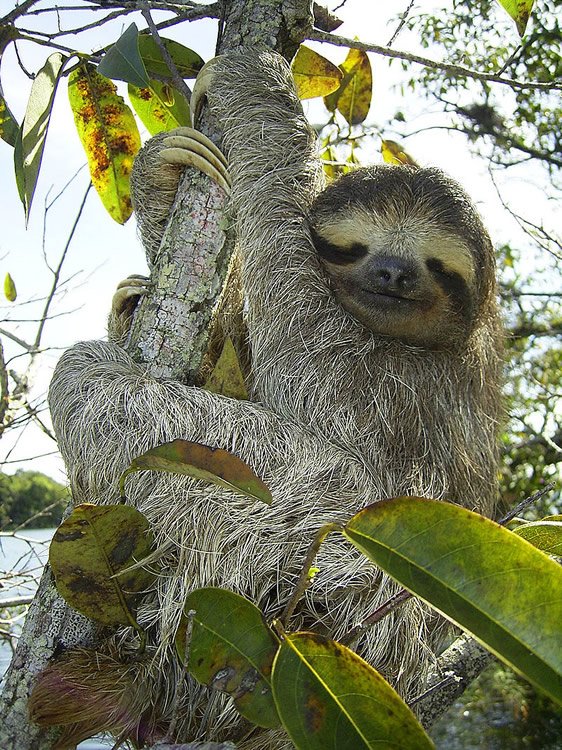 Image by Bradypus, via Wikimedia Commons.

The Centers for Disease Control estimate that 23,000 deaths occur in the United States each year due to antibiotic-resistant bacteria.14 This new fungi found on the sloth could lead the way to new antibiotics with which to fight these diseases better than any treatment we currently have.

So after years of being derided for poor hygiene and laziness, someday the sloth might save the world from nasty diseases—but first it will probably need to take a nap.

Ever So Slowly Bringing God Glory

The sloth is much more than just an adorable, sleepy ball of fur. Its features and habits could only have come together by the design of an imaginative Creator whose diverse creation includes the cheetah and peregrine falcon—two of the fastest animals—and the pokey sloth.

The evolutionary worldview favors the fastest and strongest, expecting the slowest and weakest to go extinct. In God’s plan, however, every creature is purposefully designed to serve a purpose.

The sloth is a good reminder that just as God wanted a spectrum of creatures in the animal kingdom, he also wants all sorts of people for his heavenly kingdom.

The next time you grow impatient at slow people or get frustrated at someone who isn’t exactly like you, remember that God created all kinds of creatures and people. No matter how fast or slow, each has something to offer, and each has a purpose—to glorify the Creator.