Hey kids, welcome back to our series on the mysteries of created kinds.

This week, we are heading to the seashore and the open ocean, looking for sea birds so well known, they were featured as the object lesson in a very famous poem.

This week’s kind is a seabird that is at home nearly worldwide. They forage in the open ocean and are quite rapid fliers. One has been observed flying at speeds of around 70 miles per hour for extended periods (over nine hours).1 While their usual speed is not this fast, the species in this kind are incredibly good fliers, often foraging over open ocean for extensive periods of time with little to no rest. In some species, flight is maintained for 72% of the day and 39% of the night!2 One species has the largest wingspan of all birds, at 12.1 feet across.

When foraging, the most species tend to prefer fish. In one species, fresh fish makes up nearly 90% of the diet.3 Other species prefer cephalopods (octopi, squid, etc.).4 In other species, the diet is mixed between the two.5 None of this should be surprising, given that these are seabirds that spend most of their life soaring over the open ocean.

When these birds nest, many of them nest in large colonies.6 One colony was historically so large, it gave the island it resides on its name! One island is currently estimated to have roughly 5000 breeding pairs per year.7 Despite the large breeding colonies, very few adults successfully breed from year to year. In some places, the percentages are in the single digits, even down to one percent in some places.8 However, in some of the smaller colonies, breeding success is higher.9

Has anyone figured it out yet? You may have been able to get it from the clue alone. If you did, give yourself asome bonus points for familiarity with British literature, and another one for figuring out this week’s kind. This week’s kind is the Diomedeidae—the albatross kind. Stay with us for next week when we abandon the seas for the island of Borneo, where there is a semiaquatic lizard who is the only member of its kind in the world. 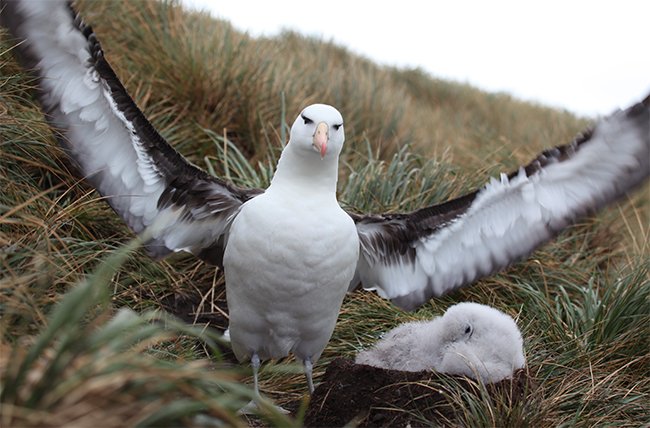 Albatross and Chick, Liam Quinn from Canada, via Wikimedia Commons

Try out this fun crossword puzzle!

Here is your clue for next week:

Have you ever had a question about created kinds but didn’t know who to ask? Have you ever wanted to learn more about your favorite kind? Well, now you can! You can ask me, Inspector Barry Mins, a question! Have your parents help you fill out this form, and you might get your question answered in my column! If you have any questions about created kinds, feel free to send them my way!