Image by Plismo, CC by 3.0 via Wikimedia Commons

Caves, kettles, and a disappearing river—exploring Warsaw Caves in Southeastern Ontario was quite the adventure. This conservation area is home to a variety of features that were formed during the ice age which followed the flood.

Warsaw Caves is a series of seven caverns carved into limestone rock. Limestone is a sedimentary rock composed largely of the mineral calcium carbonate. These layers, like all sedimentary layers, were laid down by the waters of the flood just about 4,350 years ago.

The flood created the perfect conditions for an ice age.

So how did these limy layers become pockmarked with caves? Well, in the years following the flood, much of the northern and southern regions of the world looked very different from how they do today. That’s because the flood created the perfect conditions for an ice age. This ice age covered one-third of the earth in thick sheets of ice. Several hundred years after the flood, as the climate stabilized from the devastating effects of the flood, the ice age peaked and then began to decline. The glaciers began to melt and retreat to the locations where they’re found today (largely the north and south poles).

A lot of water is going to change the landscape.

Now imagine massive ice sheets melting and retreating—that’s a lot of water! A lot of water is going to change the landscape. And it certainly did! The meltwaters formed huge lakes (the Great Lakes are a remnant of that, but even they are small compared to lakes that came before them!) and spillways, through which flowed rivers. These rivers were fast-moving and carved through the landscape, including where they dissolved limestone and left behind these caves.

But it wasn’t just the flowing rivers that made these caves. As the heavy ice moved, the ground rose up (this is called isostatic rebound). The shifting bedrock broke the limestone and created the chunks of rocks that we saw during our visit to this area.

Did You Know?
Exploring caves is called spelunking.

These caves were really fun to explore. Some are really tight, and we had to squeeze to get around. Others were quite large, and the whole family could fit in at once. Passages ran off in different directions, and broken limestone in the “ceiling” often gave glimpses of the trees, sky, and sunlight from various passageways.

Kettles, sometimes called rockmills, are round holes in the bedrock. Some are really small, others were so big we could stand inside of them!

What formed these kettles? These formed when chunks of granite were caught in the fast-moving currents of the post-ice age rivers. They were spun round and round and, being much harder than the limestone, ground their way through the rock.

Today, the slow-moving Indian River has replaced the swift post-ice age river of glacial meltwater. It’s a very pretty river, but, at one point, part of the river disappears. Where did it go? If you stop and listen, you can hear the sound of moving water . . . coming from underground! 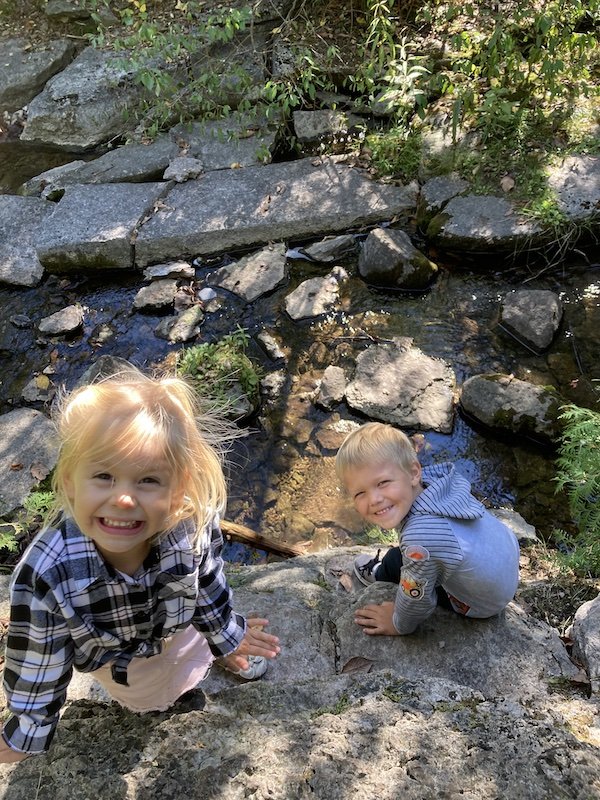 The water goes underground to fill small caverns and passageways in the limestone. We had fun shining our flashlight into these holes and watching the water rush away under our feet.

The true history of the world is found in God’s Word.

Visiting Warsaw Caves gave us a glimpse into a time when the world was a much different place, with a climate greatly impacted by the global flood. Of course, the signs around the park told us a much different story of millions of years, many ice ages, and slow and gradual processes. But we know that the true history of the world is found in God’s Word. It gives us the framework we need to properly interpret the world around us.

When you visit places like Warsaw Caves and see signs that contradict God’s Word, remember to put on your “biblical glasses” and interpret what you’re seeing through the biblical framework of a young earth, a global flood, and a post-flood ice age.

Well, we’re off on another adventure. Until next time, remember what Jesus said when he was praying before he was arrested, tried, and crucified: “[God’s] word is truth” (John 17:17). We can trust God’s Word! It alone is truth.