Recently we explored Big Bone Lick State Historic Site in Union, KY. Big Bone Lick? That’s a weird name! Well, the “Big Bone” part comes from the fossils discovered in the area—fossils of some really big creatures such as wooly mammoths, mastodons, and ground sloths, along with musk ox, moose, elk, deer, and more. All these creatures lived in this part of Kentucky during the ice age that followed Noah’s flood.

So what about the “Lick” part? Well, this area has warm salt springs that bubble up from underground. Large mammals come to lick up the minerals they need that aren’t supplied by the plants they eat. You can still see the salt licks today (we found out they smell like rotten eggs!). 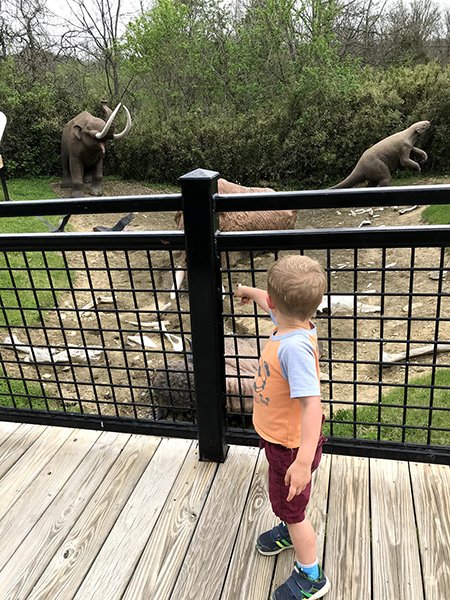 Big Bone Lick used to be home to thousands of American bison (buffalo). Those bison were just a small fraction of the 30-60 million bison that once roamed in herds throughout much of the United States and Canada. Today a small herd of captive bison lives at Big Bone Lick, including a few calves born each year. We got to meet the herd (and see some cute calves!) during our exploration of Big Bone Lick! 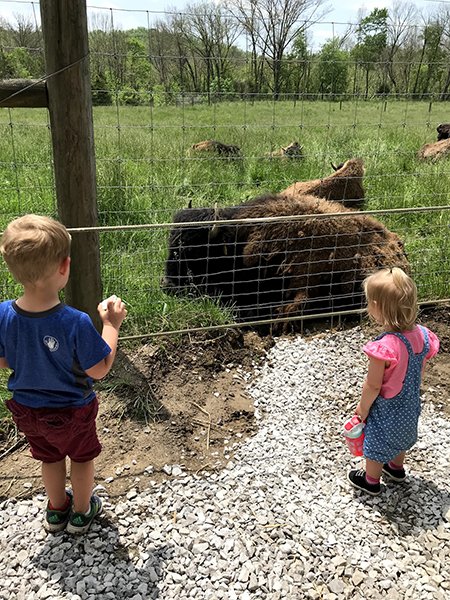 What Happened to the Bison?

So what happened to all the bison? Well, after the flood, the animal kinds began to spread out from where the ark landed in modern-day Turkey (Genesis 8). Eventually (probably by using land bridges exposed after the flood), members of the cow kind ended up in North America and adapted to become bison (bison and cattle can, and do, still interbreed).

After the tower of Babel judgment (Genesis 11), people began to spread out over the earth, and some people reached North America. Undoubtedly, they found bison a good source of food, and bison hides a good material for clothing and shelter. People who later followed those first people also hunted bison and used nearly the entire animal for various purposes.

Fast forward to the days of the “Wild West.” As American settlers started moving out West, they met vast herds of bison. They began to hunt them, kill them for food, clear the land for their fields and cattle, and, sadly, sometimes even to keep the Native Americans from having food to eat. As Americans began traveling by train, they even hunted the bison from the train cars, shooting them and leaving them to decay in the sun.

With 30-60 million bison roaming America, it seemed like there was an endless supply of the shaggy creatures and no reason to take care of them or not kill as many as people wanted. But the bison couldn’t reproduce fast enough to keep up with how many were being killed, and by 1900 only around 1000 bison remained in the whole United States!

Was it wrong for people to hunt bison? Not for food, clothing, or perhaps even to clear the land. God gave us permission to eat meat after the flood (Genesis 9:3), and sometimes killing animals is part of having dominion over God’s creation (Genesis 1:27). We aren’t to be ruled by creation but are to kindly rule creation as image-bearers of the Creator.

But killing millions of bison just because there were so many, and it didn’t seem like we could ever put a dent in such a huge population, wasn’t exercising good dominion. Those settlers were wasting the good gift that God had given to us and not caring for the creation God loves.

Do We Do the Same Thing?

But that made us think—do we do the same thing?

When you’re young, it can feel like you have unlimited years left to live, so it doesn’t matter what you do with your time today. Or maybe you were given a lot of money for your birthday, and it feels like you have so much money it doesn’t matter what you spend it on. But when we waste our time or our money, we’re wasting the good gift that God has given to us. Instead, we can wisely use what God has gifted to us to bring glory to him. Ask your parents for ideas on how you can use your time, money, talents, relationships, and other gifts from God to bring glory to him.

Well, we’re off on another adventure! Until next time, remember Ephesians 5:15–16, “Look carefully then how you walk, not as unwise but as wise, making the best use of the time, because the days are evil.”

Verses to Think About

“And God blessed them. And God said to them, ‘Be fruitful and multiply and fill the earth and subdue it, and have dominion over the fish of the sea and over the birds of the heavens and over every living thing that moves on the earth’” (Genesis 1:28).

“Whoever is righteous has regard for the life of his beast, but the mercy of the wicked is cruel” (Proverbs 12:10).

P.S. Watch our whole adventure with the bison (and some other amazing creatures) in “Jumpers,” the pilot episode of Schus Off! available on Answers TV or on DVD from Answers Bookstore. You can also watch this pilot episode as a special treat below!