Last summer Trevor and I had an epic adventure in beautiful San Diego, California. Friends of ours from Northern Kentucky were attending missionary training out there and needed some help, so Trevor and I flew out to the West coast to lend a hand. While we were there, we got to experience an incredible part of God’s creation.

Over the next few blog posts, we’ll be sharing about that trip, starting today with our exploration of the Anza Borrego Desert, the largest of California’s state parks.

Off to the Desert

We set out for this 600,000-acre piece of desert wilderness in the late afternoon so we could explore it at sunset when it was cooler (the desert in June is no joke!). After driving nearly two hours through beautiful countryside, we started gradually going uphill and then, suddenly, seemingly out of nowhere, the landscape plunged downward. We were at the top of the mountains surrounding the desert, and the entire landscape lay before us—and it was breathtaking!

After slowly winding our way down the mountain (and stopping at the lookouts to “ooohhh” and “ahhhhh” over the view), we made it to the bottom. And it was hot. Neither Trevor nor I had ever been to a desert before, and we were not prepared for 115 degrees (46 degrees Celsius) of bone-dry heat. I thought my skin was going to crack and wither away from the heat and dryness!

But it was beautiful! Unfortunately for us, all the hiking trails were closed due to excessive heat (though two Canadians wandering around in a desert in 115-degree weather probably wouldn’t have ended well anyway!) so we couldn’t explore as much as we would have liked, but what we saw was amazing. Our God truly is a God of immense creativity! 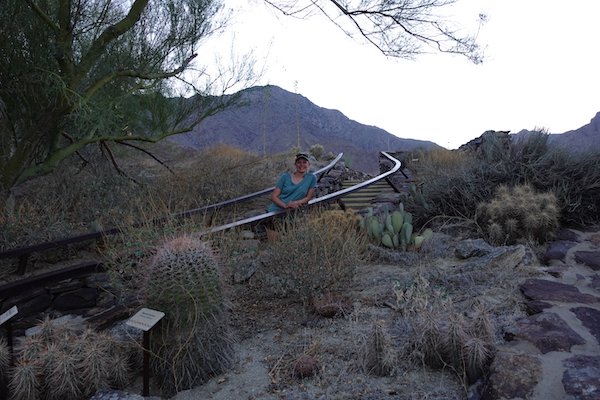 The desert wasn’t merely hot; it was incredibly still and quiet. We thoroughly enjoyed the feeling of tranquility and calmness as we hunted for cactus varieties and caught glimpses of coyotes and desert cottontails.

If you visit the Anza Borrego in February and March, you will be treated to one of America’s best wildflower blooms as the entire desert turns into a magnificent carpet of color. When we visited in June, the wildflowers were gone, but cactuses (or cacti) abounded. We couldn’t get over the variety within cactuses!

Did you know? There are approximately 1750 species of cactus, and most are native to North and South America.

When people think of deserts, they immediately picture cactuses—and for good reason! These plants are specially designed by God with the features they need to thrive in a dry climate. Before the global flood, there likely weren’t deserts as extreme as those we have today, but the genetic diversity within cactuses allowed them to adapt to our changing world and thrive even in very dry places.

Here are a few of their design features:

And those are just a few of the design features God gave cactuses to enable them to thrive in a desert climate!

Now What About Those Spines?

But what about the most obvious of all their features? Those spiky spines that you have to avoid! Well, we know cactuses didn’t have those in God’s “very good” creation. It wasn’t until after Adam and Eve sinned that God cursed the ground and said, “thorns and thistles it shall bring forth for you” (Genesis 3:18). Those sharp spines are a result of living in a fallen world. But they highlight the Creator’s compassion towards what he’s made because cactuses use those spines to help them survive in the desert.

You might think those spines (which are highly modified leaves) are just to protect the cactus from being a snack, but that’s only part of the story. They also serve as “sunblock” for the cactus. The hot desert sun could cook a cactus, but the large number of spines (which grow in clusters from organs called areoles, a distinguishing characteristic for the plant) provide shade and have a cooling and often a reflective effect, keeping the plant from sunburn and, again, you guessed it, dehydration.

The spines also help break up the airflow around a cactus, which works as an insulation (remember, the desert changes temperature dramatically once the sun goes down!) and, yet again, protects against evaporation.

But the spines don’t just protect against water loss. They also help the plant to collect water! If it rains, or if fog or mist rolls in from the mountains, the spines collect some of that moisture, and it travels to the base of the plant, where the shallow roots suck it up.

And that’s just scratching the surface of how amazing cactuses are!

The cactus family is amazing and very different from other plants. It didn’t evolve over time—it was created by God with the genetic information for all the special adaptations that allow it to thrive in an area where few plants can.

Well, we’re off on another adventure. Until next time, as you think about the spiny cactus or whatever plants are native to where you live, remember how God cares for the plants—and how much more he cares for you! “And he said to his disciples, ‘Therefore I tell you, do not be anxious about your life, what you will eat, nor about your body, what you will put on…Consider the lilies, how they grow: they neither toil nor spin, yet I tell you, even Solomon in all his glory was not arrayed like one of these. But if God so clothes the grass, which is alive in the field today, and tomorrow is thrown into the oven, how much more will he clothe you, O you of little faith!’” (Luke 12:22, 27–28)