Dinosaur fossils have been found on every continent. From Tarbosaurus in eastern Asia, to the massive Argentinosaurus in South America. But what about Antarctica—that frozen continent covering the south pole? Have dinosaurs really been found there?

Well, the answer to that question . . . is yes! In fact, quite an astounding number of fossilized remains of both plants and animals (including dinosaurs) have been found at the bottom of the world.

Let’s start our cool journey with some history. Antarctica has been the subject of many grand expeditions. In fact, as far back as the 1800s, brave men began to explore this otherwise untouched land, many hoping to make a name for themselves and their country. However, in the 1900s, the reason for these explorations began to take on a more scientific aspect, particularly after a series of thrilling expeditions with exciting finds.

The first fossils ever discovered in Antarctica were found by an American artist by the name of Frank W. Stokes. Stokes was part of a Swedish Antarctic expedition and discovered the fossils in 1902. These first fossils included ammonites, bivalves (mussels, clams, etc.), and crustaceans (crabs, lobsters, etc.).

Later, in 1910, Captain Robert Scott, who had already taken part in the Discovery expedition (which discovered the longest river in Antarctica), led an operation called the Terra Nova expedition. This journey, however, would be his last. In 1912, a search party found Captain Scott’s last camp and the frozen bodies of Scott and two of his companions. Also at their camp, however, was close to forty pounds of recovered fossils that had been discovered by Scott and his team. Among the fossils recovered were parts of an extinct Glossopteris tree that is also found in New Zealand, Australia, Africa, and India. This would make sense since the Bible describes in Genesis 1:9–10 that before the global flood of Noah’s day, all land was gathered together into one large land mass. Therefore, Antarctica was not always at the bottom of the globe but would have been farther north and connected to the rest of the land. This explains the many similar plants and animals that we find fossilized on different continents.

Since those early expeditions, many new paleontological discoveries have been made. Some of the animals that lived alongside the dinosaurs we find in Antarctica include the mid-size mosasaur (a type of marine reptile) called Taniwhasaurus. These animals’ fossils have also been found in New Zealand and Japan. Another was a massive amphibian called Antarctosuchus. This giant salamander could possibly have reached lengths of up to six and a half feet!

But what about the dinosaurs? What types have been found in Antarctica? That’s what we’ll spend the next few months taking a closer look at. But to start us off, this first dinosaur is not only the first dinosaur found in Antarctica, but it literally has this claim to fame in its name. Introducing . . . Antarctopelta. This small dinosaur, whose name means “Antarctic shield” is a type of nodosaur. Nodosaurs were similar to the more well-known ankylosaurs but were very different from them. In general, they were smaller; had narrower skulls and sharper, more spike-like armor; and most notably, they lacked the prominent clubbed tails that the ankylosaurs are famous for.

Though only a partial skeleton has been found, based on this fragmentary evidence, Antarctopelta is estimated to have been around 13 feet long and close to 3 feet (one meter) tall.

What parts of the skeleton have actually been found though? These first dinosaur fossils were found on James Ross Island in 1986, and unfortunately most of the animal was not recovered. The bones that were recovered are not in the best condition due to years of having been exposed to the elements before being fully excavated. Only 15% of the dinosaur was recovered—some teeth, skull fragments, partial limb bones, vertebrae (bones that make up the spinal column or backbone), a few toe bones, and various bits of the animal’s bony armor called osteoderms. Reconstructions of this animal are mostly based on the skeletons of other nodosaurs.

Though not much of the skeleton was recovered, it was hard-won, as it took nearly a decade of return expeditions to fully excavate the specimen due to the frozen nature of the ground as well as harsh weather conditions.

Be sure to come back next month for part two of this chilling series! 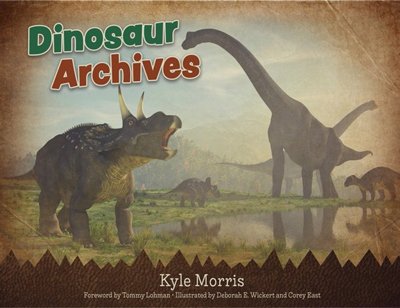 If you want to dive deeper into the world of dinosaurs, ask your parents to help you check out my new book, Dinosaur Archives,1 on the Answers in Genesis online store!