The Seven C's of History: Catastrophe!

‘The Seven Cs’ of History (Creation, Corruption, Catastrophe, Confusion, Christ, Cross, Consummation) help us remember the big events which have affected, and will affect, the history of the universe.

‘And every living thing which was on the face of the earth was destroyed, from man to cattle, and to the creeping things, and the fowls of the heavens. And they were destroyed from the earth, and only Noah was left, and those that were with him in the ark’ (Genesis 7:23).

God created a perfect world in six normal-length days (Genesis 1, 2), but Adam disobeyed God’s command not to eat the forbidden fruit, and brought corruption and death into the world (Romans 5:12). Adam’s sin passed to his children, his children’s children and so on. This brings us to the third ‘C’ of history found in Genesis 6–9 . . . 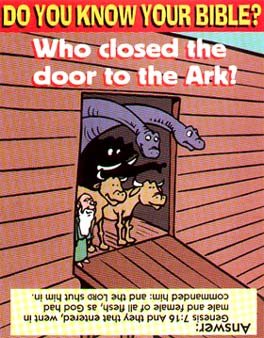 Because their hearts were wicked, though, they did things that displeased their Creator, including much violence. They didn’t listen to their ancestor Adam as he told them what had happened in the Garden of Eden and how they needed to obey and worship only the Lord. This grieved God so much that He decided to destroy all people, as well as all land-dwelling creatures with the ‘breath of life’ in them. Only one man, Noah, found favour in His eyes. God told Noah that He would send a great Flood to judge the entire globe by covering it with water.

Lions and tigers and … dinosaurs

Because the Creator knew Noah was a righteous man, God provided a way for him, his wife, his three sons, their wives, the land animals and birds to survive this catastrophe by building an Ark. (The fish and other sea creatures could survive in the water, while plants and insects could survive on floating debris). Noah and his family worked on the Ark for many years, warning those around them that God’s judgment was coming (2 Peter 2:5). No one but his family believed. When they finished building, God brought two of every animal (including dinosaurs!), and seven of some, to the Ark.

And the rains came down …

After all were on board, water burst forth from deep inside the earth (‘all the fountains of the great deep were broken up’), and it began to rain heavily. These provided the water that would cover the whole earth.

We’ve all seen the damage a local flood can do — ripping up trees, depositing layers of mud, destroying everything in its path. Now imagine the damage done by a flood covering the entire planet!

Nothing would be the same when the waters had subsided and the earth had dried. How strange everything must have looked to Noah and his family as they came off the Ark!

After leaving the Ark, Noah built an altar to the Lord, sacrificing one of each of the clean animals. The Lord saw the sacrifice, and promised never to flood the entire earth again. The sign of this promise is the rainbow. 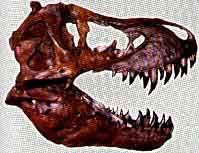 Some scientists spend their whole lives studying the petrified remains of dead things (fossils) to try to understand what life was like in the past. This can be a fascinating job as these ‘paleontologists’ seek to determine when the animals (or plants, etc.) died, what they looked like while they were alive, how they moved, what they ate . . . . Each paleontologist looks at a fossil with certain ideas about what the past was like. In fact, we all do!

For instance, take a look at the fossil at the right. Now take a moment and write down, say, five things you know about that fossil.

Perhaps you said ‘It’s millions of years old’, or ‘it took a long time to form’. Now think about what you’ve written for a moment — do you really know these things, or are they just your ideas about the fossil? How do you know how old the fossil is, or how long it took for the animal to be fossilized? It’s important, as Christians, that our ideas about the past are based on what the Bible tells us has happened. Using the Bible’s true record of history to help us understand, we might say the following things about this fossil:

These are just a few things we can learn from the Bible about this fossil!

Studying the fossils you find (maybe even in your own backyard!) can be exciting, but it’s important to know the difference between what we actually find and what others may say about our findings. Since God’s Word gives us the history of the world, we need to apply this to fossils as well.

Thats not the ark … THIS is the ARK! 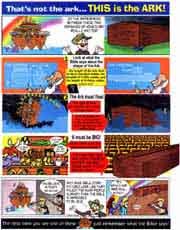 Water covers 70% of the earth's surface? Yet many deny the earth was completely covered in water at one time. Did you also know … no (liquid) water has been found on Mars? Yet many believe water shaped the surface of the Red Planet (Mars) in the past. Why would people deny a huge flood on Earth and promote one on Mars?

2 Peter 3:5-6 reminds us, 'For this is hidden from them by their willing it, that … the world that then was, being flooded by water, perished.'

Let there be FUN!

All aboard Noah's Ark? 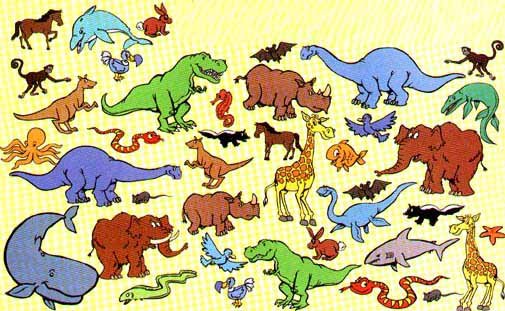