Narwhals, the “unicorns of the sea,” are toothed whales found in Arctic waters. Their most recognizable feature is a long tusk. This “tusk” is actually a tooth that grows in a spiral pattern through a hole in their lip. It can grow over ten feet long in males! Female tusks are much smaller, and many females don’t even have a tusk. Narwhal tusks used to be sold for a small fortune as unicorn horns. No one is quite sure what the narwhal uses its tusk for, but it might be used to attract or fight for a mate.

Narwhals are usually found in groups, called pods, of 20–30 whales, but sometimes there can be hundreds or even thousands swimming together. During the summer they live near the coast, but when winter comes they hunt under and around the sea ice, breathing through cracks in the ice. They can dive over 5,000 feet.

Narwhal predators include polar bears, killer whales, humans, and maybe even walruses. Native peoples in the Arctic eat narwhal skin as a high source of vitamin C and feed the meat to their sled dogs.

Here are some fun facts about the narwhal: 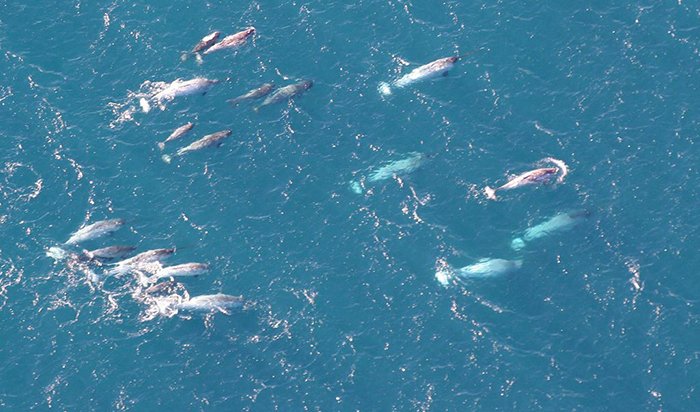 A pod of narwhals off Greenland. Note the long single tusks on many of these small whales.

Did Narwhals Inspire Stories of Unicorns?

Some people believe narwhals inspired stories about the unicorn. But it’s much more likely that the historical unicorn (not the mythical creature we think of today) was a land animal, not a whale. Unicorn probably referred to an extinct species of rhinoceros.

Some narwhals have two tusks.