Manta Ray: Superhero of the Sea

What has a wingspan of over 29 feet, swims 24 hours a day, and can leap higher than 6 feet in a single bound? 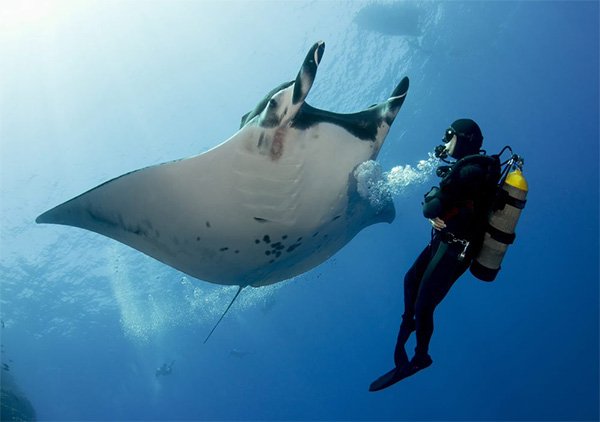 Each manta has a pattern of spots on its stomach. Scientists say this pattern is unique to each manta ray—like your fingerprints are unique to you.

In many ways, this animal is a real-life superhero of the sea. The manta ray’s super smarts, amazing swimming abilities, and fantastic gymnastic skills make it a fascinating creature to study. The manta ray seems out of this world. But its “superpowers” showcase how our all-powerful Creator God provides for his creatures.

A key sign of an animal’s intelligence is the size of its brain compared to the size of its body. Elephants and dolphins are both known for having bulky brains (and for putting them to good use). But the manta ray is in a class of its own. The manta holds the record among cold-blooded fish for having the largest brain for its body size. Our brainy buddy’s super smarts help it learn, play, and problem-solve. With this in mind, it’s easier to forgive our manta friend for having a big head. 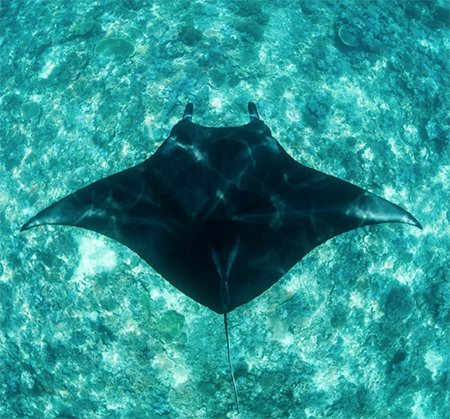 The word manta comes from the Spanish word meaning mantle or cloak. Both words refer to types of capes. The name manta not only refers to the perfect accessory for an undersea superhero, but also perfectly describes these wing-finned wonders.

If someone asked you who you see when you look in the mirror, you would probably think they were crazy. Of course you see you! This ability to recognize yourself is called self-awareness. But for animals without self-awareness, reflections can be very confusing. For example, when a betta (BAY-tah) fish sees its own reflection in a glass fishbowl, it thinks the reflection is another fish and tries to fight it. Its confusion can lead to injury—or even death. This aggressive behavior is a sad side effect of the fall.

Testing an animal’s self-awareness often helps us understand its intelligence. Asian elephants, gorillas, bottlenose dolphins, and orcas are some of the few animals that have passed this test with flying colors. Manta rays seem to have an impressive amount of self-awareness. When a manta sees itself in the mirror, it seems to know that it is looking at its own reflection and not at another ray. Mantas sometimes even perform flips or blow bubbles at their reflections!

Do you ever wake up in the morning and wish you could just stay in bed? When you are buried deep in a cocoon of cozy blankets, it can be hard to get going. But the manta ray never has this problem. Its life depends on motion.

As a manta swims forward, oxygen-filled water rushes over its gills. The oxygen stays inside the manta’s body for breathing, and the water filters out underneath the manta’s body through openings called “gill slits.” If the manta ever stopped swimming, it wouldn’t be able to breathe. This means the manta ray never stops moving—not even to sleep.

Mantas are also famous for their gymnastics. Manta rays often leap out of the water and perform backflips. This behavior is known as “breaching.” Mantas can reach amazing heights when breaching—sometimes over six feet above the water! This ability, combined with the flapping of their wing-like fins, has earned manta rays the nickname “flying rays.”

The manta, like its relative the stingray, is very docile—it’s gentle and friendly to humans. Though mantas can be breathtakingly large, they do not have sharp, poisonous stingers like stingrays do. Their mouths may be enormous, but they don’t have sharp teeth. Instead, they have a rough-textured “tooth band” inside their mouths on the underside of their jaws. They cannot use this band to attack prey the way a shark uses its rows of sharp teeth. Instead, mantas eat things small enough to swallow whole, such as plankton, shrimp, and small fish.

Many people travel miles from home to places such as Mexico, Hawaii, and Thailand just to swim with a friendly manta ray. And it’s no wonder! Mantas are super smart, super cool, and a super example of God’s amazing design.

Dive into These Magnificent Manta Facts

All Aboard the Ark 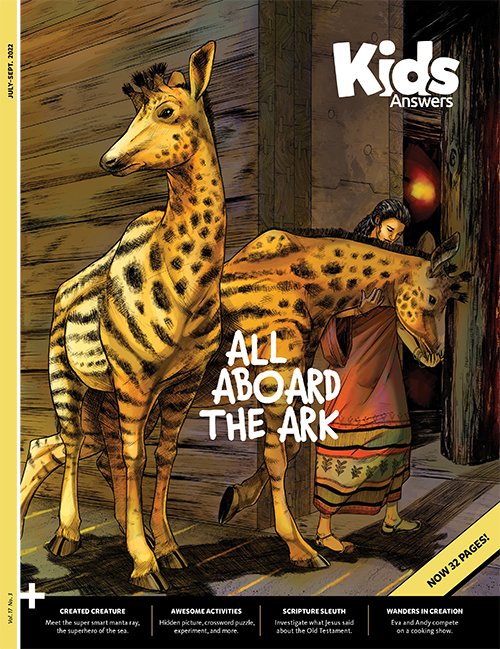 The ark was a real rescue ship that God used to save Noah, his family, and the animals from the flood.