The box jellyfish is able to see through four sets of eyes! 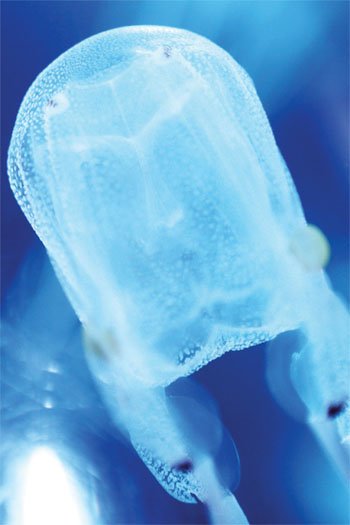 The box jellyfish is able to see through four sets of eyes, one at the center of each side of the bell, each set clustered in a club-shaped structure called the rhopalium. Each set actually consists of six eyes: four simple pigmented pits with photoreceptors and two complex camera eyes, one pointing up and one pointing down, each with a cornea, lens, and retina. Scientists are not sure how the animal processes the visual information since it has no brain. Certainly, God designed this “primitive” animal with amazing capabilities that defy any evolutionary explanation.

Size: Up to 10 in (25 cm); tentacles up to 10 ft (3 m)
Depth: Near the surface
Diet: Shrimp and small fish
Habitat: Open tropical waters of southwest Pacific and eastern Indian Oceans