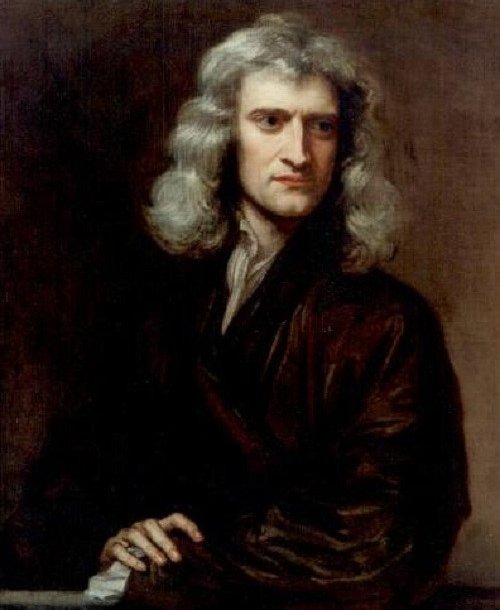 Photo of a painting by Godfrey Kneller [Public domain], via Wikimedia Commons

Isaac Newton is one of the most famous scientists of all time. Many scholars even consider him the greatest scientist who ever lived, but they often refuse to talk about his faith. He believed in divine creation and wrote strong articles opposing atheism and defending the Bible.

Isaac Newton was born in England in 1642. As a young boy, he enjoyed reading the Bible and making models of things like windmills and carts instead of playing outside games with other boys his age.

Newton went to school at King’s College in Grantham. When he was 14, he was taken out of school to help run his family’s farm. He missed his studies, and his mother recognized that he was longing to go back to school. King’s College offered to let Newton attend the school without paying tuition because of his poor circumstances and remarkable ability, so he returned to his schooling. His teachers and fellow students were impressed with his knowledge of the Bible.

After finishing his schooling at King’s College, Newton attended Trinity College at Cambridge University to become a minister. At the time, scientific discoveries were mostly ignored. This annoyed Newton, who believed ideas in science should be tested and accepted if their usefulness could be proven. He devoted his research to experimenting.

Newton theorized that white light was made up of all other colors, and that light was composed of particles. He designed a telescope to study optics, or the behavior of light, and proved his theory of light and color. In Newton’s time, lenses in telescopes broke some of the light into other colors, making the view unclear. Newton was the first to create a telescope using a curved mirror instead of a lens.

After Newton graduated in 1665, the Black Death swept across Europe, causing the schools to close. During that time, Newton returned to his family farm to study light and color, the laws of motion and gravity, and the laws of planetary motion.

In 1687, Newton published The Philosophiae Naturalis Principia Mathematica. It was the result of over 20 years of study, and it took him two years to write. It discussed his theory of calculus, the three laws of motion, and his theory of gravity. The book was a massive success, and a big part of Newton’s fame to this day. He later published another book, Optiks, which contained his earlier work on light.

Isaac Newton did more than establish the theories of gravity, light, and calculus, and the laws of motion. He also wrote strong papers in support of the Bible, including several on divine creation in Genesis. He once said, “We account the Scriptures of God to be the most sublime philosophy. I find more sure marks of authenticity in the Bible than in any profane history whatsoever.”

Newton often faced strong opposition from rivals or the government. He even had a nervous breakdown, an illness of the mind, possibly due to working long hours and enduring a lot of stress. Through such trials, he became even closer to God. He even stated, “Trials are medicines which our gracious and wise physician gives because we need them. . . . Let us trust his skill and thank him for the prescription.”

All material Things seem to have been composed of the hard and solid Particles . . . variously associated with the first Creation by the Counsel of an intelligent Agent. For it became him who created them to set them in order: and if he did so, it is unphilosophical to seek for any other Origin of the World, or to pretend that it might arise out of a Chaos by the mere Laws of Nature.
—Sir Isaac Newton
From Opticks (1704, 2nd ed., 1718), 377-378.

And from true lordship it follows that the true God is living, intelligent, and powerful; from the other perfections, that he is supreme, or supremely perfect. He is eternal and infinite, omnipotent and omniscient; that is, he endures from eternity to eternity; and he is present from infinity to infinity; he rules all things, and he knows all things that happen or can happen.
—Sir Isaac Newton
The Principia: Mathematical Principles of Natural Philosophy (1687), 3rd edition (1726), trans. I. Bernard Cohen and Anne Whitman (1999), General Scholium, 941.

He rules all things, not as the world soul but as the lord of all. And because of his dominion he is called Lord God Pantokrator. For 'god' is a relative word and has reference to servants, and godhood is the lordship of God, not over his own body as is supposed by those for whom God is the world soul, but over servants. The supreme God is an eternal, infinite, and absolutely perfect being; but a being, however perfect, without dominion is not the Lord God.
—Sir Isaac Newton
The Principia: Mathematical Principles of Natural Philosophy (1687), 3rd edition (1726), trans. I. Bernard Cohen and Anne Whitman (1999), General Scholium, 940-1.