George Washington Carver: A Scientist You Can Go Nutty Over! 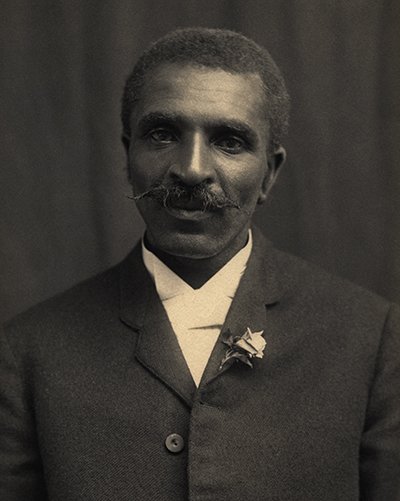 George Washington Carver was an incredible inventor and a man of God. He is most famous for the invention of peanut products and for teaching farmers the concept of crop rotation.

Carver was born a slave, but he was adopted by the couple who ran the plantation. Certain colleges would not accept him since he was African American, so God guided him to Simpson College in Iowa. From there he went to Iowa State University and obtained a bachelor of science and his master’s degree in botany. After getting his master’s degree, he returned to the South to teach and help the farmers there. The farmers at the time had a big problem: the main crop they produced was cotton, but planting cotton over the years had removed important nutrients from the soil. Carver taught the farmers how to use crop rotation, telling them that they should plant cotton one year and plants like soybeans, peanuts, or sweet potatoes the next. This helped the soil keep the nutrients it needed.

Because the farmers were planting new crops, Carver invented hundreds of new uses for those crops. He discovered sweet potatoes could be used to make glue, vinegar, shoe polish, and many other things. While Carver was thinking up uses for the peanut, he popularized the use of peanut butter! He found many other uses for the peanut, such as ink, shampoo, car fuel, peanut oil, shaving cream, and more.

Carver wasn’t interested in making money. He didn’t even patent most of his inventions because he wanted the glory to go to God and because he believed that everyone should be able to use the products he developed. Carver once said, “The Lord has guided me. He has shown me the way, just as He will show everyone who turns to Him.” George Washington Carver is a shining example of a Christian scientist who changed the world for the better.