What About Those Embryos?

Although most museums now recognize that the human embryo does not pass through various evolutionary stages (known as embryonic recapitulation, or the biogenetic law, which was based on fraudulent drawings by the nineteenth century German evolutionist, Ernst Haeckel), they may continue to cite embryonic homology as evidence of evolution. This is the idea that embryos look similar at early stages and is based on drawings published by Haeckel in 1866. The London Science Museum states on its website:

The embryos of vertebrates (animals with backbones) pass through a common stage early in their development. At this stage they show strong similarities, although the animals come to be as different as a human and a cat. This happens as their body plans are being laid down. It seems that an efficient way of marking out the body plan arose millions of years ago, and has remained virtually unchanged throughout animal evolution. (//www.sciencemuseum.org.uk/WhoAmI/FindOutMore/Yourbody/Howdoyoubecomeyou/ Howdoestheembryodevelop/Spotthedifference.aspx)

However, this idea of similarity is now known to be false. Evolutionist Michael Richardson experimentally showed in 1997 that embryos of various creatures do not look the same (Michael Richardson. et al., Anatomy and Embryology, 196:2, pp. 91–106). In fact, Haeckel’s drawings were complete fabrications. Richardson stated:

This is one of the worst cases of scientific fraud. It’s shocking to find that somebody one thought was a great scientist was deliberately misleading. It makes me angry. What he [Haeckel] did was to take a human embryo and copy it, pretending that the salamander and the pig and all the others looked the same at the same stage of development. They don’t. These are fakes. (Interview with Nigel Hawkes, The Times, London, August 11, 1997, p. 14)

Richardson found that Haeckel added, omitted, and changed features, and he also fudged the scale to exaggerate similarities among species, even when there were 10-fold differences in size. Haeckel further blurred differences by neglecting to name the species in most cases, as if one representative was accurate for an entire group of animals. (Elizabeth Pennisi, “Haeckel’s Embryos: Fraud Rediscovered,” Science 277:5331, September 5, 1997, p. 1,435.) If the museum’s illustrations are drawings, they are most likely based on Haeckel’s fake drawings, which are completely out of touch with reality. However, if the museum’s illustrations are actual photos, notice that the embryos really don’t look alike. 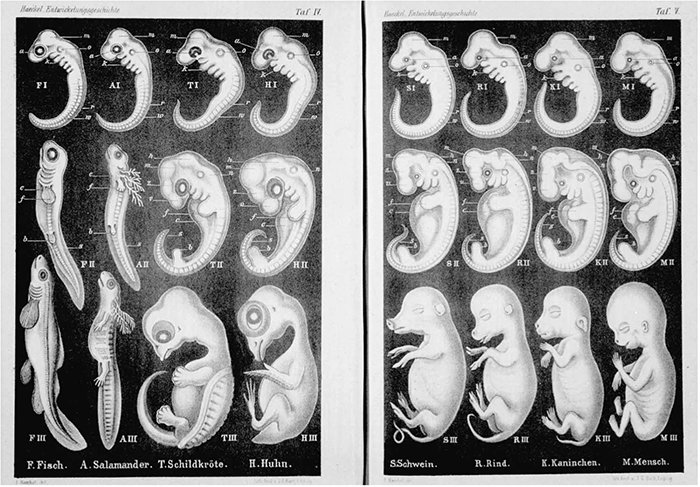 Lithograph by J. G. Bach of Leipzig of fraudulent drawings by Haeckel, from Anthropogenie published by Engelmann

Let There Be Truth: Sanctity of Life