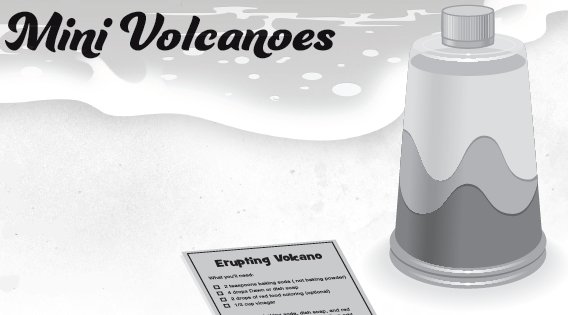 The world before the Flood and the world after the Flood looked very different. The Flood changed the earth in big ways! Read Genesis 7:11. Scripture tells us that “the fountains of the deep broke up.” What do you think that means? Take responses. The earth’s crust, way down deep, was breaking apart, and water was bursting out. As the earth’s crust was breaking up, it was forming volcanoes! Those volcanoes that formed during the Flood would later change the whole look of the earth!

When a volcano erupts, what is it that comes out of it? Take responses. Lava! Beneath the surface of the earth flows magma (a hot rock substance). Once the magma flows out of a volcano, it changes and is now called lava. Lava is extremely hot—1,292 to 2,192 degrees Fahrenheit (700 to 1,200 degrees Celsius)! Not something you would want to be caught in! Because of its temperature, it is very destructive—everything caught in its path is destroyed. When you picture a volcano erupting, do you imagine really fast flowing lava destroying everything caught in its path because there is no way for anything to escape? Take responses. Believe it or not, most lava actually flows no more than 5 miles (8 km) per hour. That is slow enough that you could walk or jog to safety.

Let’s do an experiment to show us the lava flowing out of a volcano!

Note: At this point, you'll demonstrate the mini volcanoes. A little later, they will each make their own mini volcano to take home.

Each group (table) should have a sample mini volcano. First, remove the bottle cap. Then, using a funnel, drop 2 tsp. of baking soda into the bottle. Next, add 4 drops of dish soap and then 2 drops of red food coloring. Finally, pour in a 1/2 cup of vinegar and watch it erupt!

When a volcano erupts, the magma becomes lava. When that lava cools, wind and rain break it down into fertile soil. And what is made out of soil? Land! New land is born! In fact, some of the islands of Hawaii are constantly getting larger thanks to lava flows!

So think back to the Flood. The volcanoes were formed by the earth’s crust breaking up and pushing around and the tectonic plates shifting. This pushing of the ground resulted in volcanoes. When those volcanoes erupted, the lava moved slowly, eventually forming new land. Some of the land we have today is partially a result of the volcano eruptions of the Flood of Noah’s day! And the volcanoes we have today are remnants from that catastrophic event! Now let's make your own mini volcano to take home.

Pass out the Flood Legend card for today and remind children that the flood legends found around the world are remnants of the true account given in the Bible.