How to Read a “Family Tree”

Most museums feature charts that illustrate the alleged evolutionary lineage of the animal in question—birds, dinosaurs, reptiles, humans, etc. These “family trees” are supposed to show how the group of organisms has developed (evolved) over time from a common ancestor. These charts have been constructed based on fossil evidence, although more recently DNA and molecular studies have come into play.

In a fascinatingly frank observation, one evolutionist admits the truth about the fossil record and the evolutionary relationships that have been built on it:

Remember that although a living individual must have had ancestors, fossils are unlikely to represent any of them. Even if a fossil was an ancestor, we will never know this—we can never know with certainty what happened in the past. Accepting that fossils are not ancestors also means that there are no “missing links” in the fossil record because fossils cannot be ordered, as traditionally depicted, into an evolutionary lineage. There is no ladder of life. Most, if not all, fossils lie on the dead branches of the tree of life, and we must remember that most of our tree of life is dead, with only a few green living leaves at the tips of the branches. (D.M. Irwin, “Dead branches on the tree of life,” Nature 403, 2000, p, 480.)

Remember, fossils don’t speak for themselves; they must be interpreted. The lines leading to the various branches on the tree represent the interpretation. The actual fossil evidence is usually pictured at the end of the branches.

When viewing a family tree, it’s helpful to disregard the lines (dotted or otherwise) leading to animals. If the museum has any honesty at all, the actual fossil evidence will be shown in bars or different colored lines compared to the imaginary branches. Once these imaginary interpretations of the evidence are eliminated, it becomes much easier to view the animals as representatives of different created kinds that were buried at various stages during the Flood (or in post-Flood localized catastrophes), rather than as a showcase of onward-upward evolution. 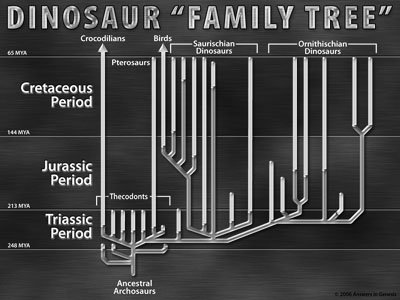 Did Dinosaurs Turn into Birds?

PDF Download
Previous Article A Common Ancestor Isn’t the Answer Next Article How Important Is Evolution to Science?