Stars change to some extent, but not over billions of years. Some stars spontaneously change brightness. Others explode. These are things that scientists have been able to observe. However, scientists do not observe star formation, nor the secular stellar evolution cycle that is taught in so many textbooks and museums.

Some of what astronomers describe as “stellar evolution” does take place. However, the process is misnamed, and parts of it are questionable. According to this theory, the life of a star is said to begin with the collapse of a gas cloud—a doubtful beginning. Bypassing this fundamental origin problem, a young star is said to begin in the “main sequence” category. These are average stars with a stable light output. The great majority of stars are in the main sequence, including our sun. When a star’s hydrogen fuel runs low, it becomes a red giant or super-giant star. Such a star has expanded hundreds of times in size and has become somewhat cooler. Red giants include Betelgeuse and Aldebaran.

Next, the star may either explode as a supernova or may slowly collapse into a small, hot white dwarf star. The companion star circling Sirius is such a dwarf. Such stars are said to be very old.

Notice that the entire life of a star is an aging process: main sequence-red giant-white dwarf. Instead of stellar evolution, it might better be called stellar decay, degradation, or degeneration. Computer studies conclude that each stage of a star lasts for millions or billions of years (depending on the star’s mass), but in the recent-creation view, there has not been enough time for such change. And some observed star changes appear to be much more rapid than computer models suggest! For example, there is evidence that the dwarf companion of Sirius formed from a red giant in just 1,000 years. Other stars have also shown unexpected color changes, indicating that the aging process of some stars may be much more rapid than generally believed. Most stars have probably not changed substantially in appearance since the creation described in Genesis. The sun has certainly remained as a faithful “main sequence” star from the beginning. Since all the stars were made on the fourth day (Gen. 1:16–19), they are all actually the same age. From the beginning they have differed from each other in color and brightness— ”in splendor” (1 Cor. 15:41). 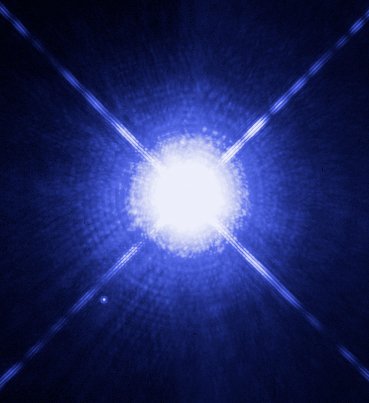 This image of Sirius A and Sirius B was taken by the Hubble telescope. Sirius A is the large, bright star (in the center), while Sirius B (below and to the left) is a much smaller white dwarf.