The Arctic Ocean is the smallest ocean on earth. It is less than 20% the size of the next smallest ocean (the Indian Ocean). It is also almost completely surrounded by land, with Norway, Russia, Canada, Alaska, and Greenland closing it in.

The Arctic Ocean is covered in ice for much of the year. In fact it has occasionally been frozen enough that snowmobiles or dog sleds could cross it. Above the 75° N latitude, the ice almost never melts. Because of this thick ice cover, the North Pole wasn’t reached by boat until 1958. But during the summer each year, about 50% of the ice melts, and in recent years better technology has enabled more people to reach the North Pole. In fact, only a few miles from the North Pole, a Russian scientific research station is set up every year on the ice. Tour groups are allowed to land there and take trips to the North Pole by helicopter.

The Arctic Ocean is home to many species of marine mammals, including walruses, seals, whales, and narwhals. The polar bear also inhabits this region, swimming to large ice packs in search of its favorite food—seals. 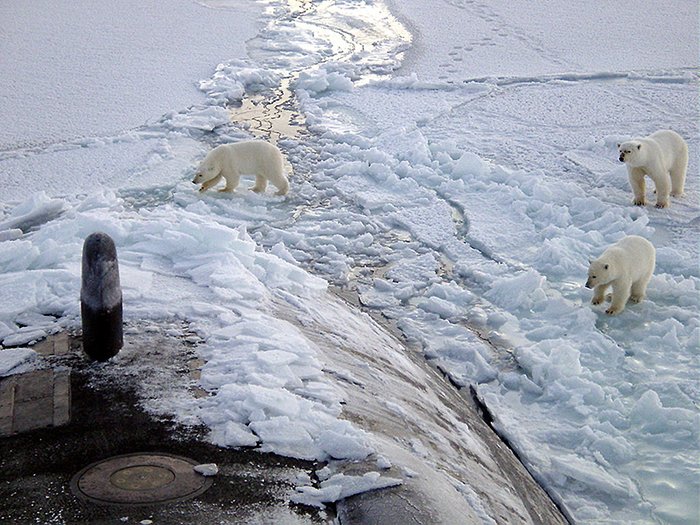 Three Polar bears approach the starboard bow of the Los Angeles-class submarine USS Honolulu (SSN 718) while surfaced in the Arctic Ocean 280 miles from the North Pole.

Fun Facts About the Arctic Ocean