In this Greek flood legend, a man named Deucalion was warned by his father, the titan Prometheus, that a flood was coming. So he built an ark shaped like a chest and filled it with food and other provisions to survive the coming flood. The Greek god Zeus was sending the flood to punish all of mankind for its wickedness. Zeus, with the help of his brother Poseidon, caused the ocean and river waters to overflow the entire earth. The people who didn’t die right away in the flood because they were clinging to floating wood or debris eventually starved to death.1 Deucalion and his wife (and cousin) Pyrrha survived for nine days of flooding before landing at Mt. Parnassus. Since they were now all alone in the world, they were sad. 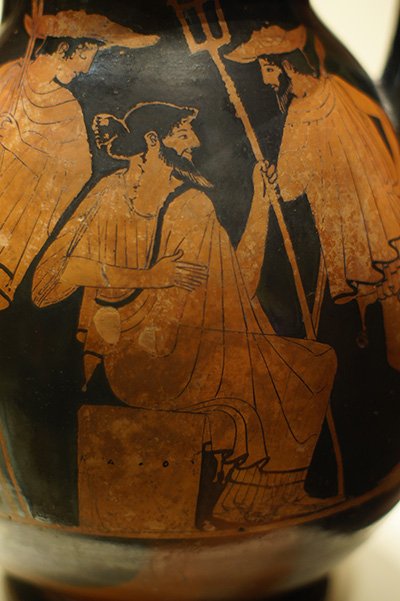 By alijava, via Wikimedia Commons

Greek storage jar with an image of Poseidon (center), circa 470 BC in Athens

On Mt. Parnassus they then went to visit the Greek goddess Themis who told them to throw the bones of their mother behind them. They didn’t know what this meant at first, but then they realized this meant to "throw Mother Earth’s stones over their shoulders onto the ground." So they did this. The stones Deucalion threw behind him became men, and those Pyrrha threw became women.2 Strangely, this flood legend doesn’t say anything about saving the animals. They just sprang up out of the ground after the Flood as the sun warmed the moist earth.3

So how does this flood legend compare to the Bible? In this Greek version, Zeus is angry with people for their wickedness, but is not powerful enough to accomplish his goal of sending a flood without asking his brother for help. Even though he’s only angry with humans, he kills all the animals and provides no way for them to survive. Zeus also wants to totally wipe out people and not save anyone, but another minor god (Prometheus) sneaks behind Zeus’ back to warn Deucalion and Pyrrha of the upcoming Flood.

In the Bible, God Himself warns Noah of the coming Flood, which He sent because of mankind’s great sin. God tells Noah to make a way of escape for himself, his family, and the land animals. God alone sends the Flood, and He alone stops it. He also remembers Noah’s family and all the animals on the Ark and commands them to go fill the earth and spread out on it after the Flood. In the Greek story, Zeus had no mercy for humans or the animals, but in the Bible the Flood reminds us of God’s judgment, but also of God’s mercy and concern for the people and animals in the Ark.