The walrus is known for its large size and pink–reddish brown coloring. It is also easily recognized by its large tusks. 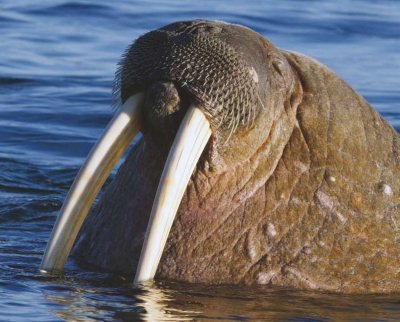 The thick, wrinkled skin of the walrus acts as a protective barrier when it fights with other walruses and when it is attacked by predators. The walrus also has a thick layer of blubber under its skin that protects it from the freezing water. When the temperature drops, the walrus’ blood vessels get smaller. This helps it deal with the changing temperatures in its habitat.

Habitat: Open waters of the Arctic Ocean near the edge of the polar ice in Northeast Siberia, Northwest Alaska, Greenland, and Ellesmere Island