A. J. T. Johnsingh, WWF-India and NCF via Wikimedia Commons

One of the most incredibly designed creatures in the world is the pangolin of Asia and Africa. Because they are rarely seen in zoos, many people don’t know what they are. Because some nations view their scales as medicinal, pangolins have been hunted heavily and are now some of the rarer species of animals in the world. 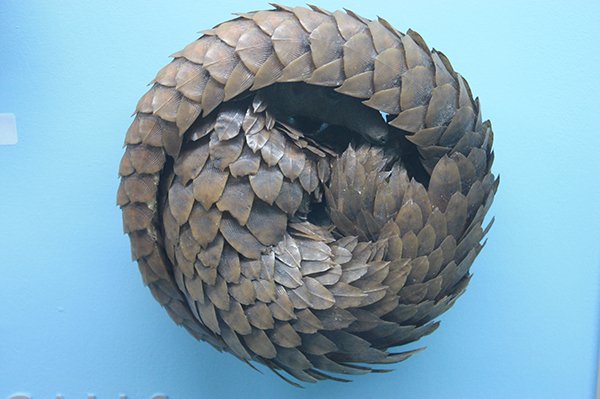 A pangolin in defensive posture, Horniman Museum and Gardens, London

The pangolin is clearly designed. Their tongue is attached deep in the chest cavity rather than at the back of the mouth, and is coated with a sticky saliva which causes insect prey to be trapped on it. This raises problems for the evolutionist, who cannot explain how pangolins evolved. Anteaters and woodpeckers use a similar mechanism but are considered evolutionarily unrelated, so the sticky tongue would have had to evolve separately on at least two other occasions. What mindless chance process produced a tongue that was sticky, but was somehow smart enough to realize that it would be unusable if it were stuck to the roof of its mouth? To do what a pangolin does requires a specialized set of tools. We know this because we see the same set of tools on anteaters which live a similar lifestyle. The pangolin comes with all the needed equipment. It has strong digging muscles, sharp claws, a sticky tongue, and an incredibly strong sense of smell. All four of those are needed for the pangolin to survive. They could not have evolved gradually over long periods of time.