The polar bears are known for what appears to be their pure white fur and its massive size. Polar bears are the largest of the bear kind. 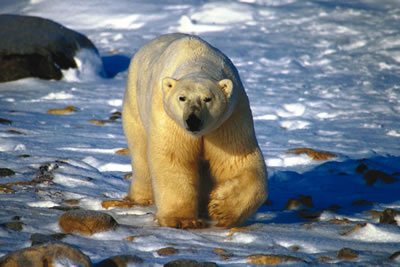 The polar bear is a smart hunter. It will spend hours beside the breathing hole of a seal in the ice. When the seal emerges for air, the polar bear will use its claws to grab the seal. This instinct came into play after the Fall. The paws of the polar bear are uniquely adapted for its life on snow and ice. The fur helps it grip the ice, and the partial webbing between the toes aids in swimming.

Habitat: Tundra and sea ice in Arctic regions of the Northern Hemisphere