Arabian camels are one of two species of camel. Arabian camels are the species with one hump. The hump stores fat, which the camel can use for both energy and water on long journeys across the desert. Since camels almost never sweat, they do not lose water quickly, further equipping them for life in the desert. However, they have other design features for their life, such as sturdy footpads to help them walk on sand. They can close their noses to keep sand out as well. They have thick lips, designed for dealing with thorny desert plants. They live in herds of around twenty other camels, led by a dominant male. They can run over forty miles an hour at sprint! 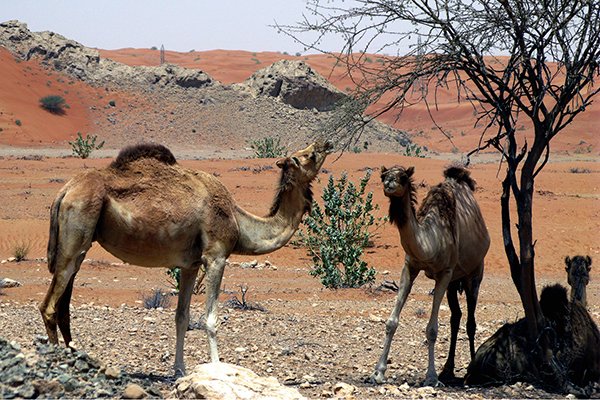 Arabian camels are normally active during the day but tend to rest during the really hot hours of the afternoon.

Arabian camels have a double row of eyelashes that they use to keep sand out of their eyes.

Because of the heat, Arabian camels have a special network of blood vessels around the brain to cool the blood before it reaches the delicate brain tissue.