The Ararat Ridge Zoo at the Ark Encounter is home to a prickle of porcupines—African crested porcupines, to be exact! Gideon and Atarah are the proud parents of Thomas and Caleb, who were born here in June of 2019.

“Porcupine” means “quill pig” in Latin. Weighing up to 70 pounds and standing 3.5 feet tall, African cresteds are the world’s largest porcupines! Found in the hilly habitats of northern Africa and Italy, these nocturnal rodents have terrible eyesight but amazing senses of smell and hearing.

Their numerous quills are made of keratin, the same protein in hair and fingernails. When God created the world 6,000 years ago, all animals were vegetarian (Genesis 1:29–31). Sadly, Adam and Eve, the first humans, chose to disobey God, and the world and its animals became cursed (Genesis 3). Now, porcupines must protect themselves from threats.

Porcupines give plenty of warning before defending themselves with their built-in bayonets. When predators approach, porcupines will flare their quills, stomp their feet, and rattle their quills. If predators don’t retreat, porcupines will turn around and run backward, jamming quills into their skin. Those quills can be up to 13 inches long, so animals who make the mistake of hunting porcupines quickly learn their lesson. However, porcupines don’t shoot their quills—that’s a myth! 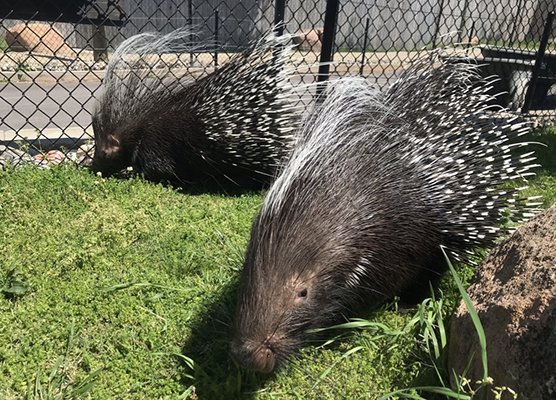 Thomas and Caleb are trained to walk on leashes like dogs, so they often appear in our daily animal shows at the Ararat Ridge Zoo!

African crested porcupines are usually peaceful creatures. They rest in burrows during the day before emerging at night and traveling up to nine miles in search of delicious barks, bulbs, roots, fruits, and tubers. As rodents, their incisors never stop growing, so those tough foods keep their teeth worn down. In fact, the word rodent comes from the Latin word rodere meaning “to gnaw.” At the Ararat Ridge Zoo, we keep antlers, bones, and logs in their exhibit for chewing. Guests may also notice a lack of plant life—that’s because they would promptly tear it up with their constant digging!

Watch this short clip of Thomas from the Defenders show, which you can watch when visiting the Ark Encounter (check the daily schedule to see which shows are playing). Thomas displays his “spin” behavior as he turns in circles on the outdoor Animal Actor Stage at the Ararat Ridge Zoo. His trainer is Shelly, our Small Mammals Head Keeper and lead porcupine trainer.